I was sitting at a cosy bar in Frankfurt, relaxing over a cold brew and nursing my aching legs after two grueling days at the motor show. The lanyard from the motor show still hanging from my jacket, turned into a conversation starter for an ex-salesman at Mercedes-Benz who asked me if a new Gelndewagen (G-Class) was unveiled at the show. He was elated that it wasn't. "The G-wagen cannot be replaced," he exclaimed. He spoke about its glory stories, how it was a fortress on wheels and ended up comparing it to the many forts and castles in Germany. Somehow the conversation deviated to history and when the man learnt that I had a week to spend in Germany, he insisted that I should visit those castles and soak in a bit of the history. I wasn't too convinced of the idea, but the roads connecting these castles surely looked tempting on the maps. I gave it some deep thought and my immediate choice was to call Mercedes-Benz the next morning and request a G-Class for my castle run. It would have been a perfect road trip. Unfortunately, the G-wagen wasn't available but they gladly agreed to send me a GLE 400 instead. Nothing like the G, but this luxury crossover is a mile muncher and I hadn't driven the 3.0l V6 petrol variant that they launched in India sometime back, so I took the opportunity to sample it. 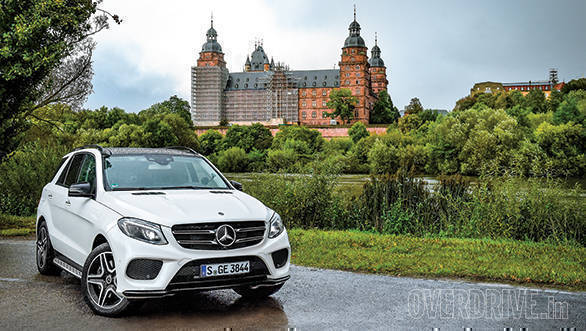 A sparkling white GLE was delivered to me the next day, with its cabin draped in dark tan upholstery and matching wood trim. It arrived so silently - something that we don't associate with such SUVs in India anymore. They are either clattering with a diesel motor or thrumming with a fire breathing power plant under their hood. I'm glad we now have an option to choose a silent and refined petrol engine to go with the understated elegance of these luxury brutes. It runs cleaner too.
I had sketched a rough plan for my travel. With four days in hand before attending a technical workshop in Düsseldorf, I decided to visit a few castles around Frankfurt and some on the route to Düsseldorf. I drove east to Aschaffenburg, which houses the Johannisburg castle from the 17th century. Easy to be confused on satellite navigation with the Johannisberg castle in Hesse, Germany or the Johannesburg castle in the Czech republic, this is one of the few perfectly symmetrical castles from the German renaissance era. Situated in the heart of the city, getting to it through the narrow lanes can be cumbersome in a big SUV. But the badge on the hood had its perks as I was allowed to park on pavement and shoot my touristy selfies. A friendly cop even marked a parking spot on my GPS that would let me get a clearer frame for the car, the castle and the river in between. 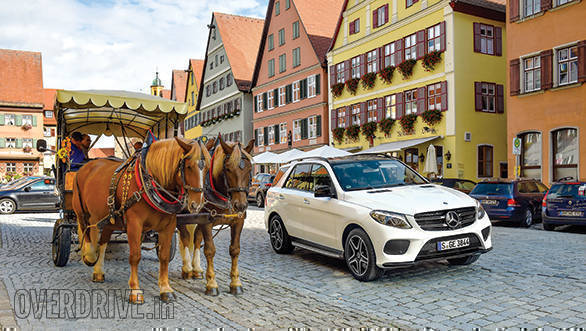 The sister towns of Dinkelsbuhl and Rothenberg have preserved their medieval architecture and are rich in tales from the Middle Ages. Germany also has a few 12th century castles connected by lovely driving roads - the kind that horse carraiges like the one seen here, could have only wished for back in the day.

My next stop, not too far away, was Rothenberg. A trading village forgotten during industrialization due to its high elevation and unfavorable trading routes, Rothenburg is well-known today for having preserved its castle walls, medieval architecture and 16th century artifacts. The village falls asleep early and driving at night through those empty streets that had no hints of modernization, the GLE felt like a time machine that had taken me back to the middle ages. Quite a surreal experience that. The following morning threw light on acres of hillocks full of agriculture fields and dirt trails around them. I couldn't stop myself from driving over and getting the car dirty. The difficulty level wasn't high enough to upset the 4MATIC all-wheel-drive and the fact that my homestay host guided me through the trails on his Honda Africa Twin, only made the day more exciting. With time on hand, I even visited Dinkelsbühl - a sister town to Rothenberg and equally famous for its medieval architecture. 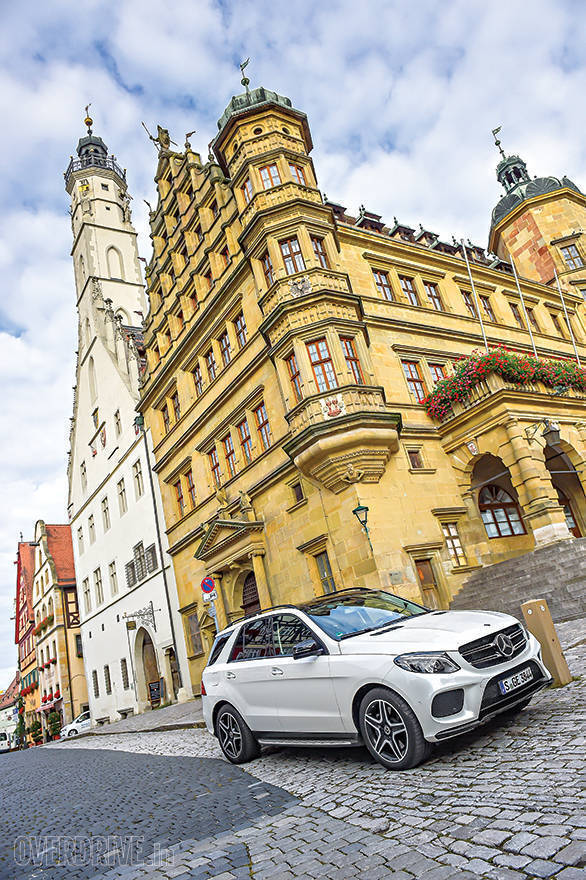 I fell in love those country roads, which before there industrialization, were paved dirt pathways for horse carriages. Since this trip was unfolding in September, just as the rains were setting in, the locals told me stories from the middle ages and how trading would see a slump in such weather as the carriages couldn't pass through the slush. And here I was, not worrying one bit about the weather change thanks to all-wheel-drive, traction control, anti-lock brakes and over 330 horses pulling my 21st century German coach.
The GLE impressed me further as I hit the autobahn on my way to visit the ruins of the 12th century castle of Heidelberg. Sprinting quickly or building and maintaining speeds of over 160kmph was no problem for the GLE 400. The nine-speed gearbox also maintained relatively low engine speeds and in turn, double digit fuel economy figures too. But what was truly impressive was the Distronic Plus cruise control system and the lane keep assist functions, which could not only vary the cruising speeds as per the traffic conditions, but also take away the anxiety of driving in the tight lanes put in place in the sections undergoing roadwork. These assists were spoiling me, but were also preventing driver fatigue from kicking in. If only the GLE had massage seats to go with it. Heidelberg was crowded with tourists, just like the next destination on my list - Burg Eltz. This too is a 12th century castle rich in history, but what makes it very popular is the locale it is set it. It is surrounded by winding mountain roads that are famous amongst bikers and sportscar groups, while the Moselle river close by plays host to yacht clubs and camping sites. There is a party atmosphere no matter what joint you visit here, but my kind of party were the curvy roads that led me to the castle. 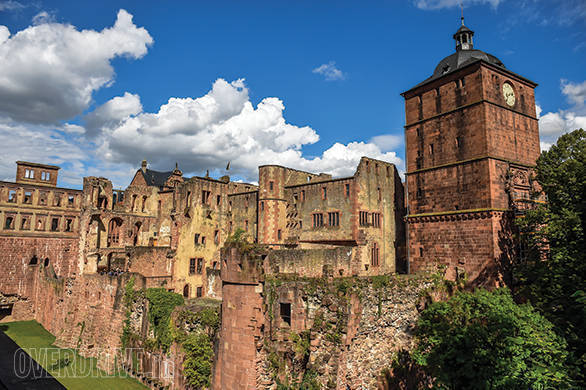 With one more day in hand, I continued past Düsseldorf to the place I love the most in Germany - Nürburgring. On my multiple trips to Nürburg, I had never visited the castle that looks over the motorsport worshipping village. A trip to this castle nestled within the Nordschleife - a site of pilgrimage motor-heads - seemed like the perfect conclusion for my castle run. Such a serene experience that was, climbing to the higher sections of the castle, gazing that the Green Hell as the sound of engines filled the air. Later, I went down to the Devil's Diner, ordered the Devil's Burger and sat at the deck where I could admire the GLE parked in the empty lot and the Döttinger Höhe (the start-finish straight of the Nordschleife) in the back drop. 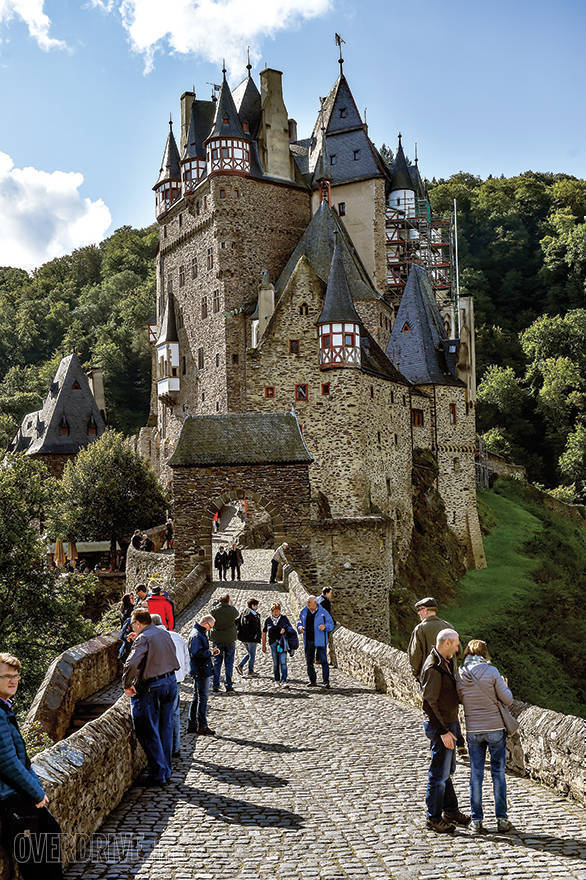 What an enriching road trip this had been and such a nice companion I had in the GLE, I thought to myself. She impressed me on the road, trials and even traffic jams and if they would open the gates to the 'ring, she would probably impress me on the racetrack too - something that the G-Class with its heft and bulk would probably never do. But, just like that my thought bubble was burst and I was proven wrong. For blasting down the Döttinger Höhe, loudly punching a square hole through the air was the camouflaged test mule of the new Gelndewagen. And now that I have seen it, I can't wait to find out what new fortress the Germans are building this time around. 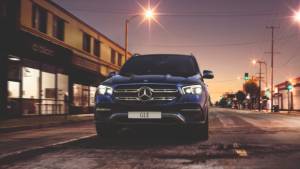 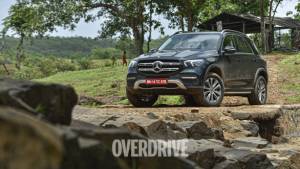 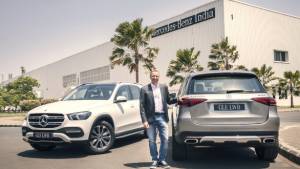