It looks like a scene straight out of a fast-paced, end-of-days action flick. There are people running helter skelter. Someone is yelling instructions on the top of his voice. Someone else is getting yelled at for a shoddy job. I see worried faces, some of which are almost in tears. There are, however, a few who've gathered in a bunch and are working together to save themselves, from elimination. 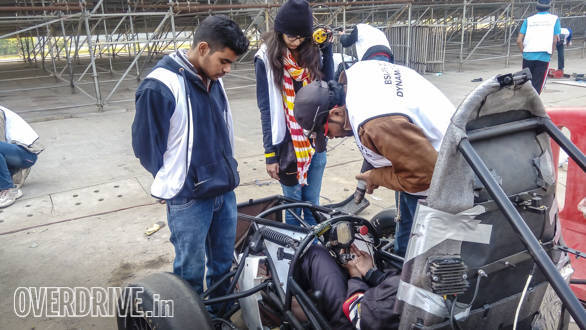 The 2016 edition of the JK Tyre Baja Student India and Formula Student India was the ultimate platform for young, student engineers to showcase their knowledge and talent. The challenge was to build a race spec buggy or a formula car within set parameters. Not only that, they have to work with the limited resources at their disposal  in terms of sponsorship, access to different types of materials, machining capabilities, types of tools and a facilities. 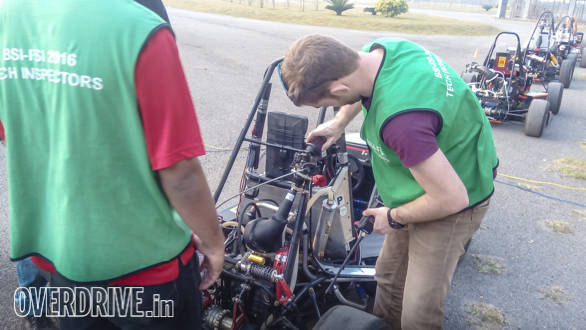 Technical Inspectors were strict in assessing the cars

Now, if you are wondering, why these students looked so harrowed, it's because they were racing against time, in a quest to get their car past the first round of technical inspection.
For most of these students, the inspectors were the stuff of nightmares. Comprising of experts from automotive design, manufacturing and business fields across the globe, these inspectors were out to point out even the minutest of flaws. A centimetre off limits, a firewall an inch too wide, use of inferior material to design the intake manifold  some of the reasons for sending the students back to the pits for rectifications. 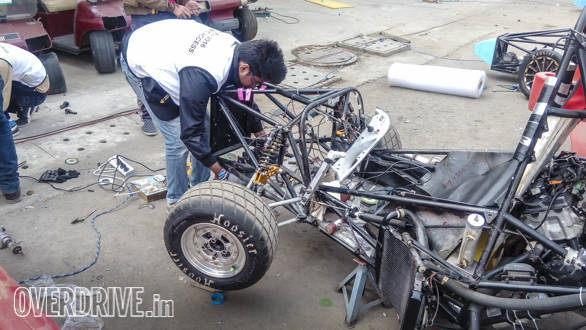 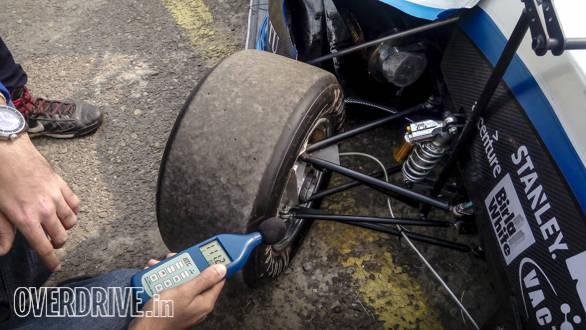 Noise test had a limit of 110db

In fact, there were a number of teams, especially in formula cars, that failed to get past the first round. Team Petrol Heads from Walachand Institute of Technology, Solapur, were participating in Formula Student India, for the first time. Over the course of three days, they made all the changes that the inspectors asked them to. An hour before the gates to the inspection area were closed, they were confident that they would clear. That's when, Felix Scherke, an experienced inspector from Formula Student Germany noticed that the steering wheel wasn't positively locked. All the team had to do now was drill a hole in the three bolts that hold the steering wheel and pass a wire that looped around them. Sadly, by the time they got back with the amends, time was up. Paras Katage, the team driver said, "The car we built turned out to be over our budget. We had to struggle to make ends meet. And now to get thrown out for a competition for something this minor is heart breaking. But we will learn from this." 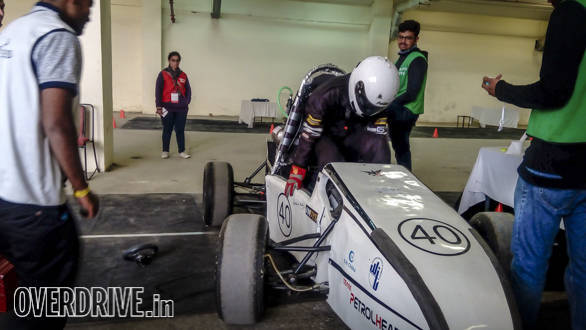 After technical inspections, the Baja buggies and formula cars were evaluated on the basis of design and cost of building. Teams had to then make a business presentation, emulating a real life scenario where they'd have to sell their car to a company. Points were awarded for each activity which would add to the final tally. 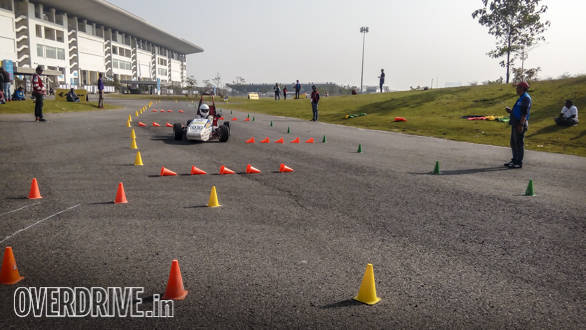 The formula cars were subjected another round of technical tests. The Tilt Test involves placing the car on a tilt table and rotating it at various angles to simulate the cornering forces on a car. Any fluid leaks and the teams had to rush to the pits. Then there was the Engine Noise Test where the sound from the exhaust was measured. Teams with readings beyond 110db were sent back. The Brake Test required all four wheels to lock up. What's commendable is that the inspectors and judges were unwilling to bend the rules for anyone. They did not care how many cars made it to the final few rounds  Acceleration, Skid Pad, Autocross and Endurance. In fact, only nine teams out of 47 entries managed to make it to the final round of Formula Student India. 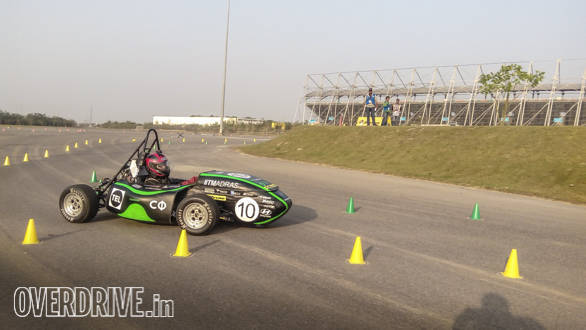 For the Endurance Challenge, teams had to deploy two drivers who'd have to drive their cars around a tight and technical course for 22 laps. There was a mandatory driver change after lap 11. Team Pravega Racing from Vellore Institute of Technology seemed to have the edge right from lap 1. Their 600cc Honda CBR engine powered car, the only one with a huge rear wing, was flying through the course. But lady luck had other plans. After a few laps and almost catching up to a back marker, their car broke down, a failed drive shaft being the culprit.
This gave Team Orion Racing, Team Raftaar from IIT Madras and Team Camber Racing from SRM University, Kanchipuram a chance at winning the Endurance round. In the end, Team Orion's car managed to complete the required number of laps in the shortest time. It was their car's carbon fibre construction, usage of anti roll bars up front and at the rear, as well as the KTM 390 engine that made it the right package. 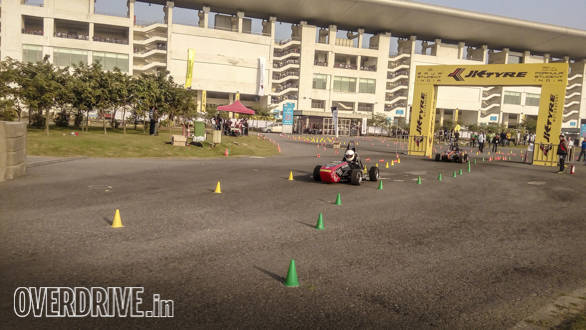 In second place were Team Camber Racing who were also amongst the first to have cleared technical inspection. In third place were Team Raftaar who missed out on the second spot by a few points. However, what made the entire crowd stand up and applaud the team in P3 was their incredible composure in the face of adversity. During the technical inspection, the inspectors found out that the car's roll-over hoop was off the desired specifications by a mere 1mm. Now at this point, usually a team would pack up and leave because rebuilding the chassis is a tough task. But Team Raftaar rose to the challenge and rebuilt the chassis over the course of a single night. Eight hours to be precise. Dedication and perseverance surely got a new definition that day.
There was also The Spirit of FSI 2016 award, (Formula Student India 2016) that was presented to Pravega Racing. This was in recognition of their readiness to assist other teams. 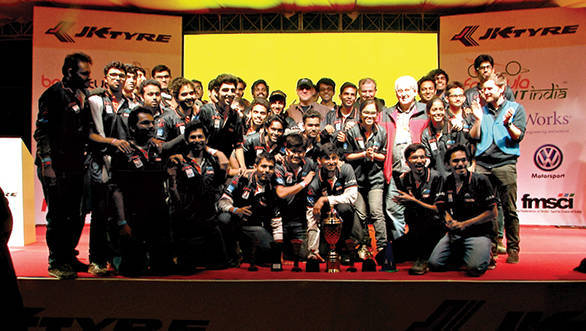 The situation with teams for Baja Student India was not as challenging. While many teams were sent back after the initial round of technical inspections, they managed to alter the buggies and get them ready in time. All the static rounds were almost similar to the ones for FSI except for the Weight Pulling and Manoeuvrability Test. In the former, the buggies had to tow a Mahindra Scorpio up a slight incline, to demonstrate the pulling capabilities of the buggies. 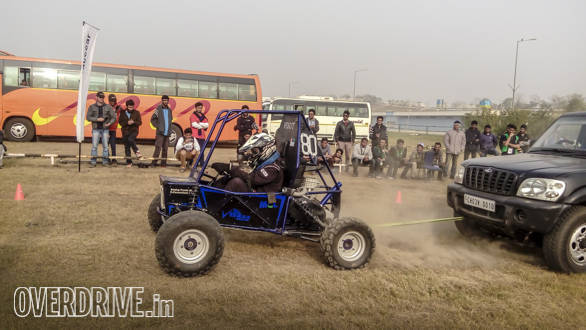 The Manoeuvrability test on the other hand gauged the ingenuity of the design. Drivers had to negotiate a tight and twisty track which consisted of deep pits, banked curves, switchbacks and a mini hill climb. While the smaller, lighter buggies managed to fly through the course, most of the heavier ones barely made it past the first pit. 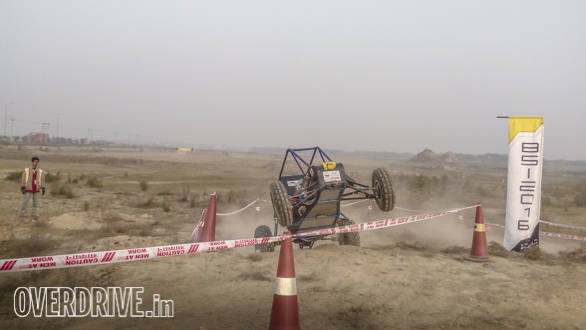 Here's where their engineering knowledge was put to the test. How to design a buggy that's light yet robust? The Baja buggies use a standard Briggs and Stratton, Intek series engine. This meant that students had a fairly level playing field to begin with. The dimensions, the materials used to design the chassis and bodywork, the suspension components, the wheels is what the teams had to design by themselves. The final challenge, the Endurance race, was extremely difficult for both student and machine. They had to drive around an obstacle course for over three hours while aiming to nurse their buggies over the treacherous terrain. The team with the maximum laps covered would eventually win. It was particularly hard for the drivers who had to drive with limited visibility due to the mud being kicked around. Most of it was from the tyres of their own buggies. 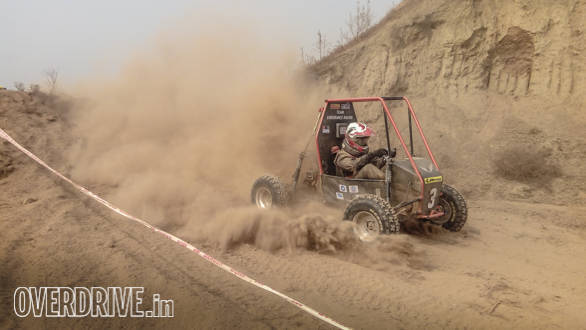 As the number of laps progressed, the casualties increased. Many buggies suffered damages, the most common form of which was a broken ball joint at the
front axle. 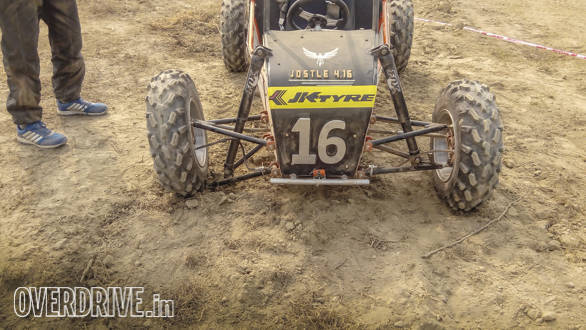 The tough part was towing the buggy back to the pits where the teams tried to repair their stricken buggies and get them back on track. The buggy belonging to the winners of the Endurance race, Forza Racing, did not suffer a single break down. They were also the fastest team to replace a clogged air filter and the fastest to refuel. Eventually, it was their ability to fight pressure and swift pace that helped them bag top honours at the Baja Student India 2016. The team also finished second in the weight pulling and business strategy events. 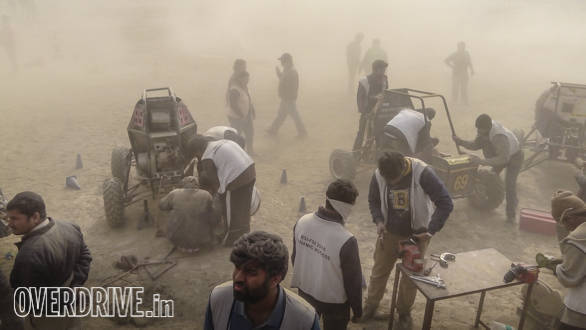 The hot pits were a challenging environment to work in

The Road Runners from VIT, Vellore came second. They put up a major challenge to the winners but third place in Acceleration, Manoeuvrability and Weight Pulling events meant lower points. Ending up at third, Team Piranha Racing of MIT, Pune also did well in the Endurance race where they ended up at third position and second in the Cost event. 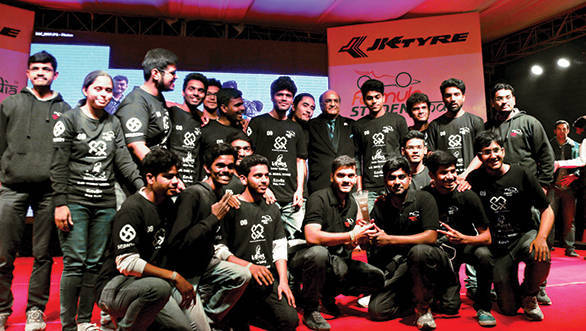 The 2016 JK Tyre Baja Student India and Formula Student India were a great success. The judges were impressed with the improvement in car design over the last year. The event tested the students' ability to build a technically sound car. It challenged them to meet deadlines. It made them rack their brains to figure out solutions. So on the whole, they ended up learning a lot. 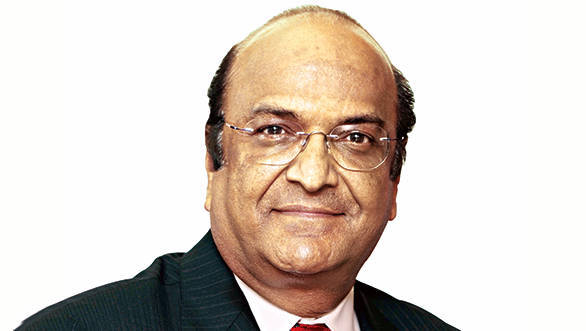 "I was walking through the pits where the student teams were working and it's fascinating to see the involvement, the creativity, the type of designs that they have mustered, and the enthusiasm. I got a chance to talk to some of them. They have been working extremely hard and have committed a lot of resources. They are most excited about the outcome, the performance of their little vehicles which have been so well created. I think the BSI/FSI is a great thing to do. We look back at it with such affection. We've been associated with Baja since 2008. We are also heading towards formula cars. The event is a great opportunity for the students to learn, for the students to perform and create better engineering knowledge in their respective fields."

Steven Fox, Design judge ,
on the improvements at BSI/FSI 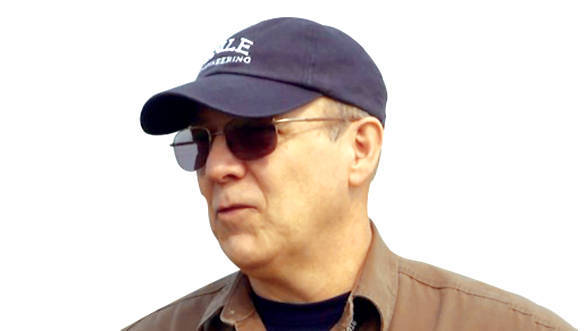 "The thing that I look forward to the most when I come to Formula Student India is that I see a much better grade of engineering and car construction. That is what we really strive for. In fact, that is what the design event is all about  teaching young college engineers how to do the job in the best way possible. So if they do an efficient and lightweight design, it performs really well on the track."

Dr Christoph Hahn
Design judge
on the significance of BSI/FSI 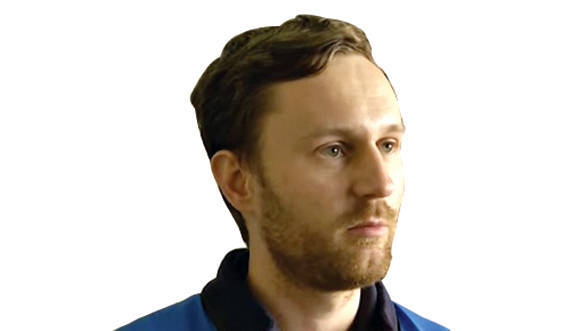 "The students acquire practical experience that cannot be taught at universities. They learn project management. They have a 20-25 people team and they have to coordinate decisions and execute them. They learn practical skills plus soft skills. Here they are presenting the car to the judges which is like presenting it to board members of a company. All of this is very important for their future career."

Pat Clarke
Design judge
on what students should focus on for next year. 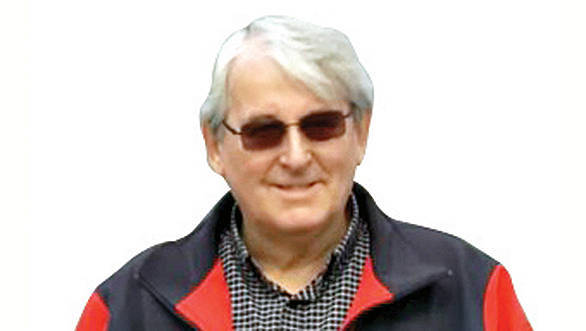 "I explained to them that it is really important to pass down information to students coming next year. You don't want the team coming next year to make the same mistakes. So they really need to log all their errors, their experiences, what worked and what didn't work and that's not just about the car. That could be about how do we feed the team, all that sort of stuff. Pass that on to the team and they just keep getting better and better."