The Paris-Dakar is a race of legendary proportions. Competitors fall by the wayside in droves every year, failing to accomplish the impossible as the days and thousands of hard kilometres accumulate. Some will die attempting the Dakar. But despite everything you've read, you don't get the scale of the event until you've actually stood in the sand watching motorcycles roar by, helicopters fly by overhead in an angry throb of its rotors or feel the anguish in the bivouac as a vehicle or racer realises that their race is prematurely over. But let me try and show you what I saw as I visited the Dakar 2018 as a spectator. 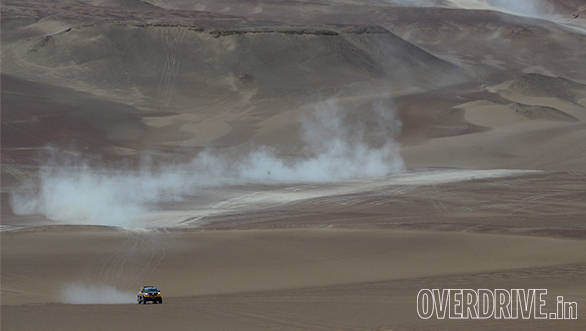 It's a year of work

It's easy to get suckered into thinking that the racers and teams wake up in August and start preparing for the January race. They work all year. And when their vehicle fails, or the sand catches them out, it's a full year of work gone to nought. And most of them are the most optimistic people on Earth. They take their broken ankles, blown engines and shattered frames and go back to work. "We need to prepare better for the next year's Dakar," they say with a rueful smile. The end of the race at a lonely waypoint in a deserted stage is heartbreakingly tragic. And the optimism with which the teams attack the problem as a learning for the next year is perhaps the most uplifting thing of all. 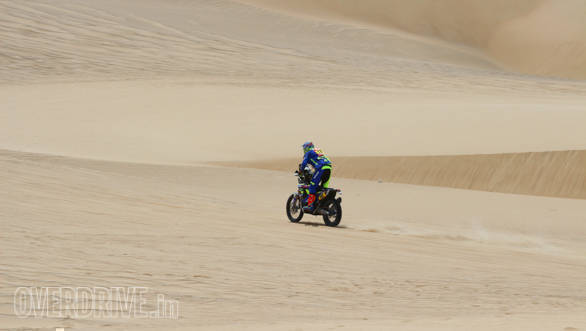 We cheered long and hard when our boys went past - that's TVS' Aravind KP and Hero's CS Santosh, but their team-mates, Joan Pedrero (in the pic), Adrien Metge, Joaquim Rodrigues and Oriol Mena weren't spared either.

We were standing at a vantage point on the first stage. A short 32km loop in the sand north of the beach resort of Paracas. The racers would arrive from behind our tent and fly up a steep dune in three stepped slopes that grew ever more vertical. At the top, they'd make a curving turn right to meet the crest, all the while climbing hard. As the sand got more and more churned, the vehicles began to struggle. One car got beached so many times that it was hard not to suppress a cheeky snigger. But your heart melts when you see the determination on the part of the driver and navigator. This particular car was having a really bad day. It took them numerous attempts over the better part of an hour to get over that crest. And by then, two trucks were also well stuck on the same climb. But they never gave up. It's hard not to feel a swell of optimism when they finally crested that dune and went their way. 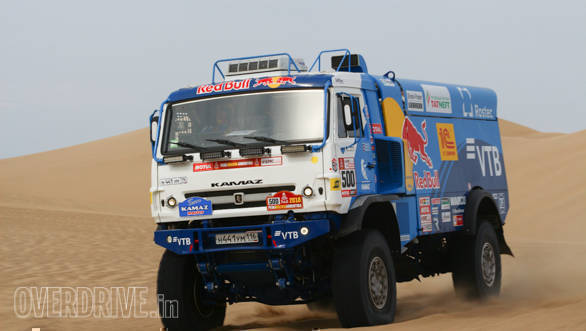 The race trucks are truly impressive. They don't slow for much using their huge momentum to bulldoze past everything

The Originals are all nuts

The Malle Moto class was renamed Originals this time. They're the hardest racers of all. They operate as one-man teams living out of a trunk, relying on the organisers only for food and on their lone assistance truck to carry one set of spare wheels and tyres. They race all day and work on their bikes by themselves. The most famous of them is Lyndon Poskitt, who made the rather watchable documentary on his entry into the 2017 Dakar. 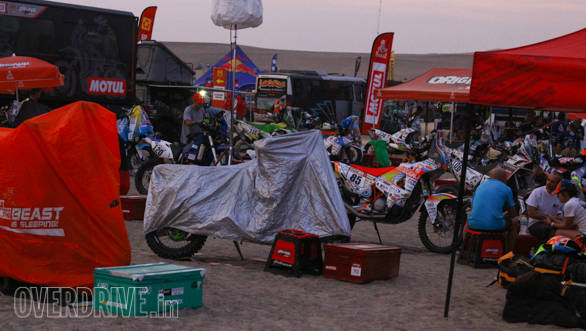 The Originals class has the hardest racers of all. They work on their bikes after racing and have no access to outside support.

I met him after the first stage and he turned out to be an affable, easy-going chap. Juggling easily the idea that he's done the stage, still needs to work on the bike for tomorrow, needs to film his bits for the YouTube releases and has people like me who want his time. And he isn't alone. They're considered nuts even by a camp full of certifiably masochistic racers. 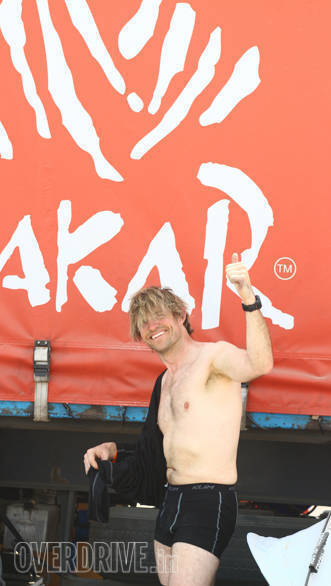 While in the cars and trucks, navigation is a task handed over to an individual, the motorcycle and quad racers must ride and navigate simultaneously. And often, you will see their heads look down and then back up as they ride. It's an enormously complicated process to be sure. And when you walk into the bivouac after a stage, you'll see the likes of TVS' KP Aravind fretting about getting to the next day's road book. 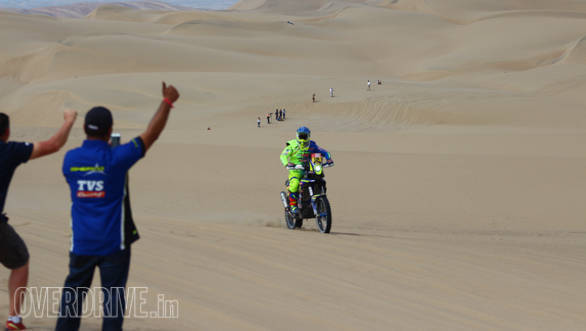 He told me, "The road book is in three columns but you can't read all three on the go, it's too much work. So the racers will sit with markers and highlight the important bits, transferring things like speed information back into the two columns by hand to ensure they can navigate at speed." I thought it would be something that they'd accomplish in one go. But it isn't. It takes concentration and time and often, the riders will work 45 minutes to an hour before needing a break and going back to finish it. On a 500km stage, the number of instructions to be processed numbers in the thousands. These aren't just great riders, they're interpreting graphical data, working out how it applies to the real world and doing mathematics in their head on the motorcycle.

The flights to Peru take over 20 hours in just flying time from India. Add airport security and transit times and this race is well over 30 hours away from us. You arrive exhausted, jet-lagged and unprepared for the sheer scale of the Dakar. 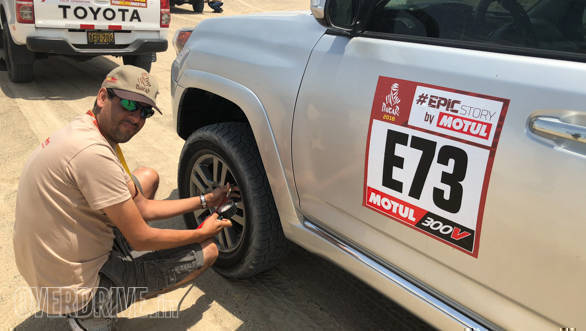 Heading into the dunes for spectating means ultra-low tyre pressures to get into the sand.

But this remoteness is also a huge challenge to the teams participating in the Dakar. Both TVS and Hero have to work out how to make the race reach the Indian audiences in a meaningfully widespread manner. This time, I was trying to be live on Facebook from the event. And it was hard work. At the juiciest parts of the stages, it was 3am in India. And as I write this, I'm 24 hours into flying home. And I am still well over 8 hours from landing in Mumbai.

The scale of the Dakar is hard to explain

On the noticeboard outside the canteen that everyone eats at is a small sign. It says that the Dakar uses 10 planes and 7 helicopters. Serves 12,000 bottles of water and over 10,000 meals a day. 800 people are part of the organisation and so on and so forth. This is not a comprehensible scale for a human being. You cannot grasp the meaning of a stage that has 264km of liaison and 540km of specials. It means the racers have to ride within legal speed limits and all for the equivalent of the run from Delhi to Jaipur. And then race unknown stages following their road books at flat out pace for the equivalent of the run from Jaipur to Jaisalmer. This is not for a day either. This marathon stage arrives seven days into ever harder racing. To be handled amidst a crippling lack of sleep, a machine that's suffering incredible punishment and the pressure is enormous. 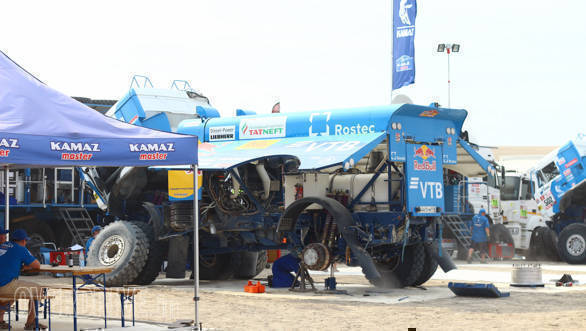 Wow. That truck is mostly just an engine!

The teams have it no easier!

And if you think the teams have it easy, they don't. They have to be fully ready to handle an unexpected complication until the rider is flagged off onto the stage. And then they have to fold up their tents, tools, spares and people into their trucks and vans. Then they drive as hard as they can within the legal limits of public roads to the day's camp. And once there, they have to unpack the setup and be ready for the rider when he arrives. For 13 days end over end. The mechanics will have to inspect the bike thoroughly for breakage and damage daily. Service it thoroughly daily. Change tyres daily. Give it a wash and a final going over daily. And when they encounter problems, as is usual towards the end of the rally, work overnight to get the machines back to race-form by the morning flag off. If you and I were to just attempt to stay awake for the hours the mechanics do on the Dakar, we'd be blubbering idiots by the 13th day. 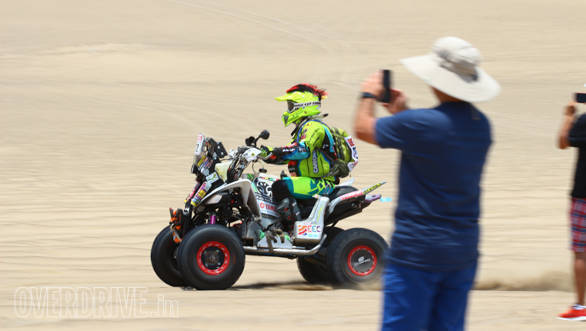 On stage 1, the quads were the first to come past us. And as you can see, spectators get very close to the action

And yet, they're all smiling

The true nature of humanity is that we don't want everything to be super easy. We like a challenge. And nowhere is it easier to see than at the Dakar. These men are all volunteers. From the ASO staffers to the mechanics and racers. Whether paid or not, they all signed up because the Dakar is an impossible adventure. 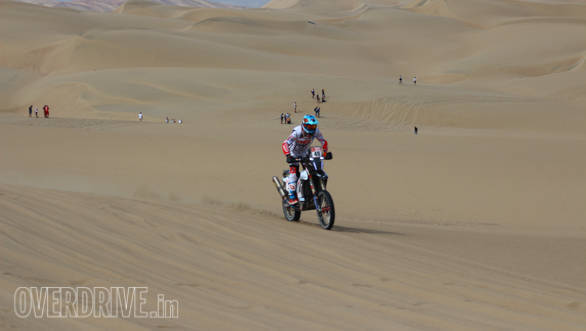 A personal battle for each and everyone that all of them hope they'll win. Some won't. Some will return to fight it again. Others will reluctantly accept defeat. Many will triumph. And when they're walking back from the parc ferme after taking the finish podium, you'll see it on their faces. A mixture of utter exhaustion, extreme relief and a glow of achievement that will drown out the sun. That's the Dakar. A place where they arrive boys and leave as men. Where mere human beings do things only gods should be able to.