Driving the Polaris RZR on ice in Arvidsjaur

Ever had a crash course in intimidation? Well, I had the privilege very recently. It happened when I headed to an ice driving track in Arvidsjaur, Sweden, with a bunch of seemingly regular individuals who had all, up until that point, been laughing and chatting away with me about life, the universe and everything. En route our frozen destination however, amidst jokes of who was likely to be the fastest at the track, it slowly dawned on me that there might have been the slightest possibility that I was a little out of my depth. You see, one of the merry bunch happened to be a former Volkswagen Scirocco R Cup champion. Another happened to have two racing world championship titles under his belt. The third fortunately had no racing pedigree, but did casually mention how he was accustomed to spending the first three months of each year driving on ice. 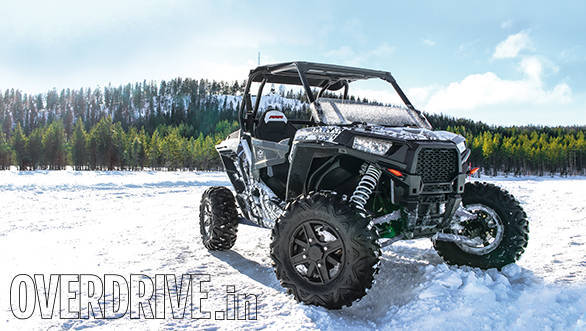 The good thing was that I discovered the startling advantage of my balaclava having slipped off during the bumpy ride to the ice track. My face was frozen solid, which meant that I had no expression whatsoever, and no one could tell just how disconcerted I was by all this talk of who'd be the fastest. Or maybe they could, because one of them turned to me, grinned, and said, "No pressure!". 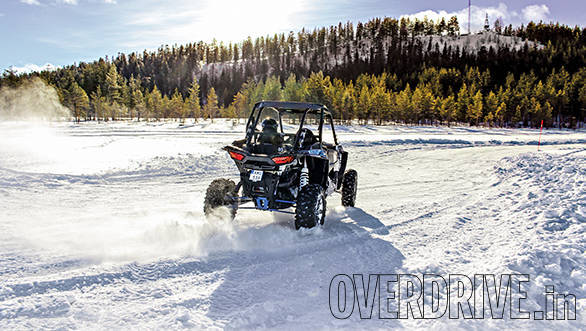 So it was with some effort that I swallowed a few expletives that were threatening to escape my lips and turned in the direction of our helpful Polaris RZR instructor, only to realise he wasn't there any longer. No indeed, Roberth Möller's RZR was a rapidly disappearing speck in the distance, leaving behind long trails of snow. There was really nothing to do, but get on with it, then. 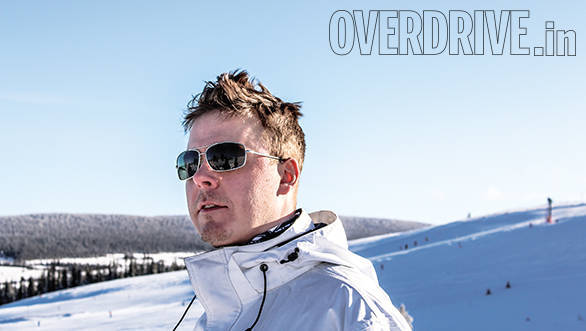 As I was to discover on my first lap of the ice track, when everything around you is a rather stark shade of white, and the snow is falling steadily, and if you happen to be used to driving on a strip of grey road on a regular basis, then finding where exactly the dratted track is can be something of a challenge. The tricky bit isn't that you can run off the frozen surface and find yourself in soft snow, it's that there is every chance that you'll ram into a wall of solid ice, which won't be a good thing at all. Not for you or your co-pilot, nor for the rather menacing looking RZR 1000.

A couple of laps into the session, with the challenges of finding the track out of the way once my eyes adjusted a little, and a co-pilot constantly egging me on to look deeper into the corner so that I can hit the apex correctly, I am beginning to get the hang of things. Admittedly I'm a little slower than I'd have liked to be at first. You see, the RZR, as I realise, is easy to get sideways thanks to its short wheelbase. More than that, though, it's easy to spin. Which means that when I try to get up to speed on this thing, given that we're on ice, I find myself doing merry pirouettes, with my co-pilot threatening to revisit in great detail what he had that afternoon for lunch.

But it is time to get serious about things. One too many 'the world is rushing past me' moments, and my co-driver sternly says, "Do you want to be a driver or a passenger? If you want to be a driver, you need to act. If you want to be a passenger, then react. But remember, reacting means there is a delay already." Thus begins my first proper lesson in driving on ice. I learn, that like at any racetrack, and you need to stick to the inside. So I turn my steering nicely, put the nose of the RZR into the corner, and maintain a steady throttle. If you get too much on the gas, you end up sliding away to the outside of the corner. Get off the gas, with the steering intact and the RZR slips nicely back where you want it. To go to the next corner, then, just flick the steering (no hassles of changing gears because the RZR has an auto 'box) to the other side, and hold it steady. Sideways fun.
But wait-a-minnit. Uh oh! That's not the direction that I want to be heading in. Oh dear, now I'm pointing quite the wrong way. Spin city once again, then.

My co-pilot suggests one thing, switching from the RZR 1000's all-wheel drive mode, to rear-wheel drive. It works. The RZR immediately feels easier to control on ice, the studded tyres getting a proper grip on the white stuff, pointing the way I want them to point, and helping me catch and hold a drift from one corner to the other. Switching back to all-wheel drive, though, I am still struggling with holding a drift. My co-pilot tells me that since I haven't any experience driving on ice, I'm not responding to the feedback my steering is giving me and modulating my throttle according to it. When the steering becomes too light and there's no grip, it's time to get off the gas, but shivering little me, frozen nose and toes, hair full of snow, appears to have very slow reaction times. 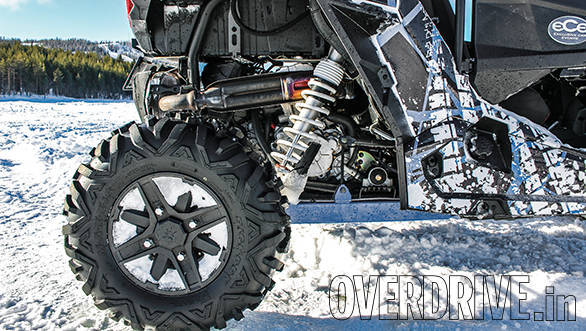 Studs are a must for driving on snow

Time for lesson number two, then. I am to only steer the RZR, with my co-driver reaching all the way across to modulate the throttle. I slowly realise exactly how to stay in a corner and when to flick the RZR around. And given that we're always at the right speed, the tyres hold the surface well and I am more accustomed to the feedback the steering is giving me. The RZR's 999cc engine puts out 110PS of power and, given that it weighs approximately 630kg means it is light enough to move fast, but not so light that you need to lift off the gas. When the accelerator pedal is back under my foot, we do have a couple more spins and a couple more moments getting stuck in the deep snow banks. But we do okay at the end.

The snow, by now, and in stark contrast to the photographs you see here, is coming down in thick cotton ball like tufts. Visibility is poor. So poor in fact, that we haven't been able to see our competitors manage to topple their RZR 1000. Ha! Amateurs! But with darkness taking over, it's time to return the RZRs to their stable. We'll have to shoot another day.

So it is that we once again find ourselves knocking at the door of the good folk at Exclusive Car Events, and troubling Roberth to take us on another little RZR expedition. You see, Roberth is a born and bred Arvidsjaurian. And he's been riding all manner of snowmobiles and RZRs since he was "this high" he says to me, pointing a little lower than his knees. And it turns out that for people who live in Arvidsjaur all through the year, snowmobiles, and slowly RZRs too, have become a valid and most practical form of transport. "If I need to go down to see my friends after work, I just take a snow mobile. It's much quicker than taking the car, and you can use any trail that you want." It's a little more tricky with the RZR though, because it's wider than a snow mobile. But it does have an immensely practical side to it too, with something akin to a boot in the back that helps you stow away spare tyres and the weekend shopping too. 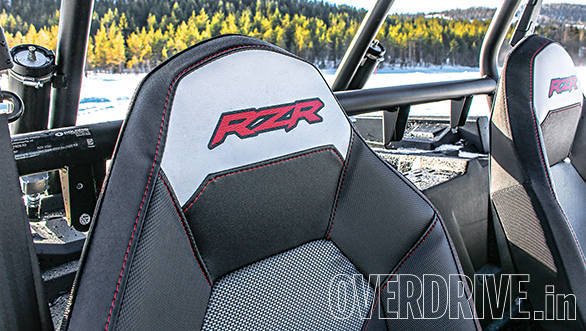 . . . While the co-driver gets this grab rail to hang on to

As we drive through the streets of Arvidsjaur to go shoot a few photographs of the RZR in action, it turns heads. Old people look at it like they've seen something out of the ordinary and let go of their walking sticks, kids tug their mothers' hands and point 'Lookie! We want!', and the teenagers in Arvidsjaur who appear to be partial to long wheelbase Mercedes-Benzes from the 1970s and 1980s, turn their heads ever so slightly, their faces betraying no emotion, but their eyes glinting with desire. Oh, it's a striking looking machine, indeed, and you can even hear it coming from a mile away.

After we spend some time thrashing the RZR around a frozen lake again, this time fortunately with the sun shining down on us brightly, Roberth decides that we must head to the top of a mountain, past the ski slopes. Well, it sounds like a good idea. And the drive up to the ski slopes, over bumps and ditches, through narrow trails that snake through the woods, and across mounds and mounds of snow, proves what the RZR can do. It absorbs every bit of undulation without letting you feel it in your spine. Of course, the suspension travel means you do get tossed about a little, which is why the passenger's seat has a handy little grab rail that you can hang on to for dear life. 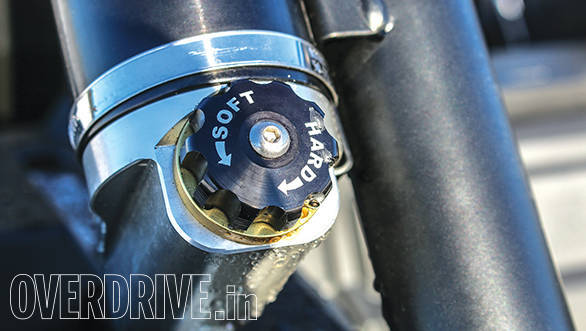 Now we're at the ski slope then. And there's an incline stretching ahead of us that we don't believe anything can scale. "I'll just go see if it's possible to get up there," Roberth says to us. And he's off, disappearing into the distance again, the RZR appearing like a tiny little spider crawling up a white wall. Ten minutes later he's back. "It's fine, just don't get off the gas on your way up."

So it is with the pedal mashed to the floor that we make it up, avoiding getting stuck in the deep ruts of snow. We're on the very top of the mountain. Far above the ski slopes. It's as if the world has stood still here. Time has frozen. And along with it, everything else too. So what is it about driving a Polaris RZR 1000 in the ice, then? Well, standing there looking down on the snowy slopes, in a place where it appears that time has stood still, the RZR is the only reminder that it hasn't. It is a testament to the progress of man made machines, and it has a special charm in that it let's you do exactly what you want to do, with somewhat minimum risk. You can throw up heaps of snow as you tackle a corner, and pretend like you're in an icy version of the Dakar Rally. You can 'yump' the thing and pretend you're Erik Carlsson in the Saab 96 tackling Colin's Crest with aplomb. You can drift and drift and drift, seemingly endlessly, and practise the finer points of the Scandinavian flick. Essentially, it is a dream maker. Part car, part motorcycle in ability, and complete childhood motorsport fantasy realiser. And there aren't too many machines that can boast credentials such as this.

Thanks to Jan Edvardsson and Exclusive Car Events for giving us the Polaris RZR to throw around in ice.