They say the best cars aren't designed with a scale or a ruler, but are drawn freehand. But looking at a car like the Lamborghini Countach, arguably the most famous of Marcello Gandini's designs, most would also beg to differ. Gandini, one of the pioneers of the wedge-shape in automotive design, with the Alfa Romeo 33 Carabo concept shown in 1968, has a penchant for angular designs which can take your eye out just by looking at them. 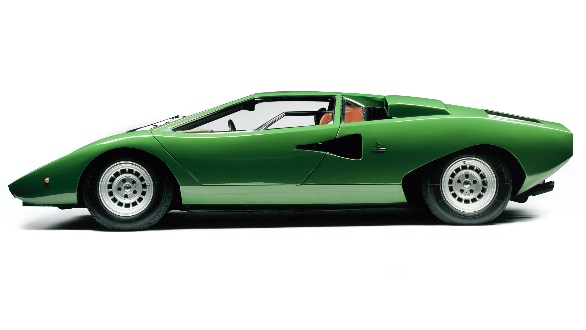 Lamborghini Countach LP400, the poster car for the wedge design 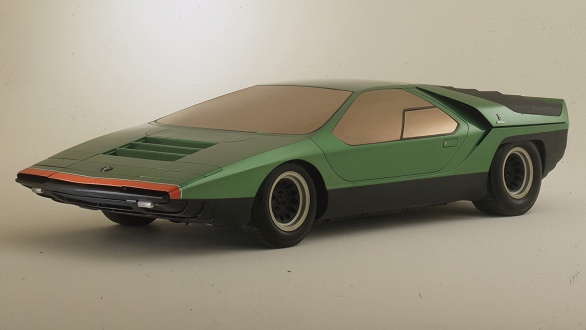 The Alfa Romeo Carabo concept actually preceded the Countach, and clearly inspired it

He also pioneered the vertically opening scissor door with the Carabo, which could literally take one's eye out if one wasn't careful! The wedge shape wasn't born out of fancy either but from an understanding of aerodynamics at the time. The lower the nose of the car, the less air going under it and creating lift, while a slanting top surface and vertical rear helped smooth the flow of air. No wonder then manufacturers like Ferrari, Mercedes-Benz, Porsche, BMW and Lotus to name a few, all had wedge-shaped models, while it's become something of a signature for Lamborghini.

It also was something of a signature for most supercar designs from the '70s and '80s, and of the other great Italian designers of the era, Giorgetto Giugiaro and Leonardo Fioravanti, both of whom share the same birth year as Gandini. And who all grew up, and worked, within a few hundred kilometres of each other, and who have collectively had more influence on car design than any other. Was it something in the water? Or the tomatoes, perhaps? More likely, is the fact that Italian coachbuilders and design studios of the time didn't use clay models in their design process, instead using plaster models which were harder to shape curves into, and left little room for error  forcing straighter lines and a deliberate chiselling hand. 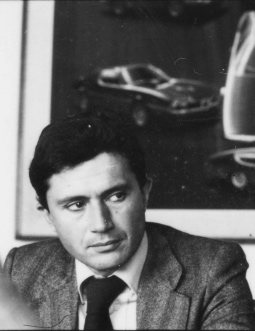 Gandini, born to an orchestra director in Turin, was given to study music, but an early introduction to Meccano sets and a chance sighting of the impressive Cord 812 tourer fed a fascination for all things mechanical. It wasn't long before he tired of the arts school that he attended, and he took to tinkering with friends' cars, usually tweaking bodywork for race purposes. With no formal education, he set about interior and even furniture design work in his early 20s. When a friend brought him his wrecked OSCA Barchetta to create a new body for, the wheels were truly set in motion. It's said that he applied to Nuccio Bertone's design studio in Turin but was turned down, because the chief designer at the time, Giugiaro, had threatened to quit if Gandini was hired. But a few years later, in 1965, Giugiaro left to join Ghia, and Carozzeria Bertone had an opening for a young Gandini, as chief designer no less, a position he would hold till the end of the '70s.

Gandini stepped in to fill Giugiaro's shoes almost instantly. In doing so, he inherited the responsibility of designing the bodywork for a ground breaking, mid-engined Lamborghini supercar - the P400 project his predecessor had extensively worked on already. With much tweaking to be done to the design and mechanicals of the car, both aspects to which Gandini contributed, it was barely ready in time for its appearance at the 1966 Turin motor show. 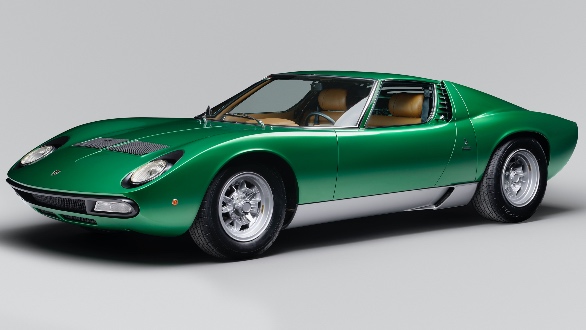 Arguably, one of the prettiest cars ever built, the Lamborghini Miura P400 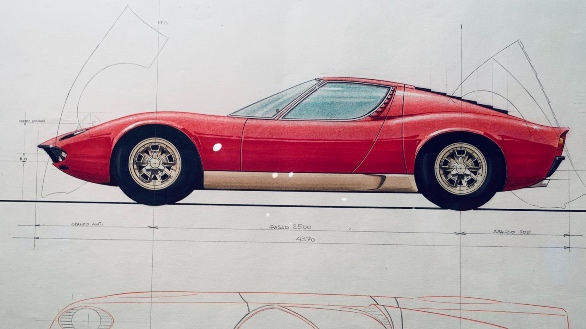 This car was the breathtakingly beautiful Miura, and announced the arrival of a young designer named Gandini. Of course, rumours were rife as to whose design it was but by most accounts, the final car had the basic proportions of Giugiaro's design, all tied together organically by Gandini, who also led some technological revolutions in repositioning the car's radiator. 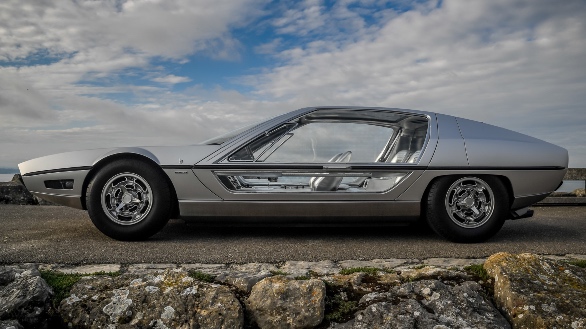 The very next year, Bertone and Lamborghini would once again stun the world with the Marzal show car, penned by none other than Gandini. Under its sci-fi skin, the Marzal was essentially a stretched Miura, with an extra low beltline so as to have a larger glasshouse - you can tell it worked. 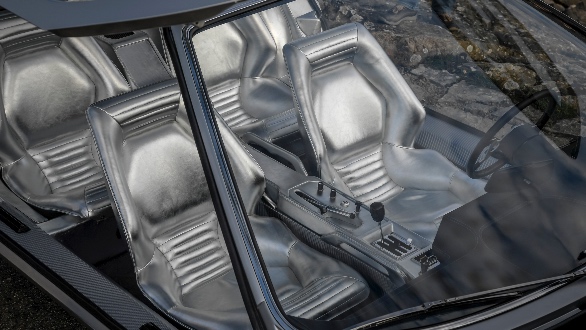 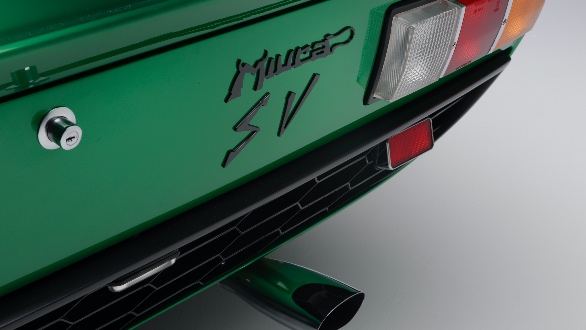 Recognise the hexagonal motifs that continue on in current Lamborghinis as the Y-shaped epsilon?

Granted, the silvery reflective seats didn't really catch on but the hexagonal elements in the trim and cabin, as on the Miura, are design elements modern Lamborghinis still reference, over 50 years later. It also gave birth to the V12-engined Espada, a genuinely spacious four-seater Lamborghini supercar, the likes of which the world hadn't seen before, and would not see again until the Urus came around a few years ago. 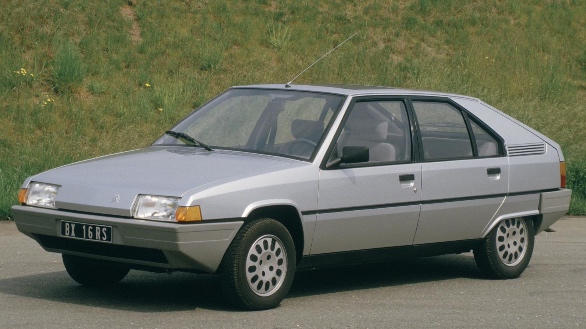 Gandini already seemed used to breaking the rules of design, to good effect. The little-known Fiat 125 Executive is proof that daring designs didn't have to only be applied to supercars. Its low belt line, combined with a shoulder line that was higher at the rear of the car gave it more boot space than a car of its size was expected to have. Like the Fiat, other Gandini designs that flew under the radar, like the BMW E3 proposal that became the New Six, had their fair share of influence on future cars from brands not necessarily associated with Gandini. 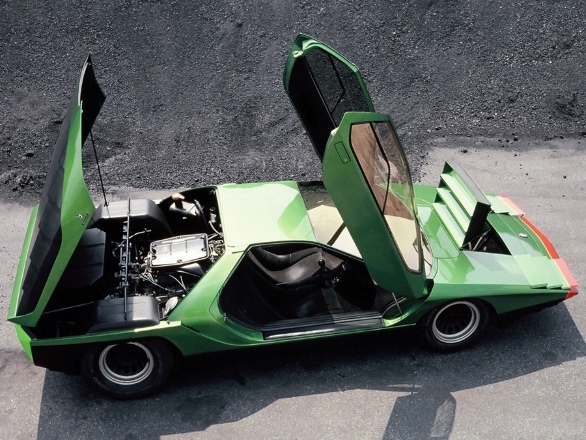 Gandini pioneered scissor doors on the Carabo concept, before the Countach became the first car to carry them to production

However, the car that really put Gandini on the map didn't come till the '68 Turin motor show, in the form of the Alfa Romeo Carabo concept. It couldn't have been further from the voluptuous styling of the 33 Stradale on which it was based. From the lithe, flowing lines the world was used to seeing in the '60s, the Carabo came as a huge wedge-shaped culture shock. Forget about seeming to be from the same era, the Carabo still doesn't even look like it came from the same planet as the Alfas and Ferraris of the time! Named after a beetle, and painted in said insect's iridescent shade of green, the sci-fi Carabo set a trend for the wedge, that would be followed right through to the mid-1980s by every manufacturer from Ferrari to Nissan! Not to forget that it pioneered the scissor doors which were to become a Lamborghini trademark, and directly inspired two of the most iconic cars ever made - the Lancia Stratos, and the Lamborghini Countach.

Enter the Lancia Stratos Zero concept, based on Lancia's Fulvia chassis, just placed the other way around. It was so low to the ground at the front, it even had a rubber mat as a hood, for the driver and co-passenger to wipe their feet as they stepped in through its flip-up windscreen. 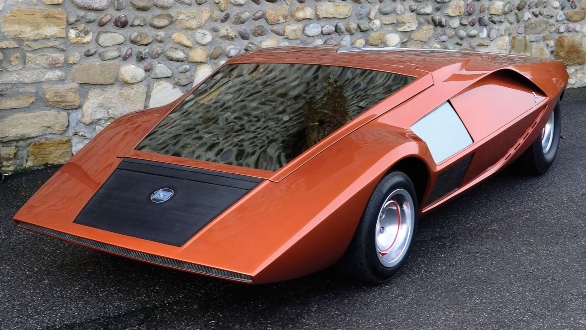 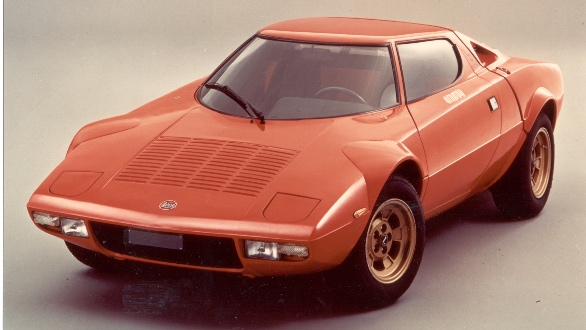 From the Zero came the homologation-special Stratos, built for rallying and powered by a Ferrari-sourced V6. It's said Gandini looked for the shortest wheelbase cars around, found the likes of the Alpine A110, and then tried to undercut them. The packaging and chassis design for the Stratos is something Gandini was personally involved with  no mean feat considering the constraints of fitting a V6 in something barely 3.7m long! 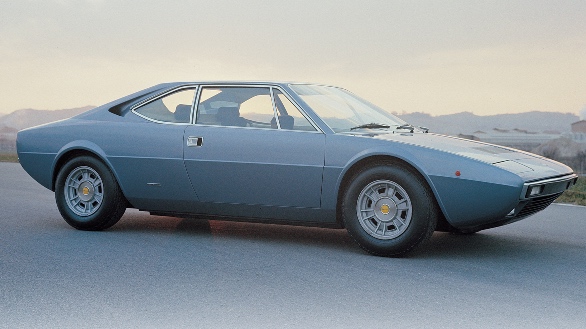 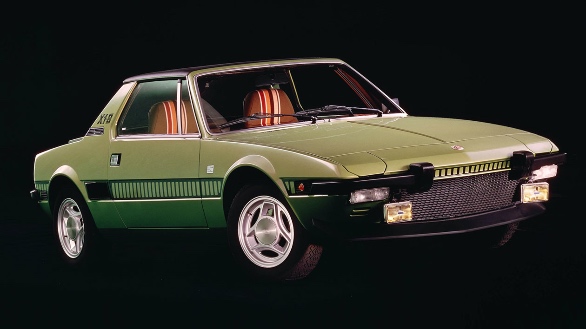 But the Ferrari-Bertone relationship continued on. The Dino 308 GT4, penned by Gandini, arrived in 1973 and heralded a lot of firsts for Ferrari. The first to be styled by someone aside from Pininfarina since the 50s, the first with a V8, and the first mid-engined sportscar with 2+2 seating capabilities. It also had styling cues linking back to the Stratos, in its wedge-shape, scalloped C-pillars, flared wheel arches and stubby rear. A look Gandini did quite well, having first penned the Autobianchi Runabout concept. A concept that morphed into the gorgeous Fiat X 1/9 sportscar, which seems like a bucket of fun, just from looking at it. 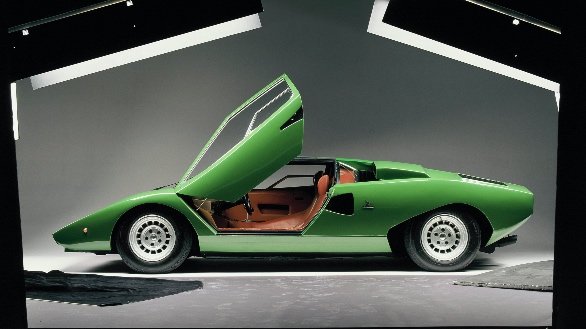 Which brings us to the poster boy of poster cars - the Lamborghini Countach. It was like Gandini's greatest hits all rolled into one. It exemplified the wedge shape, scissor doors, asymmetrical wheel arches, pop-up headlights, and truncated rear that Gandini had perfected. It was so outlandish, it's still hard to believe it made it to production! As a part of Bertone, Gandini had penned cars for everyone from Alfa Romeo to BMW to Citroen, and his signature touches would show up every now and then across these brands, especially in the cars that shared a singularity of focus. The supercars were predominantly wedge-shaped, the GTs had the signature rear kickup and kamm tail, while the family cars had low belt lines to maximise visibility and space.

It's often said the best cars of the '80s were designed in the '70s, and a quick look at the cars of this decade shows how true that is. Most show more than a passing resemblance to a Gandini design! After he left Bertone in 1979, he spent some time as an exclusive design consultant for Renault, having sketched the Renault 5 Turbo with its pumped up rear bodywork, and the second-gen Renault Supercinque. 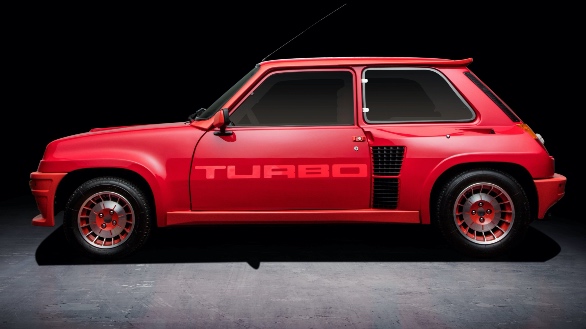 From a front-engined hatch to a mid-engined hot hatch with double the power, the R5 Turbo grew to be a most formidable rally machine, while the Supercinque continued its rise in popularity. Another project for Citroen resurrected an old concept, the Volvo Tundra, and while the Swedes had found the design too quirky, it was right up the French company's alley. As far as quirky goes, nothing gets more wild than a car thought up by ex-Lamborghini engineers, with essentially two Lambo V8s powering it. 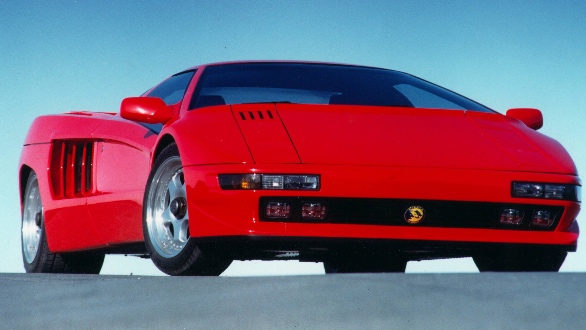 The Cizeta V16T could be called the original Diablo, considering Gandini used the Diablo's final sketches for it when the new owners of Lamborghini, Chrysler, rejected them as being too extreme. The Cizeta wasn't to be though, and only 20 cars were ever made.

The Lamborghini Diablo was the first Lamborghini under new ownership, and though a Gandini design, its lines were softened by designers in Detroit, aiming for more mass market appeal. It seemed to have worked, with the Diablo becoming one of Lamborghini's most sold cars, at just under 3,000 units in its decade-long run. 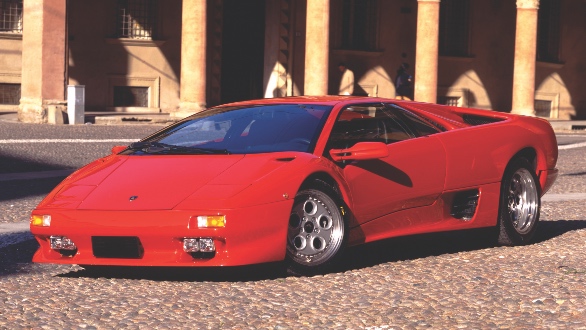 It was a similar story of mixed design origins with another great revival of a historied brand - Bugatti. With the EB110, Gandini supplied the initial sketches, and even created the Bugatti 035 prototype, but the car was completed by Giampaolo Benedini, the architect of Bugatti's factory. Even if Gandini's designs were being softened up, he still had sway with manufacturers. The Maserati Quattroporte IV is a great example, carrying signature Gandini elements, like the asymmetrical wheel arches. 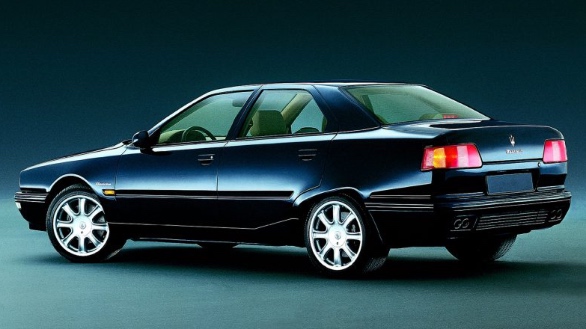 Gandini went on to design a variety of vehicles, not including his foray into two-wheeler and helicopters. Some, like the Stola S81 in the early 2000s with its Stratos-inspired conical windscreen, were more a throwback to some of his iconic designs. But the passing of the torch is always tough. The good news is that sharp designs are coming back into favour now, and modern reincarnations like the MAT Stratos, mean that a whole new generation of petrolheads can wonder at the wedge shapes and angular designs, and hopefully, look them up and find the world of cars that Gandini has designed and influenced. The world can never have too many straight lines. 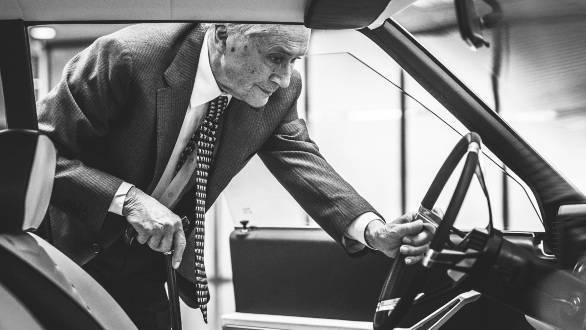 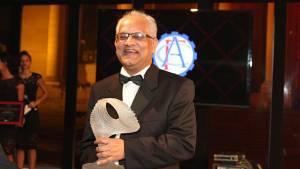 'Marcello Gandini: Maestro of Design' by... 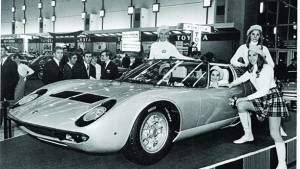 Decoding the Lamborghini Miura on its 50th...
Advertisement