The distance from Delhi to Bombay by road was about 1,450km and it was a 'timed section' on the 1977 London to Sydney Marathon - the world's longest ever car rally ever, covering 30,000 kilometres, 3 continents, and 30 check points in 30 days. Yes, the participants had to cover about 1,000km every day, for an entire month. Both Delhi and Bombay had check points and the Polish rallying ace Sobieslaw Zasada, in a red Porsche 911 Carrerra, took less than 12 hours to get from the check point in Delhi to the one in Bombay! 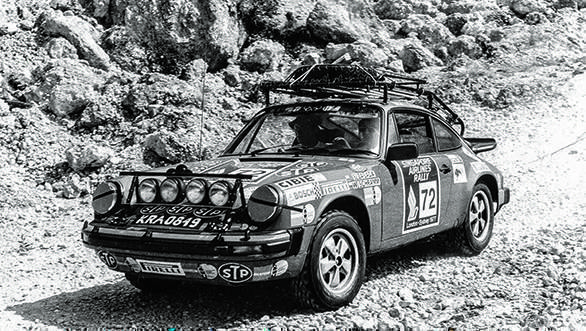 Zasada drove Delhi to Bombay in less than 12 hours

Some 43 years later, the 90-year-old Zasada still recalls that drive vividly and speaking to Grzegorz Chmielewski (with translation by Aleksandra Kasztelewicz) on behalf of this writer he said, "We went over the famous Khyber Pass into Pakistan, to Rawalpindi and Lahore. From there we entered India at the Wagah Border and drove to Delhi via Jalandhar, on the Grand Trunk Road, one of Asia's oldest roads. I was leading the rally and was the first into Delhi on the evening of the 25th of August, 1977. We drove to a crowded square (most likely India Gate) with tightly packed people, where Dunlop had placed us in front of a long building. Crowds of fans pressed on to our car, it got threatening, and the police began to intervene, with bamboo sticks, they chased away the most excited of spectators. 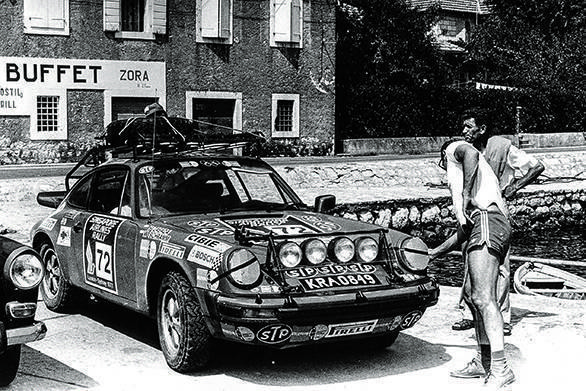 Zasada checking his Porsche 911 in Yugoslavia

These people did not have any bad intentions, but in their excitement, they created a situation of order and security." Zasada continues, "We spent a few hours in the hotel, the Taj I think, and on 26th August, early in the morning at 1:35am, set off on the competitive section to Bombay via Jaipur, Udaipur, Godhra and Baroda. The asphalt road was narrow, bumpy, wavy, and alongside it, again millions of people. We were to arrive in Bombay on 26th August, at 6:00pm, but we were there much earlier. There was heavy traffic in the streets of Bombay, but the rally cars took priority, and the police helped us a lot and did a great job. We made up 4 hours and 30 minutes on this segment. But the time control had not been set-up and the marshals were not there to note my arrival time!" 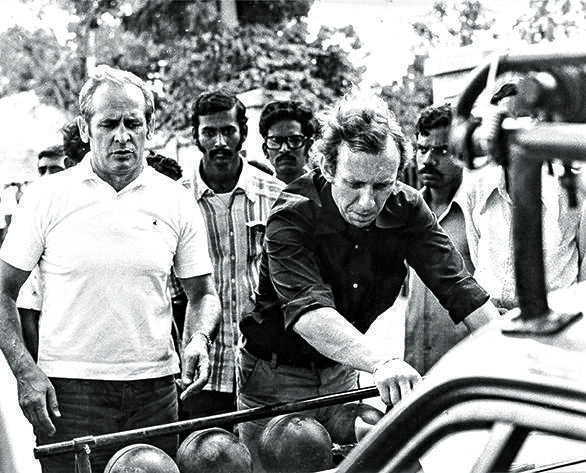 Though this sounds incredible and almost unbelievable, the Polish rallying legend covered the 1,450- odd kilometres from Delhi to Bombay in less than 12 hours! The first car to be flagged off from Delhi, which was that of Zasada, was expected to reach Nariman Point (or Back Bay Reclamation) around 6:00pm. Zasada was so fast, that he was there by 1:30pm. His overall average speed was close to 120kmph throughout, which means that on certain stretches Zasada's Porsche 911 must have been flying along at around 180-200kmph. When asked about this, Zasada impishly said, "But the top speed of the Porsche was about 230kmph, what is the point if I did not use that?". The ace driver also added, "I wanted to extend my lead and also use the additional time to service my Porsche. I did succeed in increasing my lead of course, but sadly, I was unable to get much work done on my car because the set of spare parts had not arrived in Bombay! We needed to replace the shock absorbers, but had to limit ourselves to replacing just the tyres." 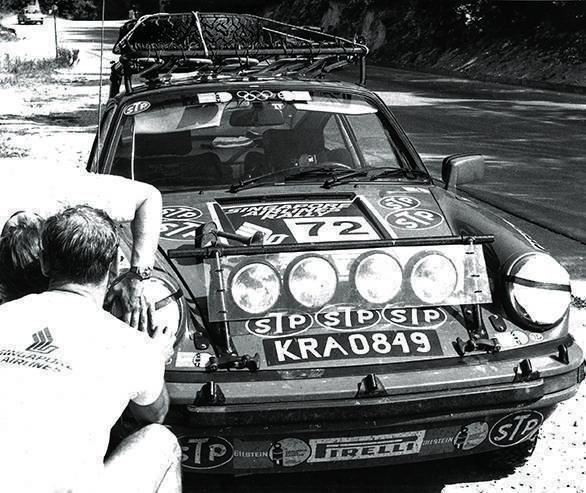 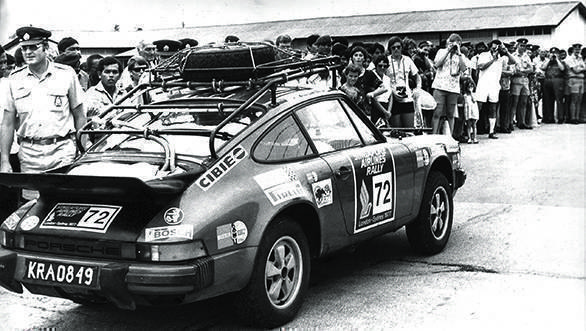 Compared to those competing in sedans, Zasada's Porsche had limited space to carry spares

So all these years later, what else does Polish rallying ace Sobieslaw Zasada remember about his "Passage Through India." Zasada recalls, "Apart from the large crowds who lined almost the entire route, even at night, I remember being showered with flower petals at the starting points, the chapatti bread or naan, as well as a sort of baked pie, made with potatoes, peas and flour (must be an aloo parantha). The other thing I remember is the striking contrast between the poor and the wealthy. I had heard from the then Polish Ambassador Romuald Spasowski about this too. 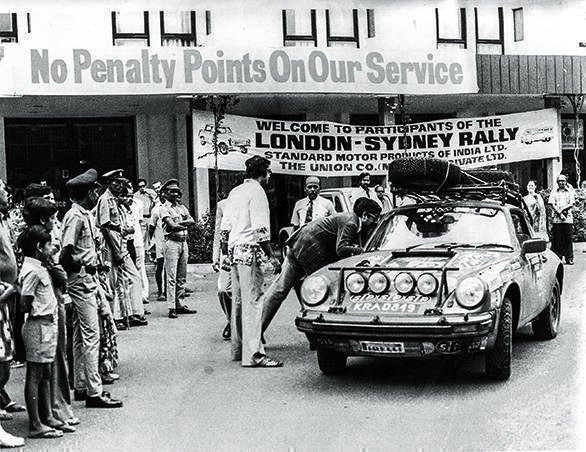 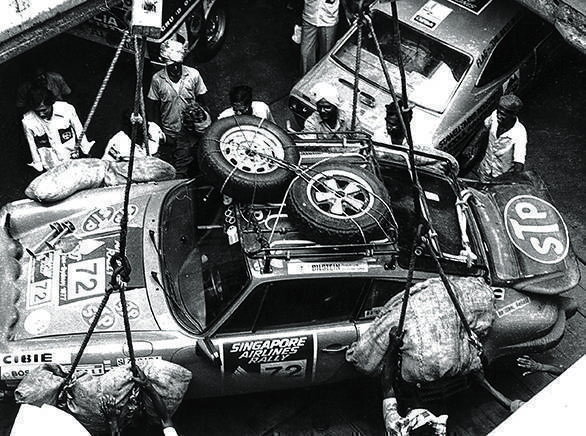 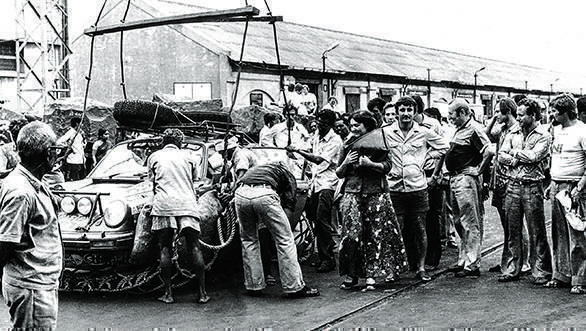 Zasada's Porsche being readied at Madras Port to be lifted onto the ship. His wife Ewa who travelled to India can also be seen standing in the center 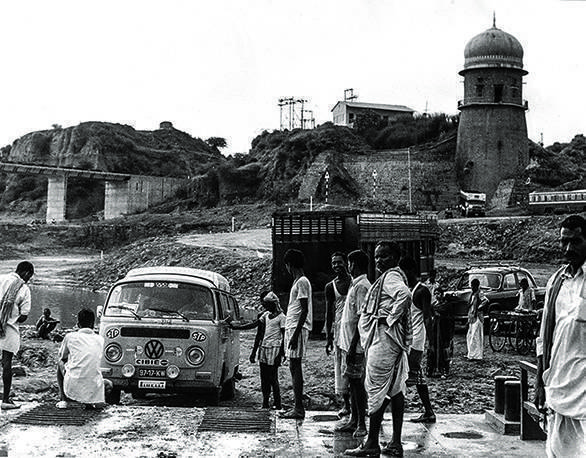 We saw lots of beggars and at the same time came across very rich neighbourhoods with smart residences and people in all sorts of different dress, both traditional and western. In a few words, there were huge contrasts I saw in India. Also, when I was in India, the country had some 400 million inhabitants. Today, Indians are over three times more!"
After Bombay, the event curled south and east to Pune and Bangalore and then to Madras, from where the cars were shipped to Penang, in Malaysia. Until then Zasada was leading, but an accident and damage to the rear suspension in Australia caused considerable loss of time. After leading the event most of the way, the Polish rally star was eventually 13th overall. Once again, the slower, but steadier Andrew Cowan (known as the marathon man) won the London-Sydney, in a Mercedes 280E, ahead of Tony Fowke's Mercedes 280E. The legendary Paddy Hopkirk in a Citroen CX2400 was third. 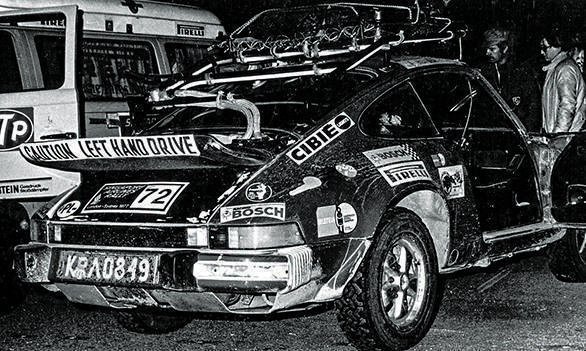 The rear-engined Porsche had a lot of underbody protection. 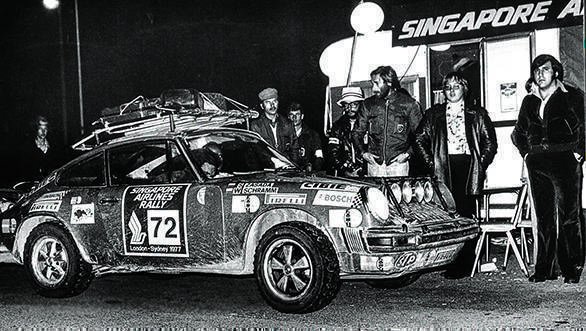 Zasada at a time control

Celebrating his 90th birthday on January 27, 2020, Sobieslaw Zasada is still very active and remains a legend and a hero in his country, Poland. Not surprising, as Zasada was the European Rally Champion in 1966, 1967, 1971 and was runner-up in the Championship in1968, 1969, and 1972. This was at a point of time when the World Rally Championship for drivers had yet to begin (1979 was the first year when the Swedish driver Björn Waldegård  won the inaugural World Rally Championship for Drivers). So, before this, the European Champion was de facto also the World Champion. 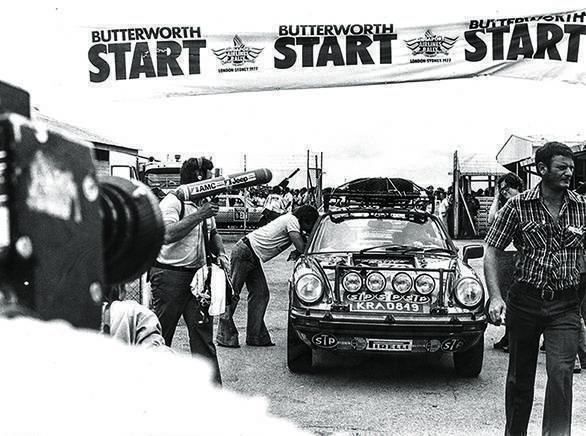 Zasada at the flag-off in Malaysia

Sobieslaw Zasada went on to win 148 rallies in his career. Zasada's first wins were in a tiny Austrian Steyr-Puch 650, with which he won his first European Championship in 1966. The Steyr-Puch 650 remains the smallest engine car to win the European Championship ever. Seeing his talent, Zasada got drives from Porsche and, later, BMW. At the end of his career, he switched to Mercedes-Benz. 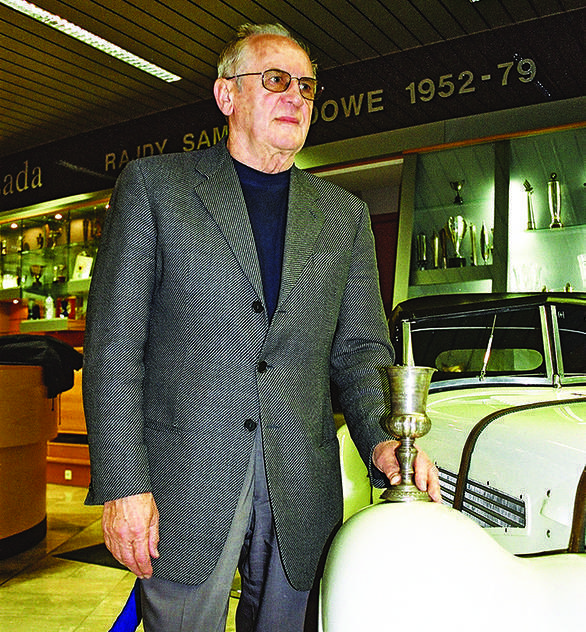 Zasada the ace is still quite active at 90

Zasada did most of his rallying in the 1960s and the 1970s, before the fall of the Berlin Wall. Back then, things were very different in Poland, which was behind the Iron Curtain. There were serious travel restrictions with individual passports being locked-up in passport offices. Every time Zasada had to travel he needed to apply for permission and getting visas was also very difficult. It was because of all these restrictions and difficulties that Zasada could not fulfill his plan of doing a recce of the route before the 1977 London to Sydney event. This makes his 12 hour drive from Delhi to Bombay, that much more extraordinary. There is no doubting the fact that despite the restrictions, the red tape, and else, Sobieslaw Zasada managed to overcome all hurdles, and became one of the greatest rally drivers of all time, one who, though, remains largely unknown and unsung, for the rest of the world. 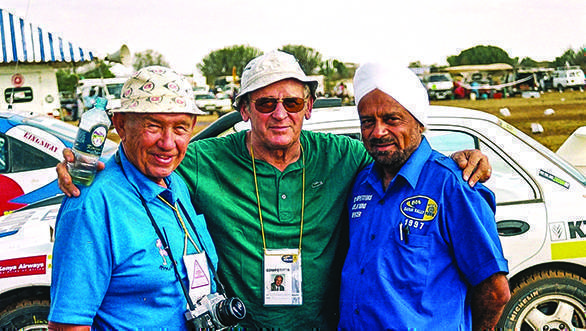 Zasada with his friend the late Joginder Singh, the Kenyan of Indian descent, who won the legendary Safari Rallly thrice

How the London to Sydney changed my life

About The London to Sydney 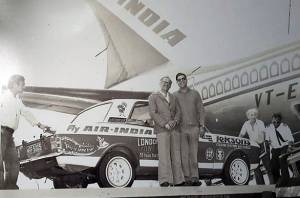 Dr. Bomsi Wadia: The only Indian to have...
Advertisement