Every once in a while a racer will say something to you that truly stands out. Sometimes it's an honest admission, sometimes it's a candid declaration that throws caution to the wind, and sometimes it's a statement of universal truth. Then there are those rare occasions, times when the words they utter stand out in significance because they are a combination of all three. And so it was with something CS Santosh once said to me.

It was a few months ago that I asked Santosh why it was that he did what he did. His answer, though brief, was pertinent and profound all at once. "It's like this," he said. "On an off-road motorcycle, you have to go out there and make your own way - sort of like life itself." He spoke of how there were uncertainties, there was no way of knowing what lay over that sand dune, around that bend or beyond that tree stump you could see in the distance. Just like you could never tell what life had in store for you. And it was this thought that thrilled him the most about the sport and made him not only want to compete in it, but also excel at it. The struggle that the sport entailed, whether it was on the motorcycle or off it, was to him representative of life itself. And so, despite the many broken bones, the third degree burns, and the struggle for sponsorship, he strove on. The jumps got bigger, the falls harder, the injuries worse. But his eyes stayed firmly focussed on the prize - the Dakar Rally.

We're sitting in a restaurant in Mumbai where Santosh is set to make his big announcement. He's holding a can of Red Bull in his hand, wielding a microphone, and conducting his own press conference. "I'm very pleased to announce that I am set to become the first Indian to compete in the legendary Dakar Rally," he declares to an audience who don't really seem to appreciate the full significance of his words. Perhaps it's because he makes it sound so easy. But for Santosh, the journey to the Dakar has been anything but. When, on January 4, 2015 he rides out of Buenos Aires astride a KTM 450 Rally that he will pilot for Kini Red Bull, it will be the culmination of years of hard work and a rather long and arduous journey that began on, believe it or not, a bicycle.

Back in the day, before he had an engine to power his two-wheeled exploits, Santosh remembers how he'd push his bicycle to the very limit. He'd always want to take that corner a little faster, ensure he graduated from a four-foot jump to a five-foot jump, and just keep pushing the limits - the bicycle's and his own. When he got a motorcycle to make the commute to Bangalore's St Joseph College a little easier, his off-road exploits got even more extreme. He'd spend days riding around dry lake beds, hunting for trails in the woods - anything that could help him master the motorcycle off-road. And the first time he witnessed a Supercross event and saw rider Vijay Kumar win it Santosh knew that that was what he wanted to do with his own career. A hard fought battle for a spot with TVS Racing followed, with years competing in the National Dirt Track Championship and a few outings in the Asian Supercross championship. He won races and titles along the way, and then looked beyond that.

"I was constantly being told that you weren't a true rider if you hadn't done the Raid de Himalaya," Santosh says. And so, in 2012 he decided to get on a bike and tackle the most awe-inspiring rally that we have in the country. "I'll never forget the very first stage of the Raid. They flagged us off and I took a right-hander, looked to my left and saw the steepest drop I had ever seen. It was at least 2km steep and that's when the magnitude of the Raid struck me." How did he do there though? Oh he won the event in his very first attempt, a feat that has never been achieved before or since. Deciding to do the World Cross Country Rally Championship was the next logical step for him. After all, he'd tackled dirt trails, he'd tackled the mountains, the treacherous desert sands needed to be tamed too.

Perhaps it was the first round of the 2013 World Cross Country Rally Championship at Abu Dhabi that gave Santosh something of a reality check. It was life's way of saying that he'd better be prepared for whatever it was he was about to try his hand at. And it was easily the biggest test of his strength and resilience - both as a rider and as an individual. By his own admission he went into the first round with no testing, astride a factory supported KTM. Things weren't looking too bad for him though. He was slowly learning the fine art of navigating in the disorienting desert sands, learning how to read the condition of the soil, and slowly gaining a holistic understanding of the sport that is cross-country riding. And then, just when things were looking good, fate bared its ugly fangs. Santosh crashed - easily the worst crash of his career. The fuel tank on his motorcycle exploded, he was engulfed in flames, and suffered third degree burns. It put him out of contention for the rest of the season, and took months to recuperate. And instead of the love for the sport diminishing and fear taking over, it just made his desire to continue in it stronger.

Articulate chap that he is, Santosh tries to explain to me exactly why his determination to continue in cross country rallying is so strong. "There's just so much uncertainty in cross country rallying. You're in that moment when you're just responding to that motorcycle. There's nothing else out there except for you and the bike and it's beautiful," he says. Which is why he continued through the 2014 season with renewed vim and vigour, winning the 2014 Desert Storm on his first attempt, before a 10th place finish at Abu Dhabi and eighth in Qatar. The true challenge ended up being the Morocco edition of the WCCRC. A precursor to the Dakar, the Morocco Rally is tough not only in terms of terrain and distances, but also in terms of the sheer navigational challenge it throws the way of the riders. Santosh felt the full effects of the five month break between Qatar and Morocco and wasn't able to finish higher than 22nd, although this put him ninth overall in the championship standings.

Santosh patiently explained that it wasn't over till it was over. Not till the money for his factory supported KTM ride had made it to the team in question. Doing the Dakar costs money. A whole lot of money. Rob-a-bank money. Fortunately for CS Santosh, the Pune-based PB Racing Group stepped in. Owned by builder Punit Balan, the group is responsible for the Pune Invitational Supercross event, and is currently helping other Indian off-road riders too. They coughed up the 100,000 (approximately Rs 78 lakh) that was needed for Santosh to be a part of the Dakar this year. And they're also sponsoring him in the 2015 season of the World Cross Country Rally Championship and the 2016 edition of the Dakar too! [UPDATED: Santosh in fact made it to the Dakar on his own steam, without support from PB Racing, and some amount of support coming in from Red Bull].

But the uncertainty leading up the Dakar, the whole "Will I make it there or not," means that valuable time that Santosh could have spent training for the event has gone to waste. While he'd initially planned on heading to Spain to train with Dakar legend Ruben Faria, he was short of time. But not of optimism. "Even though I didn't get to train with Ruben, my Kini Red Bull mechanic, Melot Benjamin, is also Ruben Faria's mechanic and he's immensely experienced, which is a huge plus point."

Of course, while I'm writing all this out, Santosh is exactly nine days away from catching his flight to South America, getting astride his motorcycle and riding off largely into the unknown. There's not much that he can do save for spending the rest of these nine days riding around non-stop. And, like it's happened so often before in Santosh's career, he doesn't really have an idea of what awaits him on the other side, but the goal is to just finish the Dakar. "The plan for this year's Dakar is to learn as I go along," he says. He plans on spending the first few days of the rally just getting back in the groove of navigating and riding, and also getting used to the motorcycle. And then he hopes that his timings will get better and, more than anything else, that he will achieve his goal - to complete the most treacherous off-road rally raid in the world. The rest will follow. 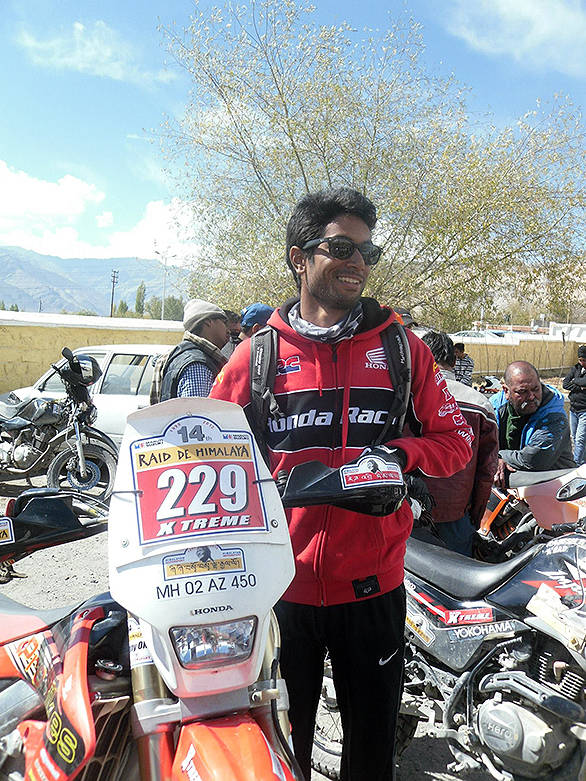 Somehow one get's the sense that Santosh will be okay after all. It's been something of a trend for him to just end up in situations of great uncertainty and come out of them just fine. A little story that he told me once comes to mind. Back when he was still racing for TVS, the company had once flown down an Australian rider to train them. Santosh and the rider struck up some sort of friendship, and the rider once casually said to him "If you ever find yourself in Australia give me a call and we can train together." So one day, deciding that he needed all the help he could get in terms of riding technique, Santosh just caught a flight to Australia and made a phone call to the rider in question to let him know he was there. As it turned out, the rider had downed a few and had trouble recollecting who Santosh was. But he sent a friend along to pick him up from the airport in any case. It was a further two days before he collected the hapless Santosh from his friend's house and eventually put him onto Australian Supercross Champion Daniel McCoy. Santosh picked up a good bit of his riding skills from training with McCoy, and, as it would turn out, catching that flight and going across the seven seas was probably one of the best things that could ever have happened to him.

And so, as Santosh packs his rather smart Red Bull-liveried riding gear and catches that flight that will take him once again into the unknown - unfamiliar motorcycle, uncharted terrain, unheard of trails and trials alike - we wish him the very best. Now go on - finish the dreaded Dakar, will you.