Flashy film stars, uber rich businesspersons or even that pompous cricketer. That's the kind of people who come to mind when you think of a convertible in India. Driving a car without a roof in India is a luxury that only the crème de la crème can afford.

It is then an irony when you think that the earliest cars in the world were all convertibles. It was all about affordability then. Fewer materials meant less cost. But then mass production of cars began and adding a roof became more affordable. Convertibles disappeared only to make a comeback as a status symbol, luxury machines that were beyond the common man. 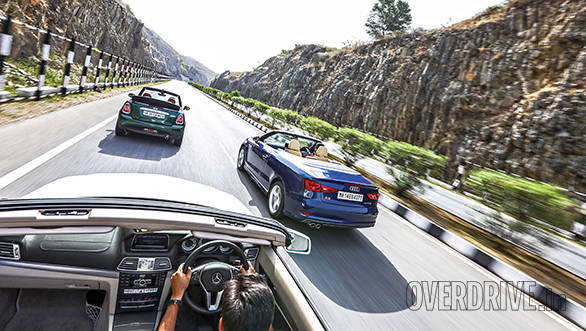 However, in Europe, little roadsters with soft convertible tops started to emerge that were primarily built just for fun. But here in India it still is not a common sight and in a country where it's sunny most of the year, that's a pity. Most open-top cars are priced above the average luxury car while many cars just aren't sold here. This is the reason we don't get to choose a lot of affordable convertibles like the rest of the world. However, times are changing and there are quite a few cars that have and are headed our way.

With summer upon us we decided that the best way to celebrate this season was to get into the roof-down mode and feel the wind in our hair. Goosebumps anyone? We picked three cars that you can drive with the top down and headed to the picturesque state of Rajasthan to meet someone special. 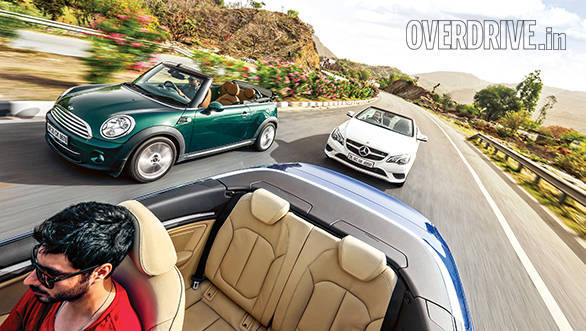 Let's introduce the beauties. We have the Audi A3 and the Mercedes-Benz E 400 cabriolets, the two new entrants to the scene and the third is the Mini Cooper Roadster  the smallest of the lot. While the A3 and the E are sedan-based, the Mini is essentially a hatchback without a fixed roof. All the cars are appealing but are quite different from each other. While the E Cabriolet has been around for a few years now, the updated model receives a new face and slightly reworked rear to go with the new Mercedes design theme. The headlamps feature LED lighting and is an all-new design when compared to the updated E sedan. Overall styling is sporty and mature at the same time. It may be based on the older C-Class but it is quite a long car and that clearly shows when viewed from the side. The A3, meanwhile, looks identical when viewed from the front to its sedan sibling but this also means it's a smart looker. Move to the side and the clean lines continue to flow but because it's a two-door, the overall length has been reduced to give the car a more proportionate look. The Mini has been around for the longest time but still manages to attract the most attention despite not receiving any changes since launch. The Mini Roadster shares a lot of its design with the previous generation hatchback (the next generation Roadster is still some time away). It's a young, cheerful looking car that stands out from the rest. 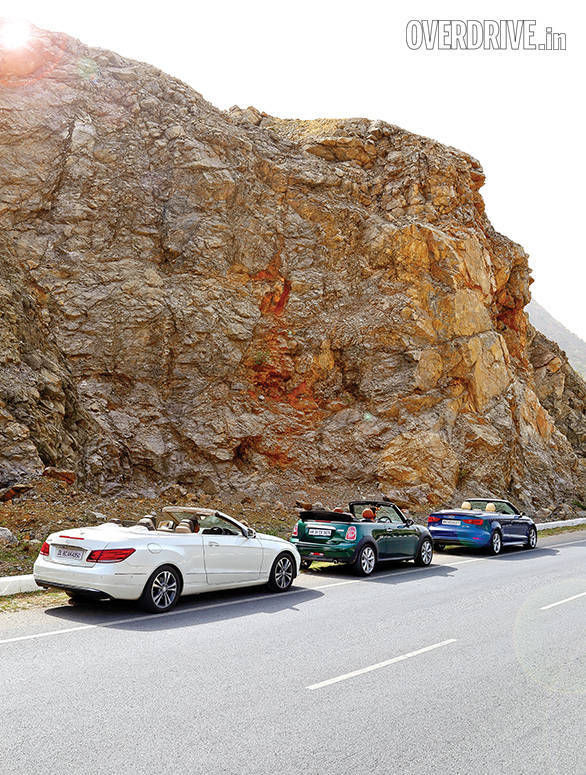 The story inside continues in the same vein. The Mercedes interior is more elegant while the Audi uses a modern yet simple dash. The Mini uses a lot of circular elements, like the huge frisbee-sized speedometer and retro-themed toggle switches. It also gets various colour options for its ambient lights, perfect for the younger audience. In terms of space, the Mercedes offers decent room for the rear passengers while the Audi and the Mini don't do a good job at that. The retractable hood also takes up quite a bit of space in all the cars and hence eats into the boot. The Mini offers 280 litres of boot space making it the least spacious, the Mercedes sits in between (300 litres) and the Audi surprisingly offers 320 litres. The quality of materials used in the E Cabriolet is top notch while the A3 and the Cooper are a close second. That said, the E interior is beginning to feel dated especially when compared to newer generation Mercs. 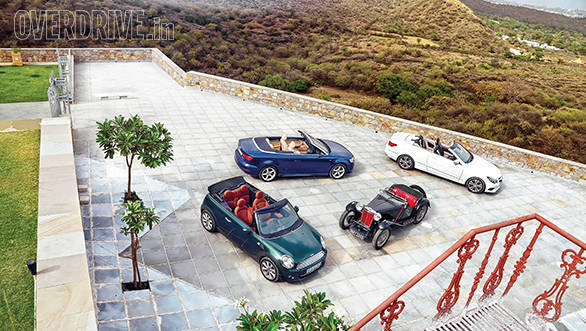 All the cars had a soft top and that was temptation enough to drive with the top down on the way to Udaipur. The purists would have done so all the way but being in a convertible in urban India is inviting too much trouble from passing traffic. On the country roads and on open highways, it's a no brainer. Besides the weather was perfect, it was sunny but still a cool day as there were grey clouds blocking out the sun. Our destination was the Fateh Garh, a heritage palace located on a hill overlooking the city of Udaipur. Apart from being one of the most beautiful places that the world has to offer, Fateh Garh is where we were to meet that someone special. The palace is owned by the Kelwa family, who also happen to be collectors of classic cars including a few convertibles. Hint. Hint. 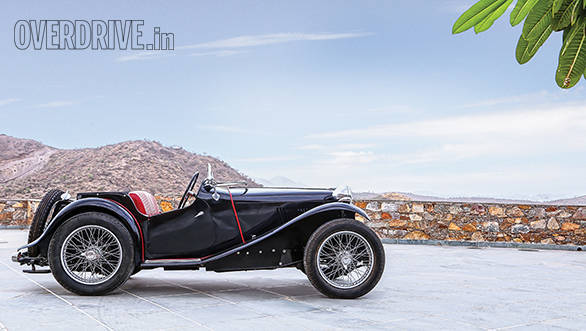 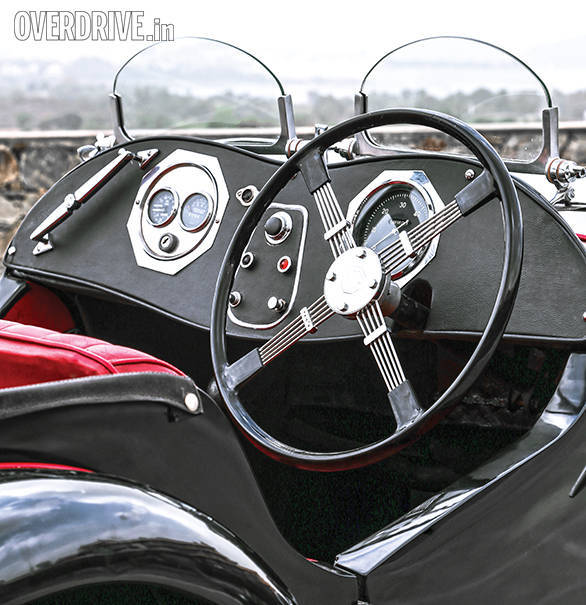 After a long but fun drive, we reached Udaipur before sunset. We drove around the pristine Pichola Lake and then headed to the palace to gorge on authentic Rajasthani cuisine and also to get some well-deserved shut-eye. The next morning, Dushyant Singh Rathore of the Kelwa family showed us around their car collection and there stood our special someone - the MG PA Midget. A roadster built in the early 1930s that the family has owned for the last 15 years. Parked next to the modern convertibles, the MG is literally a midget, even compared to the small in footprint Mini. It was essentially an affordable and fun to drive roadster. The PA took us back in time. This car has been featured in various classic Bollywood songs because of its very niche body style. The MG PA model was produced from March 1934 until late summer of 1935. At that time, 1,973 cars were built of which only a few hundreds remain to this day. Not many made it to India so there are only a few examples left in the country. It's a beautiful little baby. The car features compact, separated windshields that aren't just elegant but also functional. The four-spoke steering wheel is a work of art. In fact, Varun wanted to get one to put up in his room back home. Despite its compact size, the car features an elegant bonnet. That long nose design which makes it look oh-so royal. The spare wheel sits at the back of the car, adding to the yesteryear effect - we don't see that in today's convertibles. 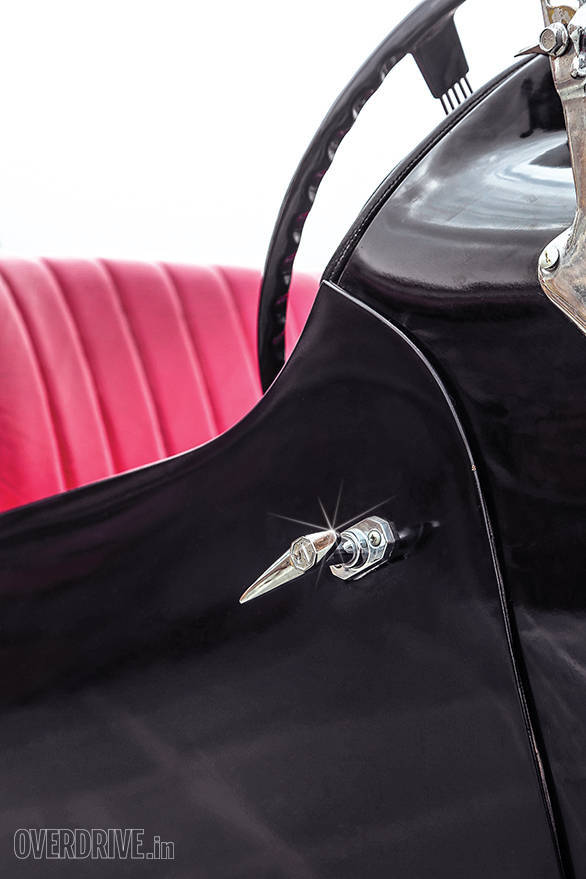 The Midget, in keeping with its name, also features a tiny motor - the 847cc long-stroke unit that produces 36.5PS and claims to attain a maximum speed of 119kmph. Today, even the average small car puts out more power than that. The E 400 V6 produces almost ten times as much! But then one can't compare the classics to their modern counterparts. Can you compare Timothy Dalton to Daniel Craig? Exactly what I was thinking! 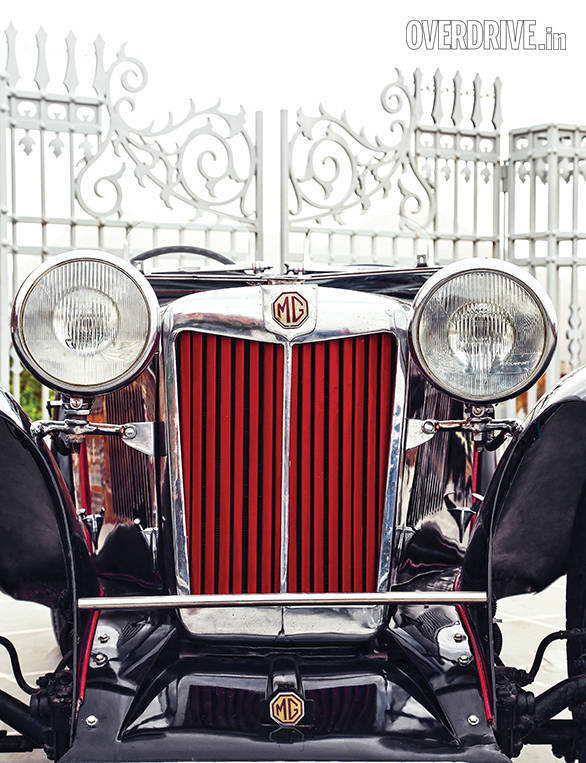 As I was admiring the Midget, it made me think of the time-machine like travel that cars have been through. And through connoisseurs like Dushyant, we are able to experience the beauty of yesteryears that would have been otherwise lost to generations like ours. 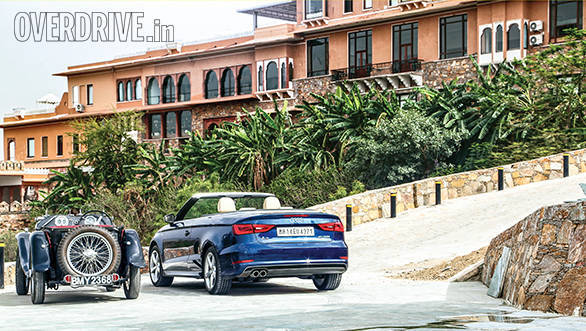 I was standing there straddling two worlds. The earlier one where everything was direct. Some still prefer that raw experience where you felt everything that the car had to offer and pushing the car to the limits was what formed the bond between man and machine. And there's the majority that wants all the cushioning that modern day electronics have to offer. Similarly, the convertibles that are on offer today are vastly different from what they were before. Nowadays, an automatic roof that opens at the touch of a button is nothing like the manual method employed for the old school. 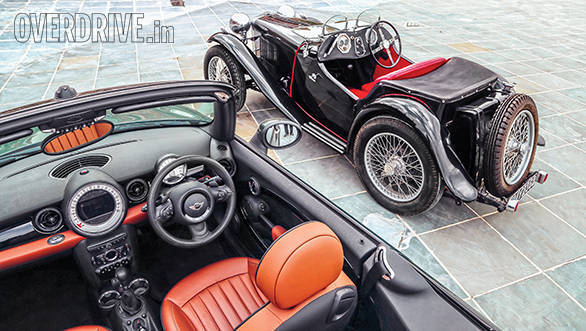 But it all comes down to one thing that's common between all convertibles  driving with the roof open brings you that much closer to the real motoring experience. You feel exposed to the elements and that makes you feel one with the automobile and no one can deny that. Summers could be a lot more fun if open-top cars became more accessible and affordable in India. While the A3 Cabriolet and the Mini Roadster are priced lower than the E 400 Cabriolet, the cars could be even easier on the pocket if they are assembled here. And that would mean that more and more people could enjoy the awesomeness of a convertible and feel like that superstar, if you may. And to make matters more interesting the powers that be, should think of making a modern Midget. We need more cars like that too. 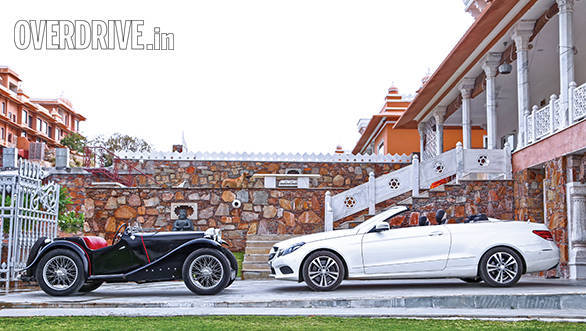