It was a typical day at the tram station. Rainer Schmidt hurried across the platform, out the building and into the open air. He glanced at the overcast sky and felt tiny drops of rain fall on his face and muttered softly under his breath. He needed to buy a car he thought to himself for the umpteenth time. Nothing too big, he'd decided. Just something with enough room for himself and his valise, making the daily commute from his law office at Lennestraße to the high court at Elßholzstraße a little easier and perhaps a little quicker. Herr Schmidt, with all the precision that is expected of people hailing from Stuttgart, hated being late. 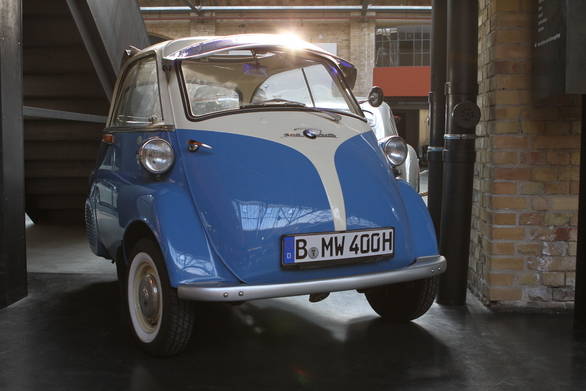 It was two weeks later while striding through the tram station once again that an advertisement caught his attention. There was a tiny blue car on the poster. Small, with room enough for one. Just the sort of car he'd been looking for. His mind was made up. A week later, it was a rather pleased Herr Schmidt who could be seen motoring around Berlin in a bright blue BMW Isetta. His coworkers had laughed at him, saying that the car was meant for young women, and not suited to a lawyer - one with a touch of silver appearing at his temples that too - of his repute. It didn't bother him one bit. The car was exactly what he needed and it served him well for years. And decades later when one night Schmidt took to bed after a glass of Slyrs sherry, it was in a dreamlike state in his beloved Isetta that he made that final journey to the pearly gates to meet St Peter. The Isetta parked in the garage remained there for a long while until one morning Herr Schmidt's nephew, on a whim, sold it to a classic car collector. A year later that very Isetta stood gleaming in the Classic Remise, a classic and vintage automotive collective in Berlin, built on the same location that once housed the tram station that the lawyer used to frequent. The very space in which Herr Schmidt had caught his very first glimpse of a BMW Isetta. 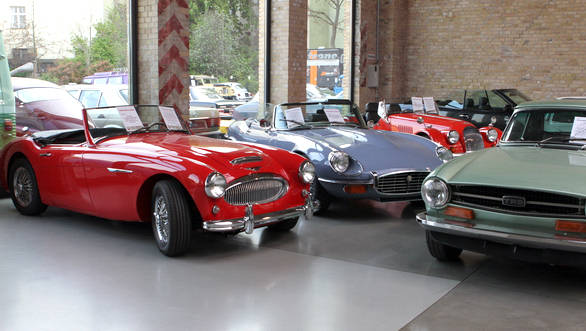 I realise that I have been dreaming. I have spent the last several minutes rooted to the spot at the Classic Remise in Berlin, conjuring up a fictional history of the car that I'm looking at - a gleaming blue and white example of the BMW Isetta 300. There are multiple thoughts that come to mind all at once. For one, I'm thinking of how the Isetta 300, especially in this particular colour, looks rather like a scaled up version of the BMW roundel itself. 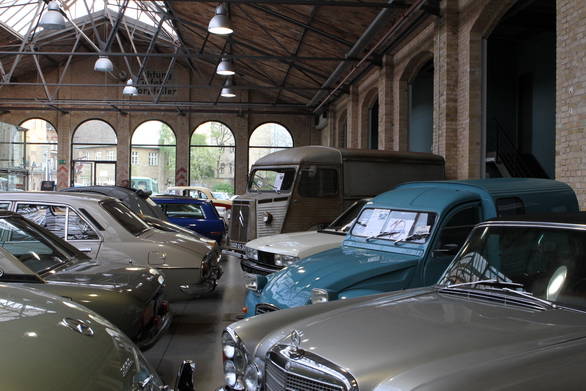 At the same time I'm also fascinated by how just the sight of a car can result in a flight of fancy, transporting one from the present to the past in the matter of a glance. And it isn't just this particular car that does it. In fact it is every single one of those machines housed in the Classic Remise (formerly called the Meilenwerk - which once housed old trains and coaches) that has this ability. 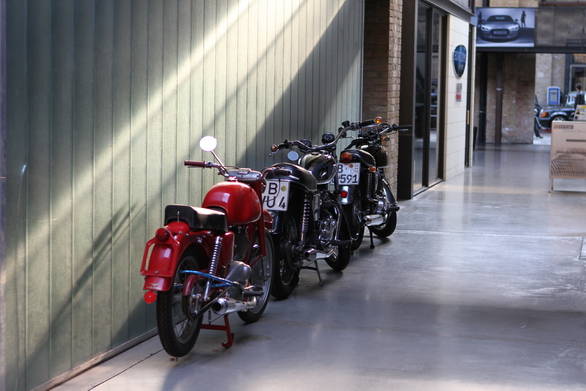 There aren't as many motorcycles at the Remise, and more often than not they are tucked away in corners - like this red Moto Guzzi Lodola 235

Each car or motorcycle that you see here is unique, belonging to a different period of time, with its own individual history. No wonder then that this former tram depot is a right royal treat for the vintage and classic automobile lover. It is just the sort of place that causes the automobile enthusiast to quiver with delight, eyes threatening to pop right out of their skull, and calls for the immediate services of a very large drool bib. Much like the reaction that the sight of Lindsay Lohan's Beverly Hills mansion would provoke in a cocaine addict, then. 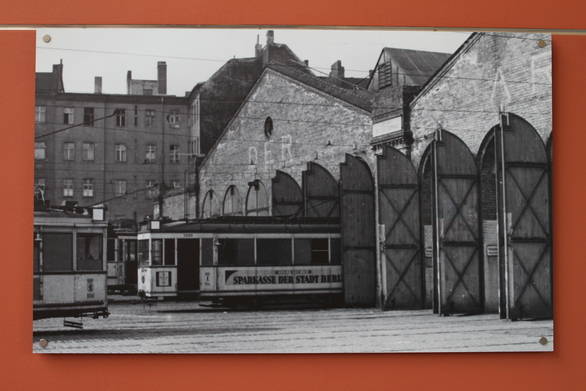 That's what the Classic Remise used to look like back in the day, before it became an automobile collective

Now, it isn't just the fact that the Classic Remise (formerly called the Meilenwerk museum) is housed in what once used to be a historic tram depot in Berlin that makes it unique. There's so much more to this museum than just that. In fact, it's more a classic automobile showroom, than anything else. If you have a vintage or classic automobile that you would like to sell, you can take it to the Remise and have it housed there for a fee, with a plaque that displays the asking price for the machine and a little bit of history to go with it. And, should someone born with a silver spoon (or three) in their mouth saunter into the space, and take a fancy to your machine, there's a good chance you'll be able to find your buyer then and there. What is terrific, though, is that for the automobile enthusiast, looking at the cars on display is absolutely free of cost. There's no entry fee for the Classic Remise, and you can walk right into the place between 8am and 8pm between Monday and Saturday, and 10am and 8pm on Sundays, and take in as much of the classic metal as your eyes can see, or your cellphone's memory card can store. 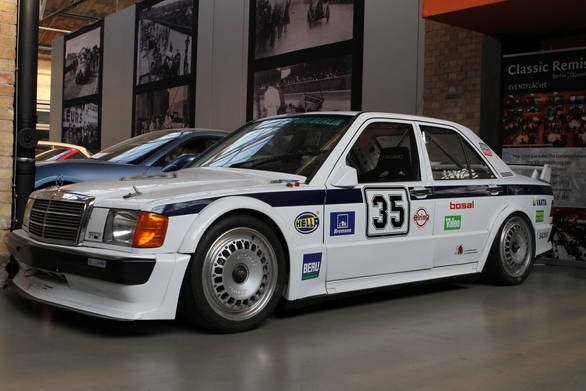 There's more, though. For private owners who want to store their vehicles in concours condition, the Classic Remise allows them to do that too. There are 88 glass boxes available where you can have your classic car tucked away to rest, free from the vagaries of dust, weather, the atmosphere, and errant hands so eager to lay a greasy print or two on freshly waxed bodywork. Walking through row after row of these glass cases, I caught sight of a Lamborghini Diablo sitting next to a Ferrari Dino. Sant'Agata separated from Maranello by a thin sheet of glass. El Diablo next to Sleeping Beauty in a glass coffin - it's like something out of Dante's Divine Comedy. Poetic, really. 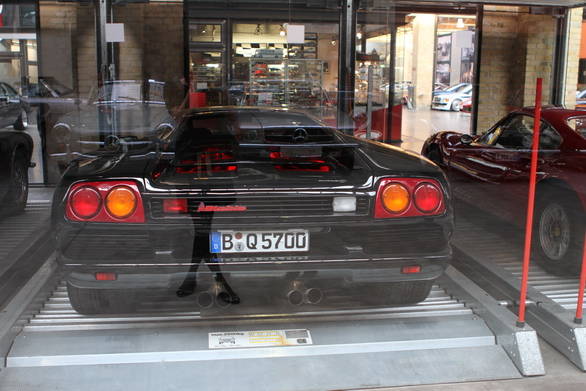 What sets the Remise apart from other classic museums and dealerships is that while the automobiles line the display area, they are surrounded on all sides by car and motorcycle workshops of every sort. Some specialise in restoration of specifically Mercedes-Benz SLs, others are dedicated to Porsches - every year, make, model; still more are dedicated to completely refurbishing and restoring any classic automobile you might be able to bring them. 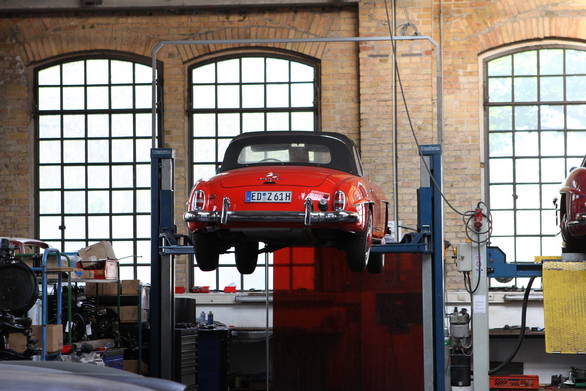 Workshops that restore, refurbish, tune and fettle with classic cars and motorcycles are also housed within the Classic Remise

The good thing is that most of these workshops have glass doors and panels, allowing you to peer right in as the cars and motorcycles are being worked upon. There are also special services available - such as professional waxing and cleaning services, and professional estimators or valuers. In addition, there are also an array of scale model shops and automobile memorabilia stores from where you can have your pick of automotive keepsakes, in the very real case that the actual metal on display is far too pricey for you. 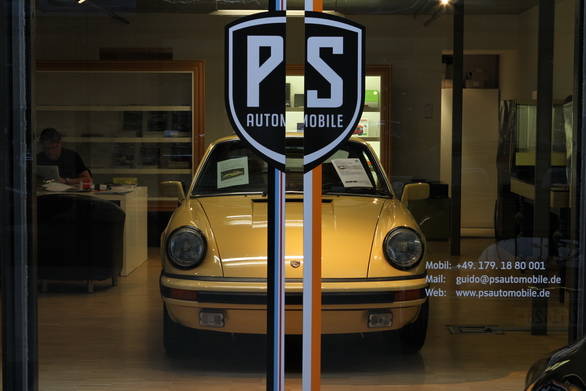 If you do plan on visiting the Classic Remise, we'd recommend you go there with ample time on your hands, and preferably on a weekday, when the workshops will be on in full swing too. So you can catch a glimpse of the highly skilled mechanics and craftsmen hard at work on those machines. Just walking through row after row of machines is something that will cause your heart to beat a little quicker - whether it's that DTM edition Mercedes-Benz 190E, the Martini Racing Porsche 934, or even that grumpy looking Citroen H Van that is tucked away in the corner. There really is something for everyone at the Classic Remise. 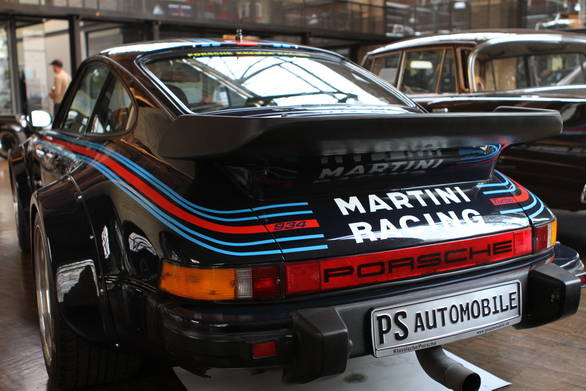 But what stands out for me more than anything else when it comes to this particular automobile museum, is that it is history housed within history. There are tram tracks running through sections of the museum, with classic metal all around it. And having the past entrenched within the past, to ponder over in the present - now that's something very special.

Here is an image gallery of the Classic Remise Berlin 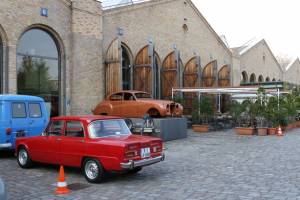