In the run up to their film's release - Bareilly Ki Barfi - Firstpost took Ayushmann Khurrana and Kriti Sanon on a Caraoke drive for some lively conversation and to belt songs from their film while on the road. Khurrana also delivered a few of Sanon's lines from the film with utmost perfection. Even with all happening at once, the two managed to sing blissfully through the smooth ride impervious to the bumps and the swerves.

Bareilly Ki Barfi is essentially based on a seemingly predictable love triangle. However, the film might turn out to be a refreshing, realistic take on modern relationships with the leading actors' skills. The music of the film has been piquing the curiosity of the audiences. Directed by Ashwiny Iyer Tiwari, who also helmed Nil Battey Sannata, Bareilly Ki Barfi releases on 18 August, 2017.

Click here to watch Khurrana and Sanon, as they groove to the songs, amid laughter and a bit of role-play here and there. 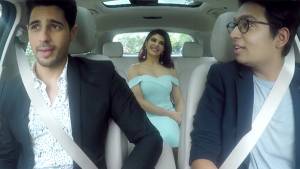