The Indian love affair with fuel efficiency has been as solid and unwavering like the stuff you see between couples in a romantic flick. Our cars and motorcycles are designed and tuned to sip on fuel and the kmpl numbers constantly feature in brochures. Now, Japanese tyre manufacturer, Bridgestone has launched the Ecopia range of tyres that claim better fuel efficiency while reducing environmental pollution too. Wonder how the Ecopia manages to do both? Allow me to explain. 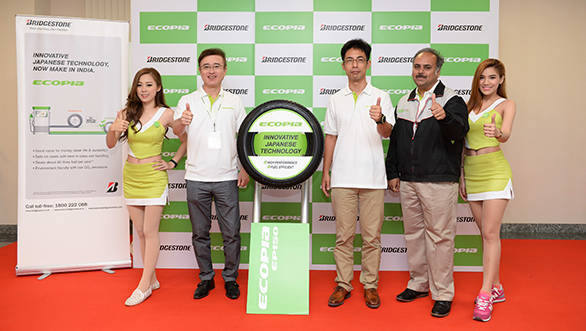 The name Ecopia, in Bridgestone speak, is derived from the words Ecology and Utopia. The company says that it has utilised its numerous years of tyre development experience to create the Ecopia. The Ecopia range in India includes the EP150 and the EP850, the former catering to cars while the latter caters to the SUV segment. 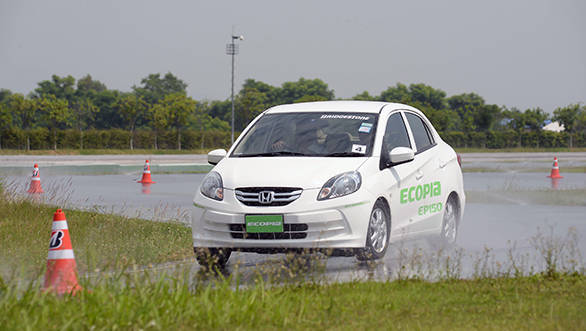 The car on its right was running an unnamed competitor's tyre while the car on its left was riding on the Bridgestone S322 tyre. The cars were driven up to 60kmph, side by side, and after crossing a marker on the track the drivers slotted the cars into neutral. The cars coasted to a stop with only the resistance from the tyres acting as the brakes. The Bridgestone Ecopia offered the least resistance and resultantly coasted the farthest, rolling to a stop 76.9 metres ahead of the car shod with the Bridgestone S322s. The competitor tyre equipped Amaze rolled to stop a 108.8 metres behind the Ecopia equipped Amaze. Another test proved the claim once again. We were asked to sit on tricycles, one shod with the Ecopia while the other had Bridgestone B322s. The tricycles were then rolled off a slope simultaneously and the again the Ecopia tricycle rolled way ahead of the S322s. 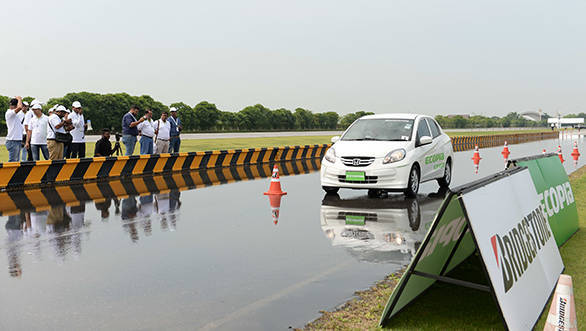 The next bunch of tests were set to prove another forte of the Ecopia-  wet road handling and feedback. Test One was a braking test where the three cars in the rolling resistance test would drive down a wet road at 80kmph and the driver would slam on the brakes after passing the braking marker. The Ecopia equipped Amaze stopped the quickest while the other cars stopped over 4 metres afterwards, thus demonstrating the wet road grip that the Ecopia offers. Bridgestone has created a unique tread pattern that sucks water out and away from the ridges that run in the centre of the tyre, thus increasing road contact and consequently, grip. We got a chance to drive the Ecopia equipped car and the competitor tyre shod car on a wet handling track back to back. The car with the Ecopia offered more confidence on the tight and twisty course and the feedback from the tyres was excellent. I could carry a little more corner speed on the wet track in comparison to the other car and braking hard before the chicane did not unsettle the car with the Ecopias. Quick direction changes were handled with ease and you get a sense that the Ecopias can be pushed around safely.

In my book the confidence that tyres offer is an important aspect of the car as an overall package and the Bridgestone Ecopia EP150 offers that confidence. Of course, this was a near perfect tarmac at the Thai Proving grounds and a real world test would offer better perspective. Time to get these fitted on one of our long termers then! 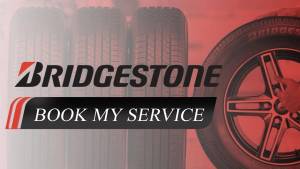 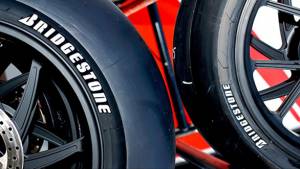 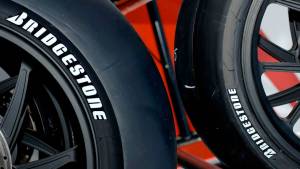 Bridgestone to invest Rs 350 crore in its...
Advertisement