In 1971, when Maurice Hamilton was a young boy, harbouring hopes of being a motorsport photographer, he went to Mallory Park to watch a Formula 2 race. There, he happened to snap a picture of a young, fresh-faced driver in the cockpit of his racecar. At that time, Hamilton had no idea who the driver was. And he had no way of knowing that the driver would eventually win three Formula 1 world championship titles, and become one of the most influential figures in motorsport. Imagine then what it must have felt like 40 years later, when as a well-established and highly respected motorsport journalist, who had known Lauda for decades already, Hamilton was able to dig out that same photograph and show it to Niki himself. That's the story that Niki Lauda: The biography begins with. What follows soon after is a re-telling of Lauda's life from the moment that he burst onto the motorsport scene. 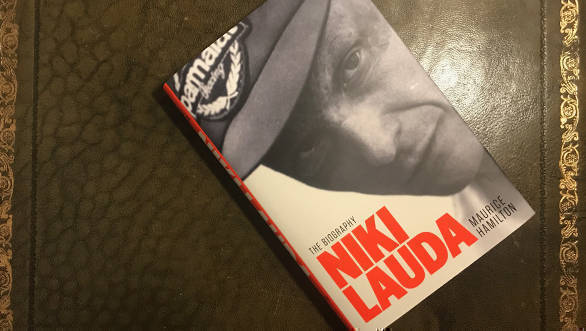 What sets this book apart is that this biography isn't only told through Hamilton's own voice, instead he supplements the story with the voices of people who knew Lauda over the years. In that sense, it becomes something of a tribute, although one grounded in the truth. A biography in which no one seems to mince words. Possibly the sort of book Lauda, famous for calling a spade a bloody shovel, himself might have approved of. Whether it's Max Mosley talking about Lauda's early foray into Formula 2 with March, or whether it's Robin Herd's initial impressions of Lauda, who he couldn't help but compare to Ronnie Peterson, the book takes us through Lauda's motorsport career from the early days. The fact that all these anecdotes come to us in the form of short blocks of unedited interviews makes them very easy to read, and one can't help pacing through the story, wondering where the next interesting tale will come from, and by whom it might be narrated. The most interesting voice all through, though, is Lauda's own. Short interviews from Hamilton's own time speaking to him over the years, find their way into this book, and add so much flavour and character to the story. After all, only Lauda can deliver a first-hand account of how he told his grandfather to stay out of his life, that too in very colourful language. Or tell the story of how he had a running joke with his cousin's secretary about what she was meant to do if Ferrari ever called for him. And how when that call finally came through, he was a little rude to her because he thought she was just continuing on with their little game.

It's hard to pick just a few significant voices in the book, because with each carefully chosen story, another facet of Niki's personality is revealed. Whether it's his razor-sharp intellect, his roguishness, his kindness and humility, it's all in here. But hearing what Toto Wolff, who became one of Lauda's closest friends towards the end of his life, had to say about him, and also listening to Lukas Lauda, Niki's older son speak about his father, is particularly special. However, my own favourite interview from the book is that of Italian journalist Pino Allievi, who speaks about the events that transpired in 1981, just before Lauda's return to racing. I won't give you details of what he said though, for that you will need to read the book. I'll only say that it is the sort of story that reminds you how different motorsport used to be back in the day, and that 40 years really is a long time. And that Lauda was a rare treasure. One who is very evidently missed.

As far as motorsport biographies go, this one is a must-read. Don't miss it.