While the uber cool light sabers that Jedis effortlessly cut through flesh and bone with are still a distant dream, lasers have come a long way in accomplishing things we never imagined in the past. They now allow us to check out of stores faster, store information in plastic cards and access it with a single swipe, correct blurry vision and much more. But who would have expected to see laser light technology in a car headlamp?

Well, the makers at BMW did! But the initial question that strikes us, is what exactly is a laser?
The word LASER is an acronym for Light Amplified by Stimulated Emission of Radiation. Simply put, a laser is basically a device which consolidates light into a thin beam and does not allow it to widen or scatter like that of a flashlight. Lasers are extremely light and up to a thousand times more powerful than normal LEDs. 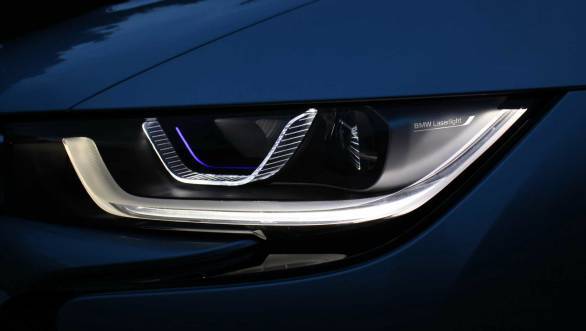 On to the car then. The BMW i8 hybrid sports coupe, which began production in April 2014 will be reaching its customers in Europe by June this year. The i8 is BMW's second release under the 'i' series, a brand which emphasises upon environmental sustainability through lower emissions and greater fuel efficiency. The i8 is pretty much a ground breaker though. It is a hybrid plug-in alright, but it retains all the features of a modern sportscar. But the most significant bit in the i8 is an optional lighting technology known as 'Laser light'.

The basic model comes with what the company claims to be energy efficient full-LED headlamps. These lamps have a reach of up to 300m, with the line of sight being straight ahead when on high beam. With the Laser light upgrade though, these figures change dramatically. According to the German carmaker, the lasers used in the i8 are ten times brighter than the LEDs in the base model. This makes the super efficient i8 save an additional 30 percent of energy to the already efficient LED headlamps! "The laser technology in the headlight perfectly matches the BMW i8 because , like the vehicle, it also delivers impressive performance with high levels of efficiency", claims the mastermind behind BMW's laser light technology, Thomas Hausmann . 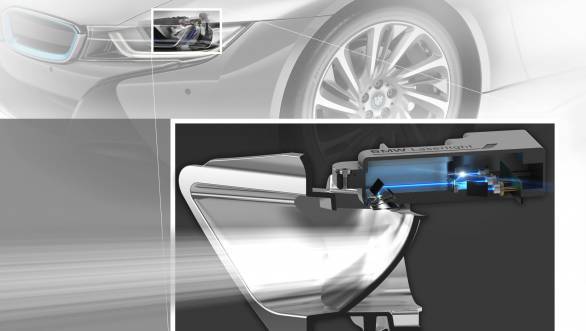 The functioning of the laser diodes in the i8 is especially impressive. Lasers can be an absolute menace to other drivers or pedestrians walking past. Not only are they dangerous in the sense that they are blinding when looked at directly, their sheer intensity is also capable of disorienting approaching drivers. The laser diodes are positioned at the rear section of the assembly and are fired onto a set of mirrors which are located more towards the headlamps. The mirrors then focus the laser beams onto a lens filled with phosphorous. This phosphorous produces the highly intense white light which is deflected onto a reflector and then let out through the headlamps of the car. The beam is then controlled by a feature known as the High Beam Assistant. The assistant uses a camera placed at the front windscreen which detects oncoming traffic and then automatically dips the beam. The reflector in the i8 is also designed in such a way that it diffuses the concentrated white light into a pleasant yet powerful beam, ensuring that extended gazes at the i8's headlamp don't cause any damage to the eye.

The optional laser boost also increases the high beam reach in the i8 to up to 600m, which is exactly double the reach of the light emitting diodes (LEDs). To add to the energy efficiency and increased power, the laser diodes are also ten times smaller in size than LEDs, further reducing the space required for the headlamps.

Space and weight play a crucial role in electrically powered vehicles. Hence, the inclusion of laser lights makes perfect sense in the i8. Weighing as little as 1,485 kg, the car powers from 0-100kmph in a stunning 4.8 seconds!

Shumi got to sit in a demo i8 at his California drive which has the BMW Laser headlights fitted to it. At street speeds, the illumination is completely normal in most respects. But when the BMW driver hit a stretch of dark, lonely highway and turned the headlights to high beam, the effect was startling. The middle of the beam, which runs parallel to the road  in orientation, roughly, is intensely bright at unbelievable distance while the spread of the beam also lights up the intervening distance and the sides of the road with great effectiveness. It would certainly make driving the car out on the open road very easy after dark. BMW say further that to prevent the intense light from blinding other drivers, a sensor reads oncoming traffic and automatically dips the beams. More importantly, the system can change the shape of the beam to ensure the other driver isn't blinded while keeping the road ahead brightly lit.