We've often circled this issue in Better Riding but a lot of how you're riding has to do with what you're seeing. If you see a hazard, chances are you'll slow down. If you see an open road, chances are you will speed up. What you see causes your brain to make decisions about what you will do next and then your hands and feet will spring to life to execute these actions. In the process of discussing the various ideas around vision and motorcycles, we've covered a lot of ground. But I was riding with colleagues the other day and I had a bit of an epiphany.

We were in a well spaced out convoy coming up on a crest on a curvy road and as is wont to happen, when the road gets that kind of good, one truck decides to pass the other using as small a difference in speed as possible. As the two bikes ahead of me entered this situation, the truck finished its pass and approached the top of the crest. The lack of visibility ahead sent the truck and moments later, both bikes back into their lane tucking in to the gap ahead of the slower truck safely. A moment later, I passed all four vehicles without much stress or effort. 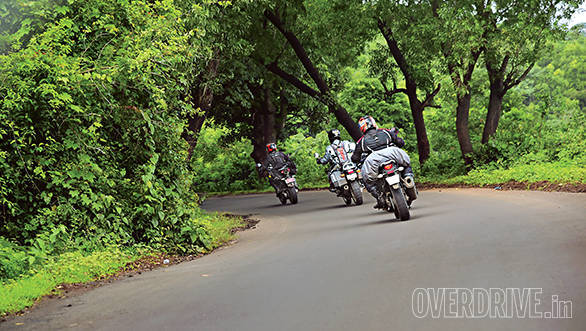 What really happened was that at some point, both the motorcycles got close enough to the truck in front to lose sight of what was coming at them. Because I was further behind, I was able to spot the lack of oncoming traffic and stay out in the opposing lane and pass all four smoothly. That's what gave me the idea of riding to see.

All the tips you're reading in OVERDRIVE which explore the connection between seeing and riding are effectively saying the same thing - if you see more, you'll ride better. Putting that idea into practice is a matter of figuring out which physical locations in every situation offer the maximum sightlines. So in an overtaking situation, a position further back allows you to see more of the oncoming traffic. Our impatience makes us ride right up to the tail light but it blocks sight, gives you less time to react if the vehicle ahead changes speed or direction and generally makes for a hectic ride.

Similarly, when a corner approaches, we suggest you turn the motorcycle later whereas your instinct is to begin the turn early. Early turn in is not in itself a problem but it forces you to make a direction change while you're seeing a relatively small, initial part of the corner ahead. It also has other issues related to the need for high lean angles for a long time but we're not going into that this time. In sum, turn in early and you're looking at a higher level of risk and having to ride with less knowledge of what's coming next. Turn in late and what changes most of all is the amount of road you can see before you commit to a certain speed and direction change needed to complete that turn. It's a small thing that has a massive impact on how fast and how safe you're riding.

The point I am making is simple. The next time you're riding, pay attention to where you are physically on the road in relation to the lanes and to the traffic around you. Within the bounds of rules, regulations and etiquette, actively seek the positions that allow you to see more of what lies ahead and you will immediately find yourself getting faster as well as safer.
The bonus is that this kind of positioning usually also makes you more visible to traffic behind you as well as to traffic heading towards you. Most of the time, drivers who've spotted you will make every possible effort to not collide with you.