The rev needle is creeping ever close to the 6,000rpm redline, and the bug eyes in the Baleno RS' rearview mirror refuse to grow smaller.

Clutch in, fourth gear, clutch out. Quick glance up to the mirror. Nope, still there. There's an impossibly long and ever-so-gradual left-hander coming up. I think I can shake the black motorcycle off my tail. 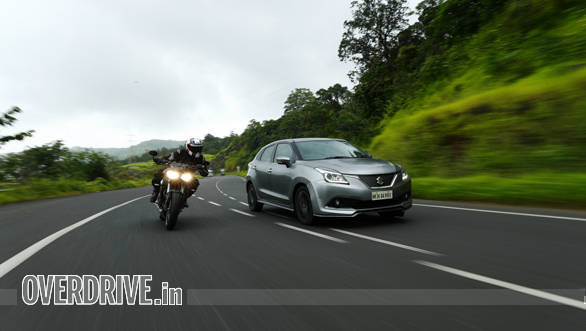 Caress the brakes, shift the weight forward, turn in. Glance up.

I see the rider shift his own weight, stick a knee out, and lean into the corner. The Baleno leans the other way, I lean in the driver's seat to counter it. The gap grows, as does the grin on my face. The mid-range on this thing is astounding! Much stronger than the 1.2-litre naturally aspirated on the regular car, it pulls hard from above 3,000 on the dials to a few hundred short of the redline. I don't get to there this time though. There's a speed breaker ahead. The grin disappears. 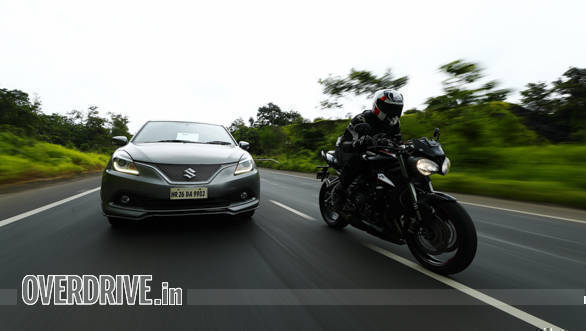 Hard on the brakes, thank my stars for four-wheel disc brakes, downshift once, twice, thrice.

The Baleno is light. 950kg light. But it's still got six times the mass of the motorcycle. The motorcycle sheds speed more effectively and has race-bred Brembo M50 four-pot monoblocs on the front. He overtakes under braking!

Front wheels at the speed breaker, side by side now.

I can afford to carry a little more speed over the hump. I have suspension travel, taller tyres, and most importantly, ground clearance on my side. But I do have a whole car length to cross. The motorcycle just has two wheels and 1,395mm separating the two.

He gets on the throttle, and the smooth baritone turns into a deep howl that leaves the Baleno in its wake. 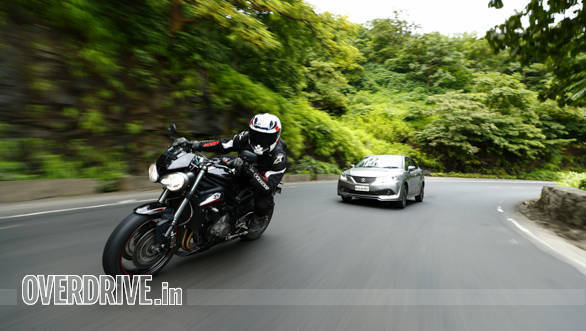 I can imagine there's a stupid smile plastered across Rishabh's face, inside his helmet. We're on the busy road to Nashik, from Mumbai. But this early in the morning, there's only the Maruti Suzuki Baleno RS and Triumph Street Triple RS on it. Our destination isn't a breakfast spot, or Nashik itself. Our destination is a section of twisties called the Kasara ghats, which has a separate uphill and downhill road. And so far, I'm thoroughly enjoying the journey getting there. Our side of the road is two-laned, with a divider separating the other side. I would be able to comment on how picturesque it is, except everything was a blur of green. 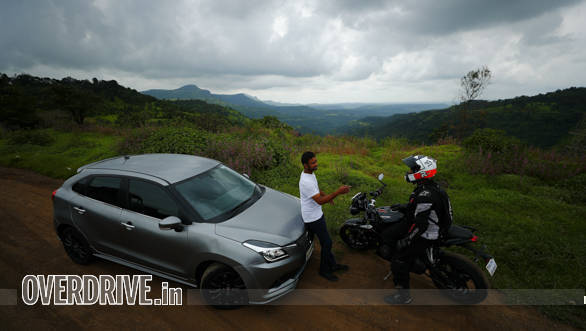 We stop for breakfast. More than anything, we stop because our faces hurt from grinning so much! Two coffees and two plates of misal pav later, we still can't stop gushing about the experience  and we haven't even reached Kasara yet! The Baleno RS and the Street Triple RS share more than just surnames  they're both powered by inline three-cylinders, both put out around 100PS, both cost around Rs 10 lakh, and both are the sportiest versions of the originals. 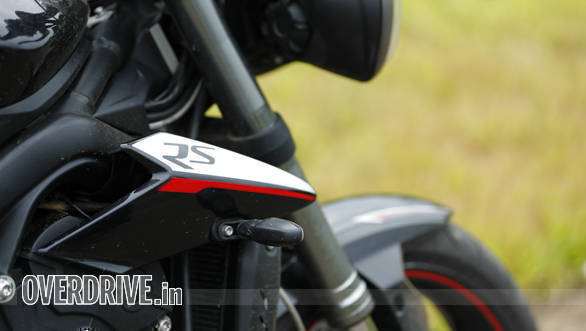 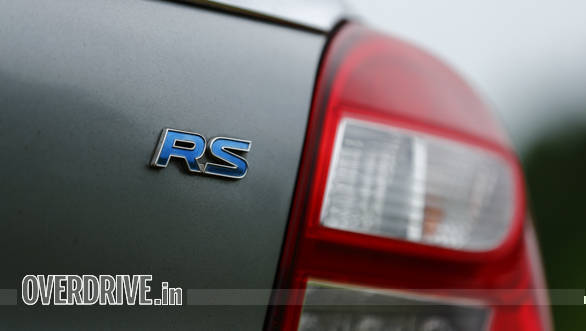 Both are great fun, too. The Baleno RS has the right basic ingredients for me  a fun chassis, nice gearbox and reasonably strong motor. Its 102PS of power peaks at 5,500rpm, but its substantial 150Nm of torque courtesy the turbocharger comes in pretty early in the band and stays till 4,500rpm. So it comes alive early on and will still rev clean to its redline, making power along the way. Though it's 998cc, Boosterjet thrum definitely can't be compared to the sound that the 765cc Triple makes on its way to redline. In fact, when the limiter kicks in on the Baleno, the Street Triple is just beginning to come alive. Rishabh tells me it's a whole different beast above 6,000rpm. I look up the specs. And promptly spat out my coffee.

123PS at 11,700rpm! I thought this was a fair fight for the heart of an enthusiast  I thought this motorcycle only made 100-odd PS. Rishabh explains that, with the new generation of Street Triple, Triumph moved the ballpark for a middleweight up a bit. I already knew the Triple RS came with more special components, but the list is pretty exhaustive. Not only is it up 10PS of power, over the regular models, it also gets a quickshifter, full-colour TFT dash, a ride mode for the track, stickier Pirelli Diablo Supercorsa rubber, top-shelf Brembo brakes, fully adjustable Showa BPF front forks, and a fully adjustable Ohlins rear. Phew. 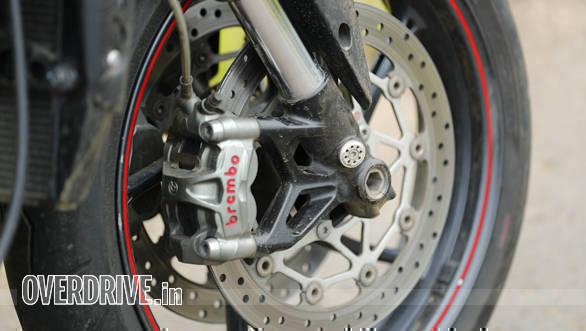 In comparison, the Baleno RS gets an extra 18PS, 35Nm torque, four wheel disc brakes, stick-on bodywork, and RS-branded floor carpets. Oh, and the stock alloy wheels are painted black. Is that really enough? I'm reminded that the Baleno with this Boosterjet engine is actually sold in the UK as a practical hatch. Well, the driving experience is still different enough from the regular 1.2-litre engine-Baleno, though I'm starting to wish my four-wheeled RS had more special bits to remind me of the fact. 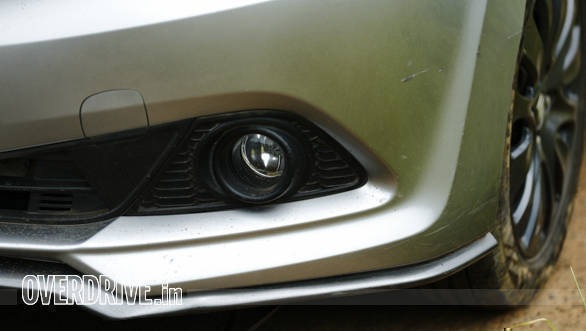 Back behind the wheel, I patiently wait for Rishabh to gear up. He does, rides two feet forward and realises his helmet strap isn't buttoned down. Cue another four minute wait to pull off gloves, button the button and pull gloves back on. I start to regain faith in my decision in the Baleno RS as a fun tool to own  I don't even have to take the keys out of my pocket to drive it!

I feel better when we hit the uphill section  the turns are fairly tight, and the straights short. Rishabh doesn't have a chance to wind the Street Triple up to its full potential. The Baleno encourages nailing the throttle early, diving right into the mid-range. Between second and third gear, I pull away just a little more at every corner. At the top, I wait for him  and the inevitable twirl of his gloved finger. Let's go again. 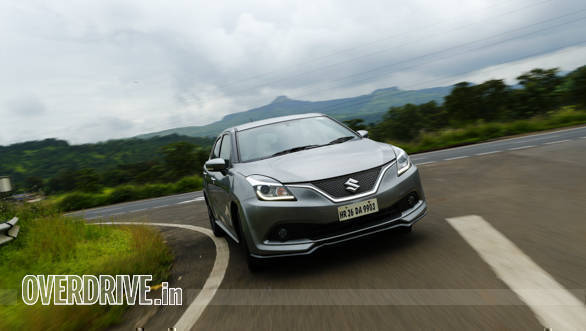 The run down is the polar opposite of the way up. Long sweeping corners, much wider, and frankly more scary. I have two extra patches of rubber in contact with the road, this will be a cinch. Except, I've underestimated the Street Triple RS. The straights become the stage for the lovely triple to sing its 765cc heart out. And every time it does, Rishabh passes me. I understand why people say the Triumph triples sound distinct and memorable. It's full, throaty, and loud. Very loud. Even though I'm getting overtaken, I don't mind it. I hear Rishabh keeping the throttle pinned on each gear change, with the quickshifter barely dropping the crescendo of revs each time. It's almost frightening how much speed the Street Triple can carry through a corner, when Rishabh has the width to line it up  and he says a little fine tuning of the suspension would've increased his comfort levels, and the speed. 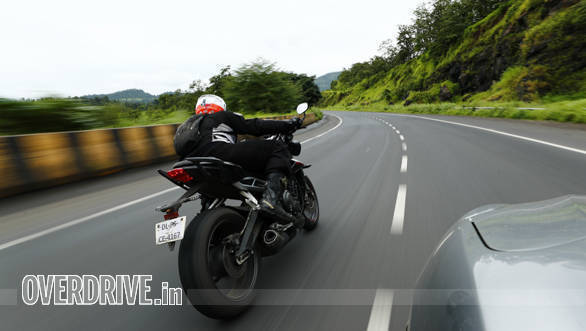 We pull over at the bottom of the Kasara ghat and try to take stock. Which RS should an enthusiast on a relative budget look at? We're sure anyone who has motorcycling in his blood will pick the Street Triple RS, with its exotic componentry. It's eminently more special, and is basically a track-ready package. It also takes more skill, balls and heart to get the best out of it. The Baleno RS on the other hand is greatly forgiving, and a deft handler, having proved itself on the track and in the real world. There are a few times I wish it were a little more special, in the way it looked at least. But at the end of the day, its limits are super fun to explore  made more so by having an evenly matched motorcycle to spar with. If wishes were horses, I'd have them both in my stable. 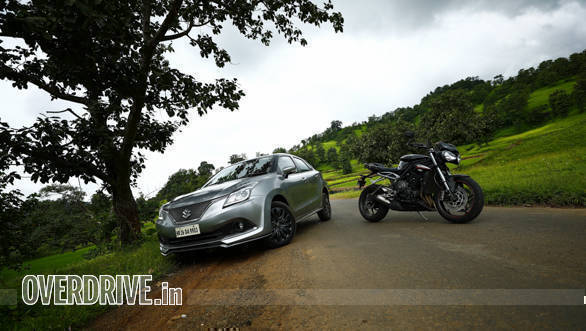 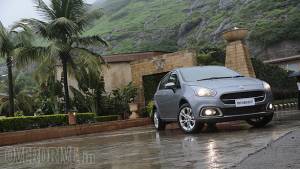