Audi gets lasers for headlights

If anyone ever told Thomas Edison that we could get light from points as small as pinheads in the future, he would probably laugh his head off or shut the door on our faces. And that the same technology can be extended to the automobile would have been a suspension of disbelief at that time. That though, is exactly what happened a few months ago. Audi came to the Consumer Electronics Show (CES) in Las Vegas and showed off its Audi Sport quattro Laserlight Concept. Like the name suggests, the car employs lasers in its headlights to scare the darkness away. 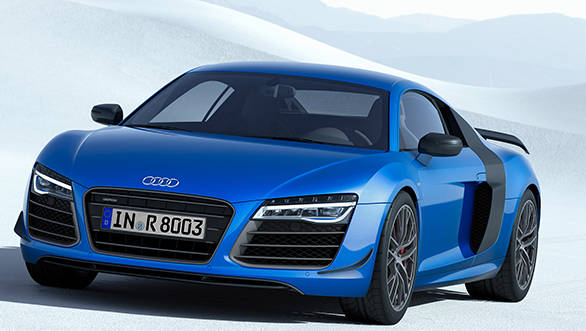 Audi has led the field in terms of automotive lighting technology; they were the first to get xenon headlights for their A8 way back in 1994. They brought in day time running lights for their W12 A8 in 2003 and brought in LED headlights in 2008 before the Mercedes-Benz S-Class. They were also the first to use navigation and GPS data to adjust the headlights according to the curves of the road in 2010, a feature which the Matrix LED system makes full use of.

The Laserlight Concept is a further refinement of the Sport quattro concept which was showcased at the 2013 Frankfurt Motor Show. The headlamps in the Sports Quattro Laserlight Concept were divided into two major sectors - the outer sector which consists of the Matrix LED system, active when driving on low-beam and the laser module which will use its high penetration illumination in tandem with the LEDs when using high beam. 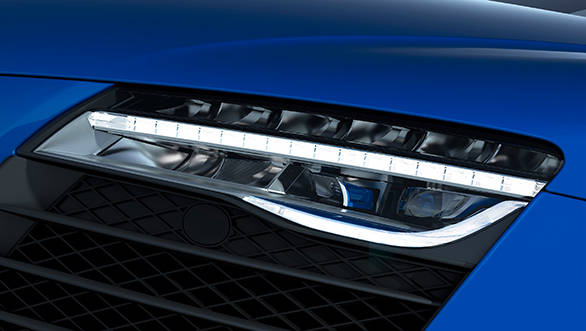 Lasers are expensive and won't be seen in the mid-range cars very soon, but perhaps in the future it may be possible

Lasers are expensive and won't be seen in the mid-range cars very soon, but perhaps in the future it may be possible. Lasers are smaller, brighter and more energy efficient than LED headlamps. Audi's laser headlamps use less than half the energy utilized by LEDs and the laser diodes emit 170 lumens per watt, while LEDs generate only 100 lumens (brighter is better).

At the key-note speech at CES, Ulrich Hackenberg, Audi's board member for technical development announced that the laserlight system would make its first appearance at the legendary 24 Hours of Le Mans endurance race on their race car - the R18 e-tron quattro. He said that it would be incorporated in the Matrix LED lighting system which the A8 production model uses and also promised that we would see these very laser lights on a production car.

Well, Audi didn't disappoint! They launched their new R8 LMX last week; the car is a limited run version (only 99 units) of the R8 V10, available only as a coupe and in Ara blue. The standard V10 engine has been tweaked a little to put out 577PS of power and will go from 0 to 100kmph in a mere 3.4s (same as the standard R8 V10). Now for the good part; the car has the Matrix LED headlights and a slightly more refined version of the laser system that Audi had promised. The LMX utilises a pinhead-sized laser module, placed in each headlight, comprising of four high-power laser diodes with a diameter of 300µm. This generates a blue laser beam with a wavelength of 450 nanometers which after passing through a phosphorus converter transforms into white light, ideal for the human eye, enabling the driver to recognise contrast more easily and helping prevent fatigue. Now, this beam supplements the Matrix LEDS and increases the field of view to about 500 metres. All this while achieving twice the luminosity of standard LED lights, making it even sharper, safer, and more efficient.

The Matrix LED system, which Audi describes as "three-dimensional, dynamic and interactive", consists of 25 LED diodes divided into five sections which shine through a common reflector. Each section has a separate control unit. When set to 'automatic' and when the high-beam is in use, the system uses cameras to view the surrounding areas and accordingly adjusts the beam while maintaining full intensity in places beside or between in order to prevent inconveniencing pedestrians, on-coming and preceding commuters. The system gets activated on city streets on hitting 60kmph and on highways at 30kmph. When manipulating the lights, the system sequentially either dims, shuts off or brightens one section of LEDs at a time allowing for a smooth transition. The Matrix LED system is already the most advanced lighting system available on the market today and adding lasers to the fray just makes it even better.

Now for the all important question for supremacy - 'Who will bring laser light technology to production cars first?'

BMW has also been working on laser technology for the past few years and will be bringing laserlight technology to their new i8 electric sports car as an option (the Audi R8 LMX gets it as standard). So it will only be official when either the i8 or the R8 LMX are officially on the road. Audi began taking orders for the LMX and have stated that they will begin deliveries by the summer of this year. Reports say that BMW will begin deliveries of the i8 in June but the cars with the laser light option will be delivered in autumn. So it might be too soon to say just yet. 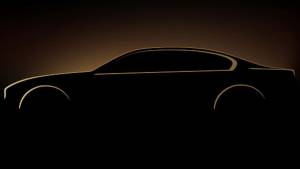 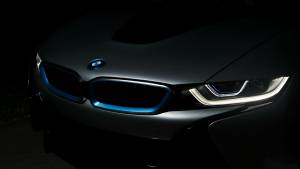