Vijay Parmar is not just a renowned rally rider, but an off-road driving and riding guru too. He is the organizer of the Raid De Himalaya and founder of Himalayan Motorsport Association, which conducts motor sporting events in the Himalayas. Vijay is based in Shimla and is easily one of the most qualified persons to comment on the advantages of the Atal Tunnel and the care one needs to exercise while driving through it. Bob Rupani in this conversation with Vijay Parmar, uncovers several lesser known aspects about the Atal Tunnel, Rohtang. 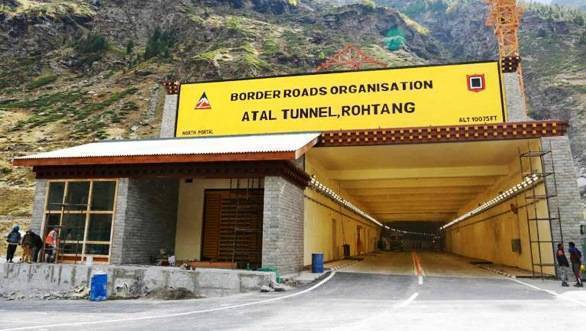 This tunnel provides year round connectivity to Lahaul. But some precautions need to be taken while going through it in winter. (Image Source- First Post)

1) When did you drive through the Atal Tunnel and what were your feelings?

I drove through the completed Atal Tunnel for the first time on 4th October 2020, a day after the inauguration by the Prime Minister. On two occasions before that, we had been permitted to drive through the 'under-construction' tunnel. This was in September 2018, basically as part of a rescue effort, to bring back to Manali, cars that had got stuck in Keylong, due to unseasonal heavy snow.

While going through the tunnel, I was thinking that since everyone will now use this route, the drive over the actual Rohtang Pass would be less of a nightmare. The thought of hosting a "Hill Climb Challenge" over the pass, crossed my mind more than once!

2) Some BRO (Border Roads Organization) and army people have been quoted as saying that due to the Atal Tunnel, they may now be able to keep the road from Manali to Leh open even in winter. Do you think this is possible?

It will be possible to keep the Lahaul and Pangi valleys route open all year round, within the framework of snow clearance on the roads, by the BRO. However to hope to reach Leh during winters, without tunnels under Baralacha La, Lachulang La and Tanglang La, is no more than a fantasy. In any case snow clearance of 40 ft. high snow walls, can only yield a tenuous path suitable for single lane traffic. 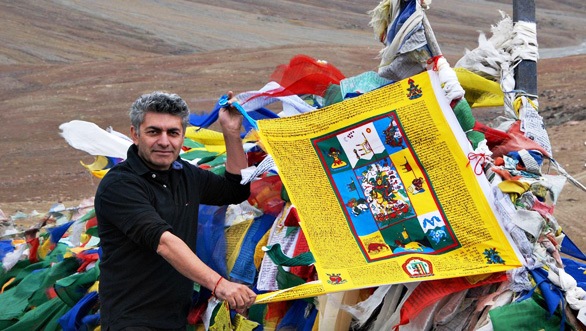 Vijay Parmar is the organizer of the Raid De Himalaya and an expert on driving in high altitude regions.

3) What do you see as the benefits of the Atal Tunnel? Will it be possible for example to drive over Kunzum La and get into Spiti too from Lahaul?

The benefits of the Atal Tunnel are already being felt. Tourism will spill over into the Keylong side yielding huge infra growth for this area. The economy will boom.

Along will come associated requirements for traffic policing, garbage management and parking areas that inevitably result from an increase in traffic. In five years, Sissu will start looking like Manali twenty five years back, which may not be a plus!

But, even with the Atal Tunnel opening, it will not be possible to get into Spiti in the winter. Not unless another tunnel punches a hole under the Kunzum La. Even then, the avalanche paths between Chotta Dhara and Batal will need to be cleared daily to allow access to Spiti.

4) What are the likely benefits of the tunnel to the Indian Army, and its strategies and preparedness to protect our borders in the Ladakh region?

The tunnel will have no effect on the military preparedness of the army on either Chinese or Pakistani borders. At most, it will save trucks a 3-hour haul over Rohtang La. Nothing more. 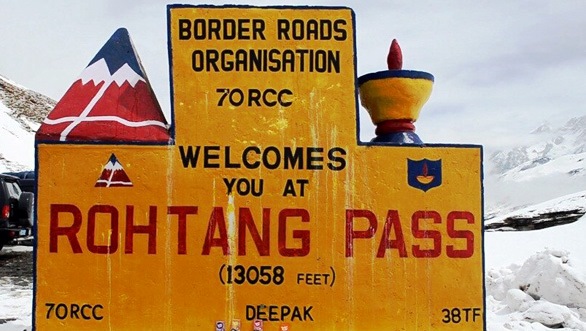 The Rohtang Pass may host a challenging, off-road hill-climb event in the future. (Image Source-NW 18)

5) How will the tunnel affect the local people of Lahaul and even Ladakh?

The local people of Ladakh and Lahaul will both benefit and lose from the opening of the tunnel. Lahaul will benefit from year-round tourism and ease of clearing crops of peas, potatoes, and apples from its fields.

Before the tunnel, the driving time between Manali and Leh was around 11 to 12 hours. So people halted for the night at Sarchu or Pang. But now with the time lessening by 3 hours or so, these overnight halts will be reduced to almost nothing. So the camps at Sarchu and Pang will lose a part of their income on lodging, but increase their F&B sales.

For the people of Lahaul, the big gain will be a release from captivity of four winter months of isolation. The access to better medical aid, fresh food supplies, and even travel options will free the Lahaul residents from this sense of captivity. Tourism will flourish even in the winters, bringing both livelihood and daily activity. The loss will be to the close-knit community that grew closer in the winter months, strengthening their traditional ways of life.

6) The inflow of tourists to Lahaul will obviously increase due to the tunnel. Will this not harm the ecology of this pristine region?

The increase in tourism will be marginal in the summer months as the same number that came over Rohtang Pass will drive through the tunnel. Rohtang will get a reprieve from these hordes and in the overall ecological balance, things will remain the same. The increase of tourists initially will be much more in the winter, but the extreme cold and lack of infrastructure to deal with it, will soon turn that inflow into a trickle.

7) What can the authorities do to prevent commercialization and over-exploitation of this area?

Nothing. Economics will rule. It is not the job of the authorities, whoever they may be, to try and change the march of progress. The locals will welcome tourism, additional revenue, and freedom from a winter prison with open arms. Where do the authorities come in? 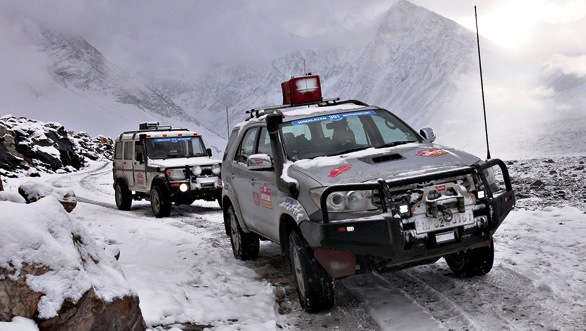 Vijay Parmar has explored and mapped almost all possible roads and motorable tracks in Himachal, Ladakh and J & K.

8) It is being said that with the tunnel being operational, the road over the Rohtang Pass will no longer be maintained or cleared. Will you miss driving over Rohtang?

This is untrue. The road over the pass will be maintained as an alternate route across to Lahaul, albeit with lesser interest, deployment, and resources. We are looking forward to it breaking down and becoming an off-road driving challenge.

9) The tunnel will reduce the driving time to Lahaul and Leh. Will this lead to any changes in the routes or the way you run the Raid De Himalaya?

The Raid de Himalaya was buried with honours after its 20th running! We grew too old to play the same game again and again. New challenges like our motorcycle expedition in deep winter to Daulat Beg Oldie and the Karakoram Pass in 2019, offer more challenge. 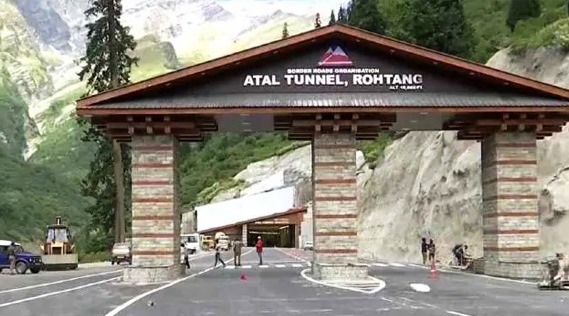 In winter, the temperature difference between one side of the tunnel and the other could be over 30 degrees! (Image Source-ANI)

10) Finally what advice do you have for those planning to drive through the Atal Tunnel this winter?

It must be remembered that with the tunnel reducing driving time, a very significant change in temperatures and oxygen levels will now happen in just 15 minutes! And this lack of acclimatization time, will lead to AMS (Acute Mountain Sickness)! One should come well prepared as the temperature differences, especially in the winter, may exceed 30 degrees Celsius. Yes, +15 degrees in Manali, may turn to -20 degrees across the tunnel! So in 15 minutes you may have a temperature difference of 30 degrees or more!

Coming out of the tunnel onto a road on the other side covered in snow and ice, will have significant hazards for two-wheel-drive cars as against 4X4's (four-wheel drives). Accidents will be common if snow chains on tyres are not used. Medical facilities to deal with all this, needs to be in place.

As the tunnel was planned 40 years ago, it lacks lay-bys. Vehicles breaking down cannot be parked safely to one side and this will quickly cause a traffic pile up. So one must be aware that the situation calls for you to switch-off the car engine, move away to an exit, and await clearance of the blockage. Staying in the car with the engine running, will ensure CO (Carbon monoxide) builds up in the tunnel that can at some point be fatal.

Also stay well within the speed limits as the tunnel is built under an aquifer, which causes it to leak water onto the tunnel's tarmac. In winter this water can freeze into slippery black ice as the tunnel will act as a venturi for icy winds blowing in through the North portal. If you over speed on such a slippery surface, your car can easily go into a slide causing a major accident! 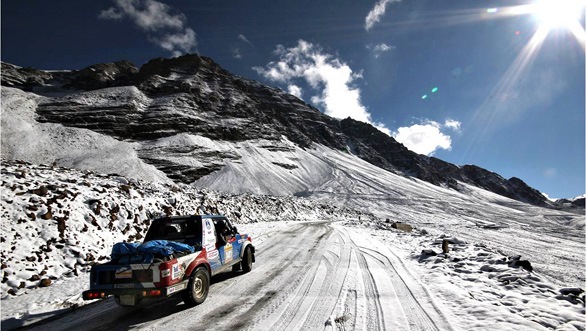 Thanks to the Atal Tunnel, one can now even drive to Lahaul in winter. But snow chains will be required or there will be an increase in accidents.