Bajaj Auto and Triumph Motorcycles have issued jointly a press release today announcing the signing of a brand-new global agreement. Bajaj Auto currently has products ranging from small motorcycles like the Platina and the Discover as well as premium motorcycles like the Pulsar and the Dominar. Triumph sells a range of motorcycles above 700cc from the classic-styled Bonnevilles, the sport-naked Street and Speed Triples to big cruisers like the Thunderbird Storm and the Rocket III. The Bajaj Auto and Triumph agreement is skimpy on the details, but let's look at it in detail. 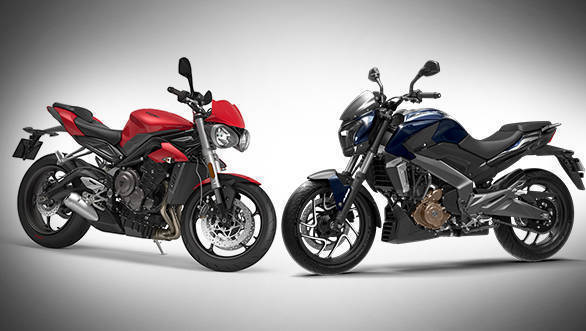 The primary target is the mid-capacity motorcycle. Triumph was working on a made-in-India platform a few years ago. That project was shelved and never heard of again.

Triumph is a versatile brand that contains retro-bikes as well as sport-nakeds, adventure tourers and cruisers. I hesitate to add sportsbikes to the list because the Daytona's future is currently unknown. Expanding the range to include a 300-500cc machine should be a natural extension.

However, developing a smaller bike has proved to be hard for Triumph. On the flip side, Bajaj is at the other end of the problem with products up to 400cc. It's aware that the next growth spurt in premium bikes will come in the 400-600cc class. It is yet to fill out with a diverse range of capable and well-priced products. The recently launched Kawasakis Z650 and Ninja 650 are the two exceptions with great ability and unbeatable pricing.

It's easy to think that product development is the only thing on the table, but Bajaj and Triumph have taken pains to clarify that nothing's off the table. Except for equity, that is.

The official ambit of the agreement, according to the release is "brand position and perception, design and development technology, quality and cost competitiveness and worldwide distribution". That's cooperative work on how the brands will be marketed in India and globally. That's how the product lines will work within each company, as well as together. That's behind the scenes work to make Triumphs cheaper to make and Bajaj's better in actual as well as perceived quality. That is also cooperation to use Triumph and Bajaj's global sales channels to help push both brands.

This is very interesting because it changes how much resources are available to both companies at every level of their business. This could, potentially, enable both to take on much bigger players whose scale is usually hard to battle against.

This is what Triumph is after, the big goal of entering the agreement with Bajaj. Bajaj-KTM's work has shown everyone the benefits of the arrangement. Bajaj appears able to bring cost efficiency to the table that dramatically alters the business - KTM's record since Mattighofen and Pune developed an affection for each other is stunning.

What I see happening is the joint development of 400-600cc machines that will wear Triumph and Bajaj branding in the near future. The machines will probably have significant differences in the final specification, pricing and positioning. But they will be cheaper to develop and make, thanks to the joint development work. As is usually the case when this happens, both companies will pick up nuances and ideas from each other that will show up in other non-joint products in time.

Let's be clear that this doesn't mean you will be able to buy a Bajaj-Triumph product this Diwali. The product development lifecycle is usually 30 to 48 months, and assuming the cooperation gets going today, you're looking at early 2020 for the first wave. The exception is if Triumph and Bajaj start their collaboration with a project that's already half-done at either manufacturer and shortcut the lead time.

Bajaj Auto will also expand the range on offer in their distribution channels according to the release. This is a pretty clear statement of intent and it applies to Bajaj's Indian as well as international operations. This is significant for both companies.

For Bajaj dealers, it means a new revenue stream is in the offing. It might not be, immediately, a very high volume pipeline but it promises to be a high margin flow. Bajaj dealers, it is known, already put enormous pressure on Bajaj Auto to re-enter the scooter market, something that company president Rajiv Bajaj has not agreed to do, so far.

Is this going to include the KTM network? I would suspect that Triumph will want positions in Bajaj showrooms, a bigger network. The KTM spread has a very distinctive, clearly positioned brand already dominates proceedings.

The other little-realised fact is that India's automotive market is dominated in every segment by one product with, at best, a strong second product. Everyone else is more or less a bystander. Entering new segments and dominating them is literally the only game in town, and it is vital to both Bajaj and Triumph as businesses. Working together will be more cost-efficient and it should also give them access to more products, more often.

What segments should Triumph and Bajaj enter? I would love it if you put your ideas in the comments.

Since I know you're going to ask, the short version is that the Volkswagen Group Board did not find enough support to dispose of the few brands and entities that were being discussed as up for sale. That includes Ducati and as of now, the Italian motorcycle company remains part of the Volkswagen Group and is not for sale.

This is the part that is left unsaid, as far as I am concerned. Because equity sale aside, Bajaj Auto has exactly the same sort of agreement with KTM.. Update: Bajaj officials have confirmed that Husqvarna is, in fact, owned by KTM and AG not Stefan Pierer personally. KTM AG is the company that Bajaj Auto part-owns - 48 per cent stake.

KTM and Husqvarna already share platforms and engines. They also share manufacturing, here in India at Bajaj Auto's Chakan plant and at KTM's Mattighofen facilities. We also know that Bajaj's new Pulsars and Dominar were developed in projects that progressed right beside KTM engines of similar displacement albeit the motorcycles themselves aren't direct rivals in role or pricing.

So does the new agreement imply that Triumph, KTM and Husqvarna will all get into co-development with Bajaj Auto as the central executive or catalyst unit? Or will Bajaj R&D now has two sets of projects with Bajaj-KTM-Husqvarna and Bajaj-Triumph as two sides of the pit garage as it were? Only time will tell. To me, the four-company together arrangement makes the most sense given how little the positioning and perception overlap is between all the four brands. But if that were the case, KTM-Husqvarna should also have had a release out today.

This is the murkiest part of the agreement and we wait for Bajaj Auto and Triumph to clear this up.

In essence, Triumph and Bajaj have agreed to cooperate at every level of their businesses with a focus on the middle-weight motorcycle and the expansion into new segments. We wait for details but joint development of new products is clearly on the cards. As is the overlapping of sales of Bajaj and Triumph motorcycles through each other's sales channels in India and other markets. The timelines are unclear but the motorcycle business typically moves much slower than the motorcycles that make up this industry.

NOTE:
This story was updated to reflect a clarification from Bajaj about the ownership of Husqvarna

Here is the full text of the press release for you to read for yourself:

Triumph motorcycles and Bajaj are pleased to announce their global partnership. The objective of this non-equity partnership is to deliver a range of outstanding mid-capacity motorcycles benefiting from the collective strengths of both companies.

We hope to bring to bear upon global markets, the individual strengths of the partners including brand position and perception, design and development technology, quality and cost competitiveness and worldwide distribution.

This new global partnership will enable Triumph to significantly expand its global reach by entering new higher volume market segments, especially within the emerging markets across the world. Bajaj will gain access to the iconic Triumph brand and its great motorcycles enabling it to offer a wider range of motorcycles within its domestic market and other international markets.

Triumph and Bajaj are excited by the opportunities of this partnership and the prospect of entering new market segments, thereby reaching a whole new group of motorcyclists across the world. We will provide further details in due course. 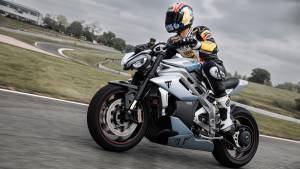 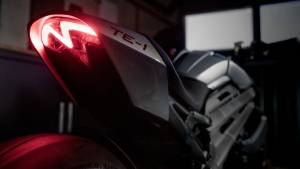