Mumbai is infamous for a lot of things. The biggest gripe that all Mumbaikars have in common is traffic. With a large number of cars using the city's roads every day, vehicular congestion is inevitable. To get away from the hustle and bustle of the city life, we all look forward to the weekends. Now, there's no denying that there are plenty of places to chill in and around Mumbai. However, for those looking for some peace and quiet time, the options are truly limited. Particularly, if you are looking for a place that not only lets you indulge in adventure activities but also lets you experience a sea of tranquillity. Then even Google will have difficulty in recommending one. However, we were keen to find out if such a place existed.

Our partner in crime for this offbeat mission was the 1.5-litre diesel Honda BR-V. The premium compact SUV has an imposing stance, which helps while attempting to manoeuvre through city traffic. The diesel engine has a claimed fuel efficiency of 21.9kmpl while the 6-speed gearbox is a slick unit. It can seat seven and still offers a reasonable amount of boot space and comes equipped with plenty of convenience features like electrically adjustable and folding wing mirrors, projector headlamps and rear AC, to name a few. A perfect partner then. 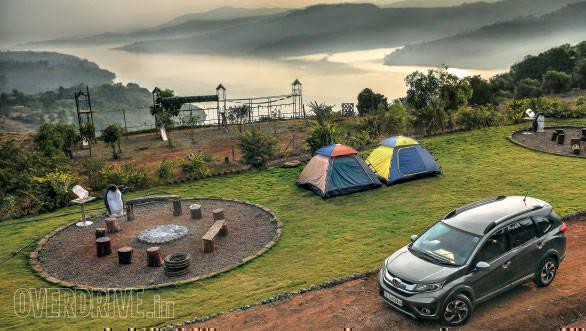 We began our journey at 6am in Mumbai and, as you can imagine, the sun wasn't out yet.  This being the city that never sleeps, there were still quite a few cars on road. But the BR-V's engine generates 200Nm of torque which ensured that getting ahead of everyone required a small flex of the right foot. The smooth engine allowed us to cruise at a decent speed, and within an hour we had reached the start of the Mumbai-Pune Expressway. By this time, the passengers had fallen asleep as the suspension did a fabulous job at soaking up the impact from bumps and potholes. We were now on our way to Kolad, a quaint village in Raigad district of Maharashtra. 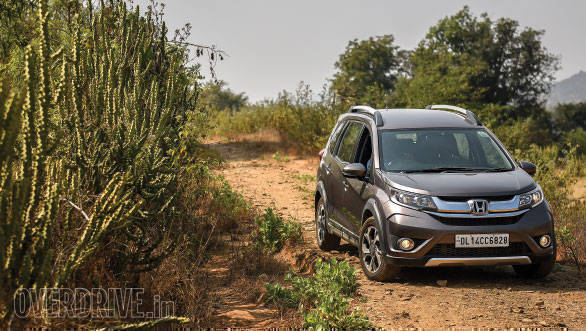 To get there, we get off the Mumbai-Pune Expressway at the Khalapur toll and onto the state highway which connects to Pali Village.  The state highway is littered with many roadside joints serving delicious fare. We couldn't resist and gorged on some delicious vada pav and bhajiyas. The road through Pali Village was very narrow in some sections with barely enough room for two cars to pass through. However, the light steering of the BR-V and good visibility meant we got out without breaking into a sweat.  The stretch from Pali to Kolad is very scenic. The best bit is that the road is very well-paved too and not many people take this route to Kolad. As a result, we reached our destination in under three hours. 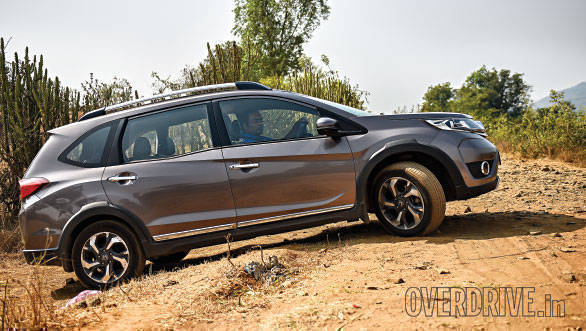 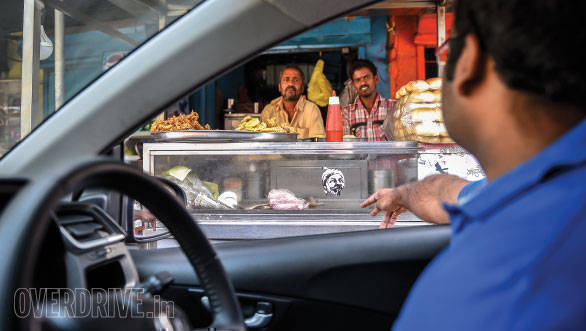 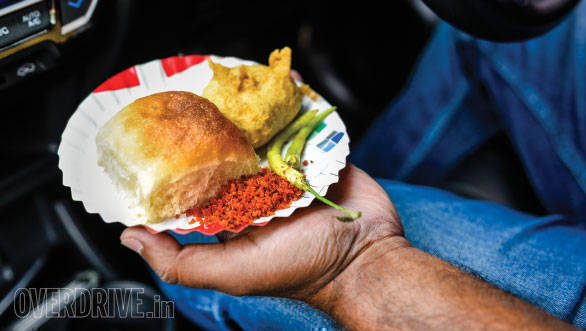 Kolad is around 120 kilometres from Mumbai and the village is located on the banks of the Kundalika River. Unofficially, it is known as the adventure village of Maharashtra. It is a white water rafting destination that offers rafting thrills throughout the year. Depending on the level of difficulty, rivers are graded between Class I to Class VI. At Kolad, the rapids range from Class I to Class III. After enquiring with the locals, we were guided to Wider West Adventures which offers a variety of adventure activities ranging from riding jet skis to kayaking to boating to mountain biking and archery as well. We spent the entire morning taking part in various activities. 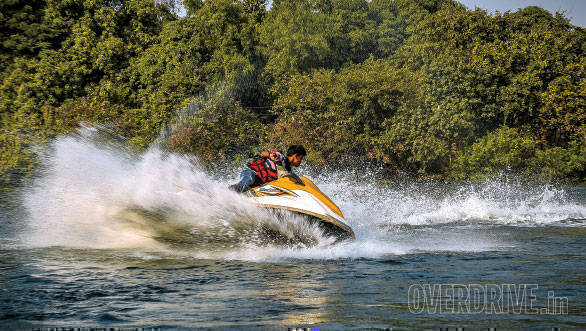 Eventually, we got tired and felt it was time to move to an isolated location where we could simply laze around in the evening. By noon we began our journey towards Pune which is 113km away. Google said it would take us around three hours to cover the distance as it passed through Tamhini Ghat. This stretch also impressed us as it was not only well paved, but speed breakers and intersections were clearly marked. 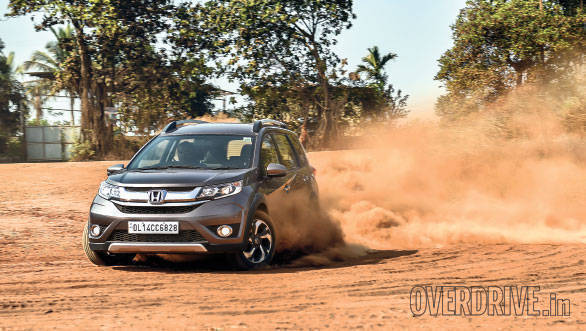 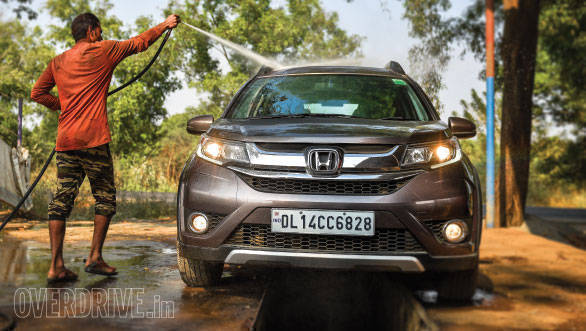 After playing in the dirt, the BR-V deserved a good wash

There were plenty of open spaces around the highway, and we couldn't resist to stop for pictures. There were some broken trails too which took one through barren fields and deeper into villages. The high ground clearance of the BR-V meant that we were able to get off the road comfortably and tread across various surfaces. Once we were done taking pictures and fooling around on dirt roads, it was time to hit the highway. The climb up Tamhini Ghat was completed real quick. The punchy mid range meant we could stay put in fifth gear. A downshift was called for only when overtaking slower moving trucks.

The BR-V, despite being a long car, was easy to manoeuvre through some of the tight corners. The diesel engine impressed us with its fuel efficiency as only three fuel bars were down while the on-board display was showing an average efficiency of 16.7kmpl. We reached Pune comfortably by early evening and were very hungry by then. A sumptuous meal comprising of mutton rassa and bhakri managed to calm us down. 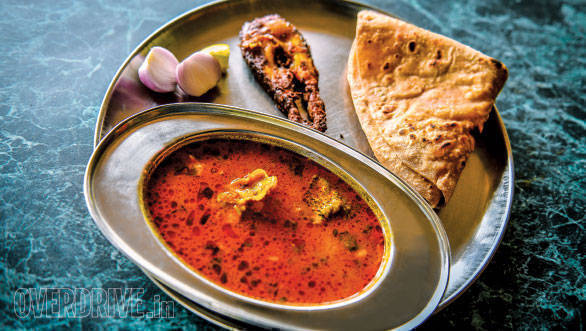 We even devoured as many fish thali as we could

It was now time to head to Maval which is located around 40 kilometres from Pune. The sun had already set by then and the outskirts of Pune were covered in darkness. Usually, driving at night through rural roads is tiresome. However, the BR-V's  projector headlamps ensured visibility wasn't an issue. The last few kilometres before Maval comprise entirely of broken roads with sharp potholes. The suspension did a great job at keeping all occupants comfortable.

In Marathi, the word  Maval means the direction in which the sun sets. This region is in hilly terrain which is part of the Sahyadri range and offers some picturesque views of sunrise and sunset. Apart from its fascinating beauty, this place is fast gaining popularity among thrill seekers. To put it simply, if you love the outdoor life, then you will not want to leave Maval. We reached our final location, Adventure Maval, by 10pm and, as expected,  there wasn't much of a view. With the temperature hovering around 14°C, we were more keen on lighting a bonfire and getting our jackets out. After settling down, we realised that we were already covered by a blanket of stars. 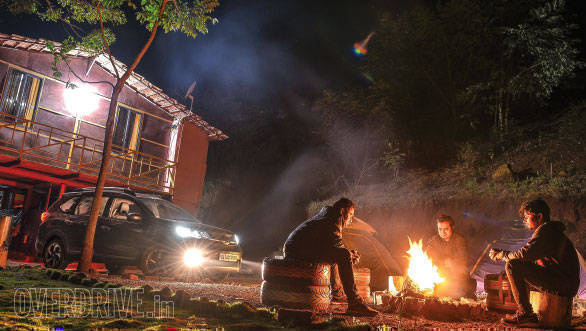 We decided to call it a night after around an hour or so as we didn't want to miss the sunrise. The lead image is proof that getting up early was totally worth it. We then stacked up on as many fish thali as we could before making our way to Mumbai. The drive from Maval to Mumbai was covered in under three hours.

Like any memorable road trip, we got to experience some good as well as bad roads and relish some delicious food. The Honda BR-V turned out to be an ideal companion and kept us comfortable throughout the around 450km round trip. The icing on the cake was our discovery of picturesque places that not only appeal to the thrill seeker inside us but also the peace seeker. The mission was a success!