About The London to Sydney Marathon

The 1977 London to Sydney, where Sobieslaw Zasada did that incredibly fast run from Delhi to Bombay, was the second edition of this legendary event. Conceived in 1967, in a period of time when there was considerable despondency in Britain, the ambitious plan to run a rally of cars all the way from London to Sydney, in Australia, a distance of 16,694km caught the imagination of many people. With prize money of £15,000 as an attraction, and the thought of driving across the globe as a motivation, 98 cars took the start in London, on 24 November 1968. Following a route that took the cars to Paris, then Turin, Belgrade, Istanbul, Tehran, Kabul and then to Pakistan, the cars entered India on 30 November, not even a week after flag off. From Bombay, the cars were shipped to Australia, for the final leg. The elaborate roll-bars integrated with the bull-bar, were meant to be protection from collisions with kangaroos in Australia

With newspapers covering the progress of the cars on a daily basis, people in India were forewarned, and thousands (many say lakhs) lined up alongside the route as the competing cars thundered by, through Punjab, to Delhi, arriving on 30th November. In the wee hours of the morning of the 1st of December, the cars left once again, winding their way through Agra and Indore. Apparently almost all the residents of Indore came out to welcome the cars, and it is said that it was the best reception the event got anywhere in the world. 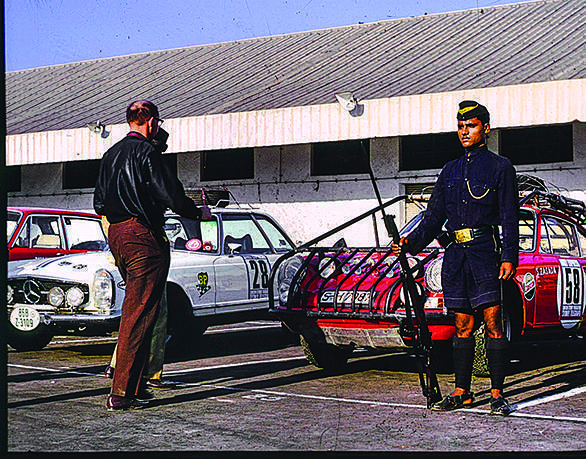 Very rare photo of Zasada's Porsche being guarded in Bombay, in 1968, by a policeman holding a Lee Enfield rifle fitted with a bayonet

With huge crowds cheering them on, the participants reached Bombay early in the morning on the 1st of December, 1968. A major part of the excitement for Indian spectators was that one of the cars was an Indian entry. Yes, car number 81, a Ford Lotus Cortina, was driven by Dr. Bomsi Wadia and his teammates, K. Tarmaster and Farokh Kaka. Though Dr. Bomsi Wadia had "dropped out" just before the Khyber Pass due to mechanical issues, he and his teammates were still following the rally, and proudly flew the Indian tricolor all the way to Bombay, where they sadly had to "miss the boat to Sydney." 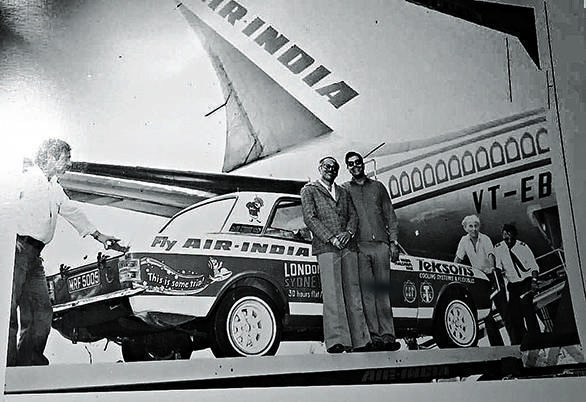 Dr. Bomsi Wadia with his Ford Cortina and co-driver Suresh Naik, alongside the Air India plane that took them to London

When the cars were shipped out of Bombay, on 5 December 1968, the Ford Lotus Cortina of Roger Clark and Ove Andersson was in the lead. In sixth place was the Hillman Hunter of eventual winner Andrew Cowan. The four days of short stages in Australia  from the 14th to the 18th of December  changed the overall standings, with Cowan winning the first London to Sydney Marathon in his Hillman Hunter. Polish ace Sobieslaw Zasada who also took part in the inaugural event finished fourth, missing the podium by a minute. Paddy Hopkirk in a BMC 1800 was second and Australian Ian Vaughan was third in a Ford Falcon. 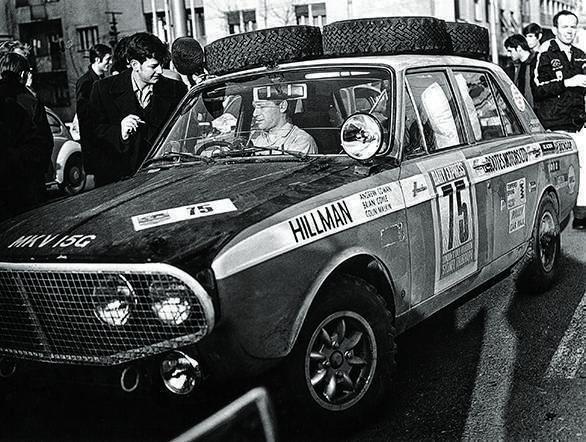 Andrew Cowan won the 1968 event in this Hillman Hunter.

Of the 98 teams that took off from London, 71 reached Bombay and 65 reached the finish line in Sydney after covering about 17,000km. Several of the drivers were famous rally stars like Paddy Hopkirk, Rauno Alatonen, Roger Clark, Simo Lampinen, Innes Ireland, Giancarlo Baghetti, Sobieslaw Zasada, and so on. While the most popular car for participants was the Ford Cortina, there were also BMC 1800s, Hillman Hunters, several Volvos, Mercedes-Benzes, Saabs, Porsche 911s, BMWs, Citroens, Vauxhalls, Moskvitchs, Simcas, etc 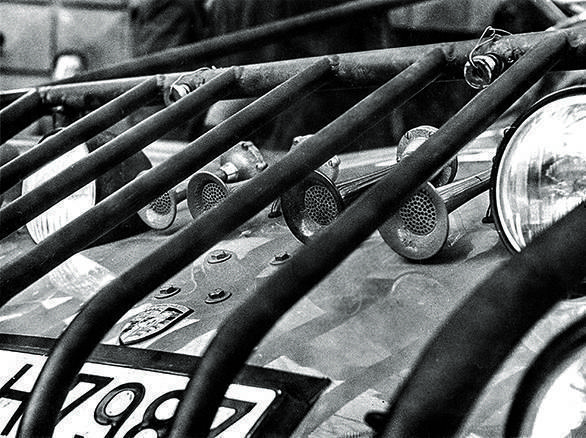 Nine years after the great success of the first London-Sydney Marathon, Australian advertising publicist Wylton Dickson decided to organise another such marathon in 1977, once again from London to Sydney, but this time shipping the cars from Madras to Malaysia. After driving through Malaysia and Singapore, they were then shipped to Australia. The total distance this time was 30,000km.

In this second edition of the 1977 London to Sydney, 68 cars took the start on 14 August 1977, and again amongst them was an Indian, the very same Dr Bomsi Wadia, from Bombay. He was back to participate in the same car he had driven in the 1968 event, the Ford Lotus Cortina. While the car was the same, Bomsi Wadia's co-drivers this time were Suresh Naik and Adi Malgham, both well- known car tuners. Interestingly, Dr. Bomsi Wadia's Ford Cortina is the only car in the world to have participated in both the1968 and the 1977 edition of the London to Sydney. 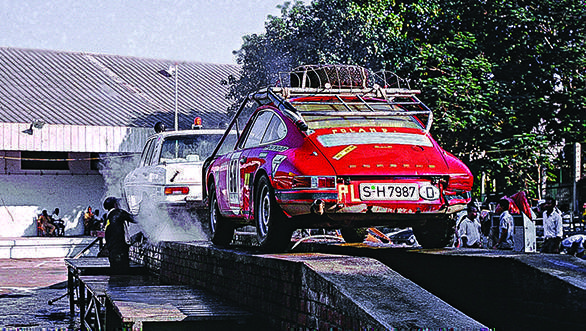 Zasada's Porsche being washed in Bombay before being shipped to Australia.

The winner of the first London-Sydney held in 1968 Andrew Cowan was back too, this time behind the wheel of a Mercedes-Benz 280 E. Several other veterans of the first marathon were also participating again, including Paddy Hopkirk, Giancarlo Baghetti and of course Polish rallying ace Sobieslaw Zasada. Newer stars such as Australian Ross Dunkerton (Asia-Pacific Rally Champion in 1991 and 1992), French female rally star Marianne Hoepfner, Englishman Philip Young and German ace Joachim Warmbold (navigated by Jean Todt) were also in the starting line-up. What is really fascinating is that subsequently all of them developed a connection with India. 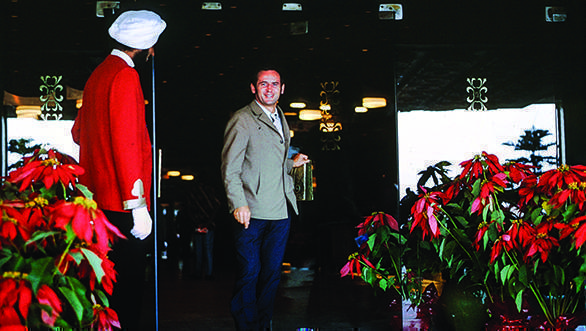 Zasada at the Taj Hotel

The inaugural Himalayan Rally was held in 1980 and Marianne Hoepfner finished second in it driving a Toyota Celica. Joachim Warmbold also participated but was a DNF (Did Not Finish). Philip Young entered in a 1967 Morris Minor he had borrowed from the Archbishop of Canterbury! He finished the event in a most impressive tenth place overall and at the prize distribution ceremony, even attempted to kiss the then Prime Minister Indira Gandhi's hand, only to be stopped by her bodyguards. 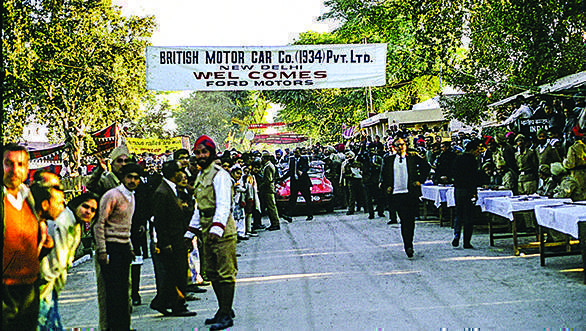 Participants being welcomed in Delhi during the 1968 event.

Philip came back for several more Himalayans, usually in a classic car (read more about him on the OVERDRIVE website). Ross Dunkerton also competed in several Himalayans and finished second overall in 1985 and 1986. Jean Todt (former head of the Ferrari F1 Team and present President of the FIA) has also come several times to India as a judge for the Cartier Concourse d'Elegance vintage and classic car event. What is also remarkable is that the late Mark Shand, who conceived the Cartier Concourse d'Elegance (and helped organise it along with Manvendra Singh Barwani), also took part in the 1977 London to Sydney event in a Peugeot 504, and finished a very creditable 25th overall. 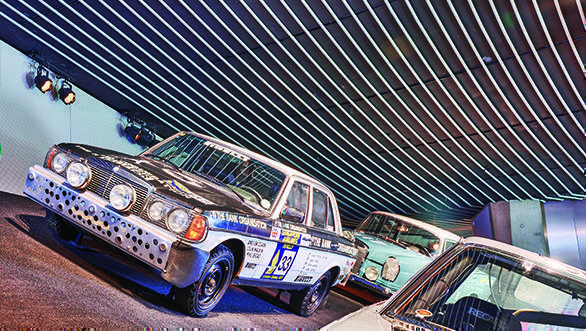 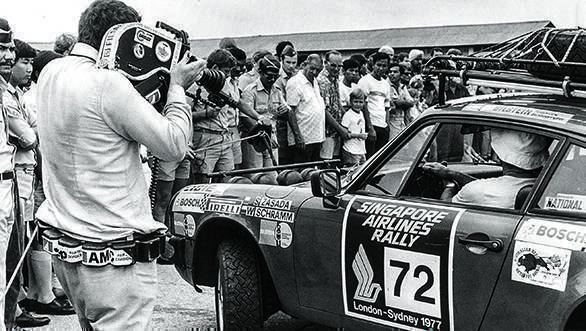 In fact, Mark fell completely in love with India and some years later even purchased an elephant from an animal fair in Bihar, and rode it around India and came out with the bestseller "Travels on my Elephant."
In a conversation with Bob Rupani a few years back, Mark in a fondly reminiscent mood said, "I still remember the reception we got when we drove into Bombay in 1977. The entire stretch of Marine Drive was lined with people showering us with flowers and cheering us on. Bob, I fell in love with your country and its people that day and ever since I have had a richly rewarding relation with India". Sadly, this true friend of India passed away way too soon. 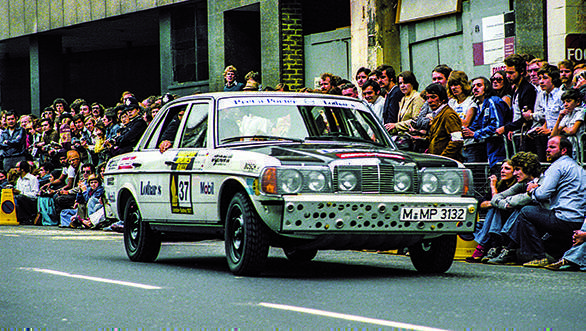 Delhi to Bombay in less than 12 hours

How the London to Sydney changed my life