A week with the TVS iQube

Considering the drastic climate changes were experiencing and the almost criminal pricing of fuel that continues to shoot through the roof (a litre of petrol costs Rs 107, in Mumbai), the adoption of electric scooters can be seen as a much called-for eco-friendly and economical approach to going about one's daily business. They're meant to save you from burning a hole in your wallet and can also be seen as that one little step that you can take towards a brighter, sustainable future. Ride electric, save money, save the world! And considering the amount of saving that comes with electric scooters, they really ought to be recognised as unsung modern-day superheroes. The TVS iQube electric is the superhero that TVS Motors feels we can rely on. But as we've come to learn, if there's one thing that all superheroes have in common, it's that they all have a certain weakness. Now, we've ridden the TVS iQube electric around Mumbai for a week to pinpoint its strengths and weakness and see if it is in fact the hero that we city folk deserve. 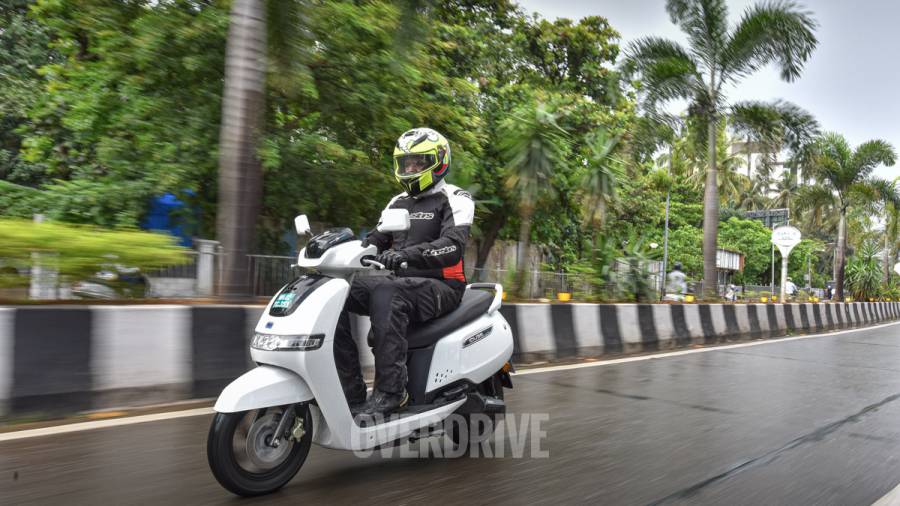 By the looks of things:

Beginning with the iQube's looks  pretty much nothing has changed with the electric since it launched last year, but this is the first time I've seen the scooter on road, and I must say that even with all its flat panels, it looks a lot better in the flesh than it does in the photos. Looks are subjective topic but I quite fancy it. The iQube has the silhouette and shape of a conventional ICE scooter, just that the all-LED lighting add a quirky futuristic touch. Out on the street some attentive people do take notice. 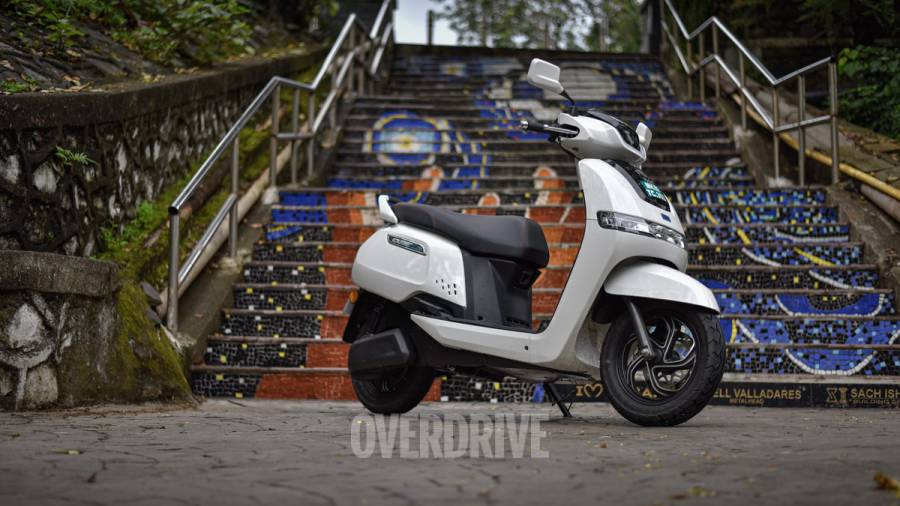 Out in the real world:

The TVS iQube is the one of the stealthiest and quickest electric scooters we've ever come across. It's practically a ninja on two wheels. When you turn the key in the ignition, there is an annoying water purifier-like welcome note that emanates from within the display, and once you select the ride mode, there's an audible cue that tells you that it has been selected, but after that, the scooter just stands there like nothing happened. Roll the throttle and the iQube will whisk you away briskly without so much as a peep, like you're on some kind of magic carpet. There is some whirring from the motor as you pick up the pace and even the regenerative braking system kicks in once you roll off the throttle. It's still not intrusive or audibly indicative to others around. Every time I got astride, I had to be weary of animals, motorists and pedestrians who aren't trained to look both ways before changing direction. They definitely won't hear you coming, and in all likelihood will not know you're even there. So I had to drop anchor instantly on some occasions, and thankfully, the iQube responded very well. 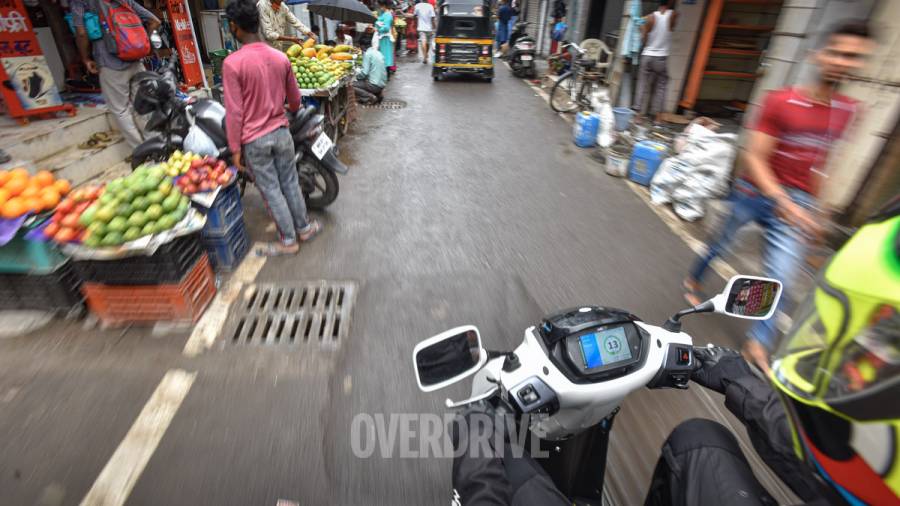 The TVS iQube electric comes with two modes Eco and Power, which basically serve as limiters to the scooter's speed and alter the scooters power delivery. Eco is the mode you'll want to be in to get the best mileage out of this EV, so a visit to my favourite in-laws house which is around 30km away was just about manageable. Now not a lot of people I pay visits to on a frequent basis have a 5A charging socket in their building, including my wife's parents, which opened my eyes to the fact that electric scooters without removable batteries will just make you all the more calculative of your relatively long trips. Now this isn't a bad thing if you're just going to hop about town on the TVS iQube . But here, I had to factor in that my destination was 30km away, so I'd have to cover roughly the same distance on the way back without charging the TVS iQube . 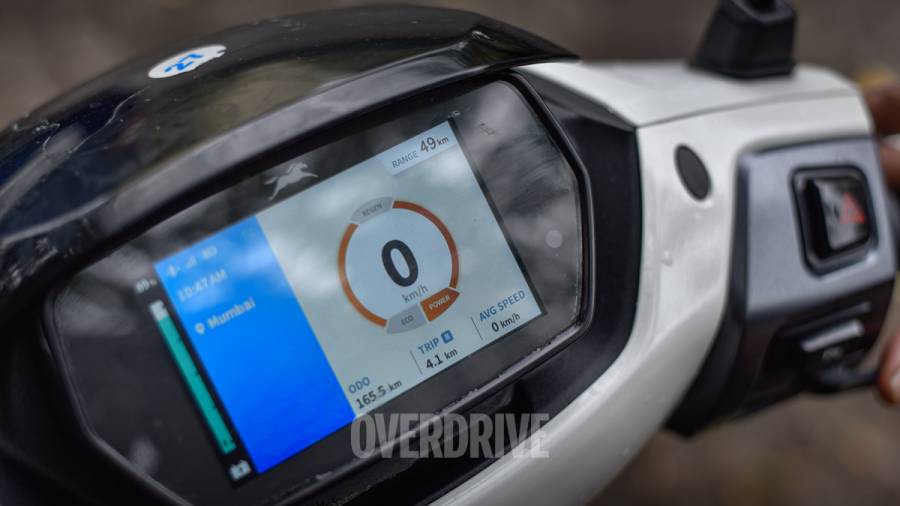 Power mode is when you want to get to where you need to be fast, but I noticed that this almost halves the range. Now this wasn't a real problem as I mostly shifted on to power mode on quick runs to the market which is around 3 clicks away from my HQ. With the battery topped up, TVS claims that the scooter will be good to go for around 75km at best in Eco, while being limited to a speed of 45kmph. There appears to be much truth to this claim in the real world, because I managed to cover an indicated 71km with a pillion and the scooter still had 13% of juice left. An average speed of 24kmph, I wasn't riding overly conservative but mostly used the regenerative braking system to reduce speed in traffic. The iQube definitely feels quicker than most of the ICE motored scooters out in the market right now and in Eco, I couldn't breach the indicated 48kph mark. In this mode, getting past traffic that's travelling at 40kmph will be a bit of a task. I only had to switch to Power mode to leap ahead of slower vehicles quickly and saw and indicated top speed of 78kmph light up on the scooters TFT colour display. The rapid drop in the charge percentage was a bit of alarming though as I hadn't calculated the ride distance this time around. 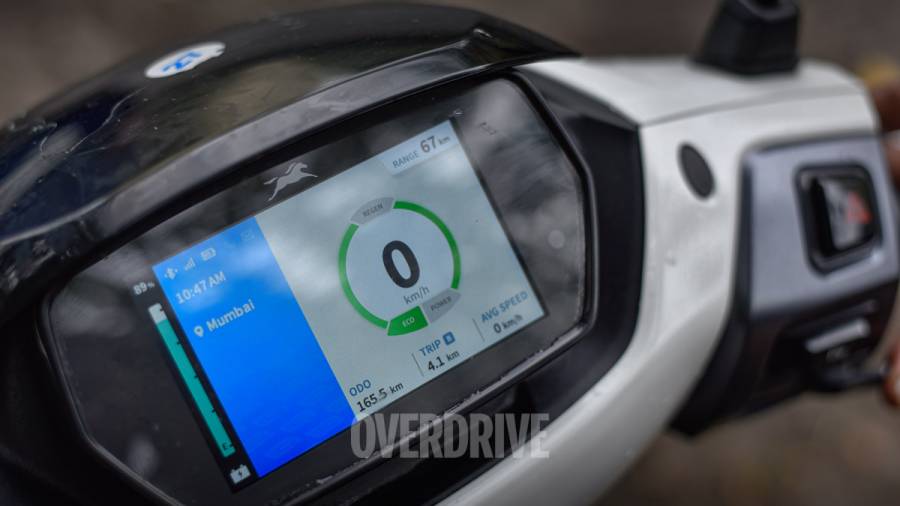 One thing that I noticed about the iQube is that inconsiderate of the ride mode selected, was that the battery doesn't go into limp mode, or an energy saving mode of sorts. It allows you to go about your business as you normally would, just that when the charge bar turns red below 15-per cent, that's when anxiety levels really shot up.

The TVS electric does decently well on ascents and descents as well. There's always a good amount of zippiness going uphill and you can just get of the throttle going downhill, and let the regenerative braking system do its thing and maintain a decent speed without sending you barreling down the hill. 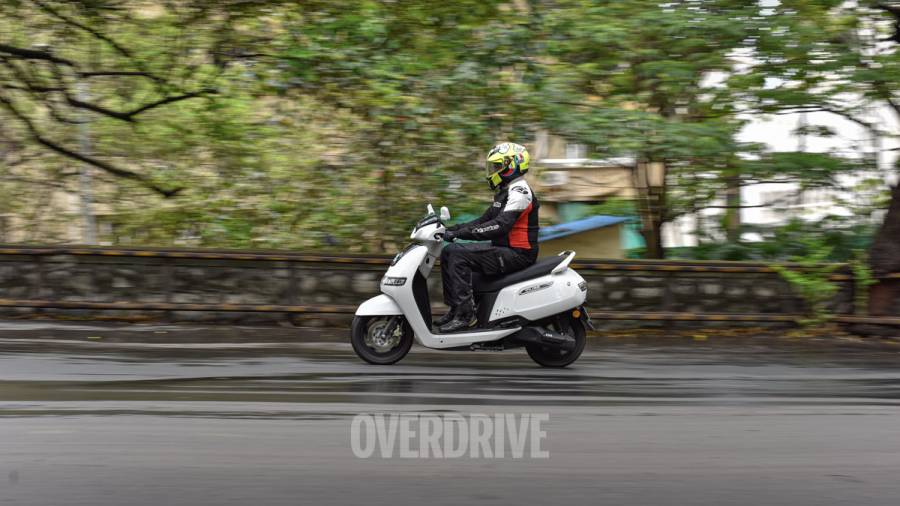 The iQube proved to be a brilliant ride at all speeds. Its suspension is set up for comfort and the ride is real plush at all speeds. I found the seat to be accommodating and comfy while whizzing around town over a relatively long test on the electric. Also, what surprised me was that my better half didn't complain about the seat at all after we spent over an hour and-a-half riding, which doesn't happen very often.

On the downside, the only major inconvenience I faced with the iQube was when it came to its charging. 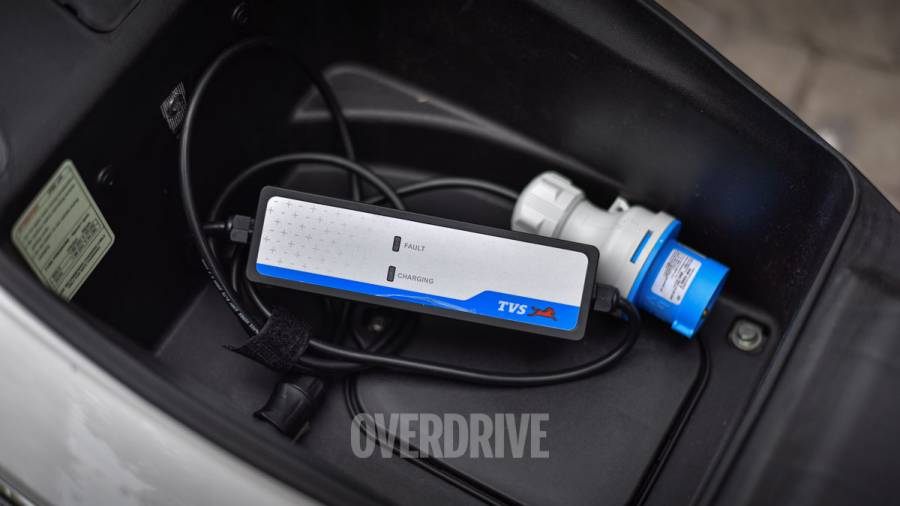 Now I must admit that charging the iQube over the course of this test, I was a bit inconvenienced. You see, TVS recommends that you charge the iQube via the company's own SmartXHome home charging unit which keeps the battery safe from any power irregularities or fluctuations. Which is all well and good. But this unit can only be setup at an enclosed parking space  something the building I reside in doesn't have. So the home charging station wasn't an option. The only other option would be to use the charging cable with the additional three-pin plug adapter provided that I had a 5A socket nearby. Something else my building didn't have. Now the cables aren't long enough reach my house on the third floor so as inconvenient as that process may have been, it wasn't an option either. 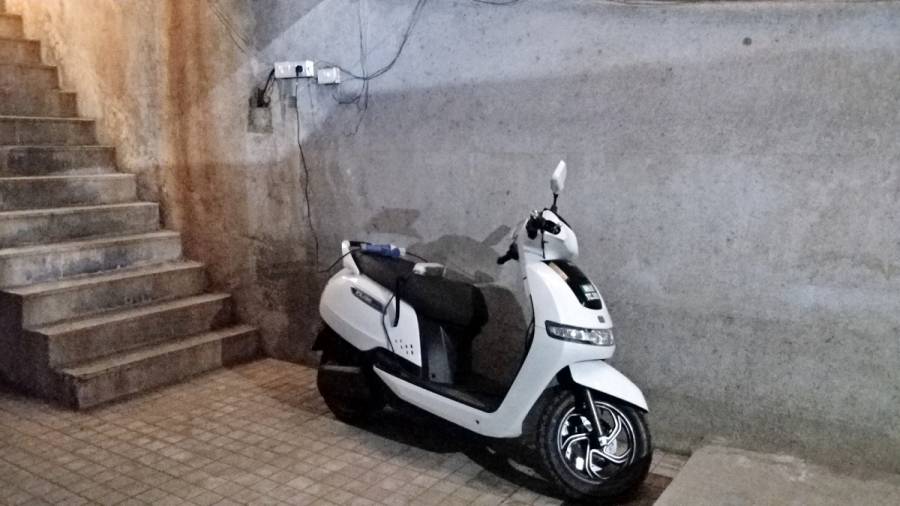 I eventually landed up charging the scooter at a friend's basement parking lot, which proved to be ideal. That was, until I learned that the iQubes display doesn't go off when the scooters' charging and the fact that the cables don't lock on to the scooter while its hooked up, so in addition to attracting some unwanted attention, someone could just walk off with the charging cables if the setting as right. And the cables don't really come cheap. So, in owning this scooter, you might face certain issues if your residence doesn't have a dedicated parking spot with an industrial or 5A socket nearby or a secure parking facility for that matter.

When it comes to charging time, we found the iQube to charges at the rate of 8% every half hour, and the TVS electric, like many other high-end electric scoots doesn't have fast charging capability and a removable batteries as of now. Some EV manufacturers will tell you that not having features like these help maintain a healthy battery for a longer duration, and obviously we'd tend to agree because, who in their right mind would want to shell out for an additional battery soon, which could cause a hole in your wallet the size a cat could jump through. It's not just the iQube, it's scooters that come with this charging configuration that's the problem at the moment. It must also be mentioned that the EV charging infrastructure in Mumbai is pathetic at the moment, and that too had a big part to play in this conundrum. 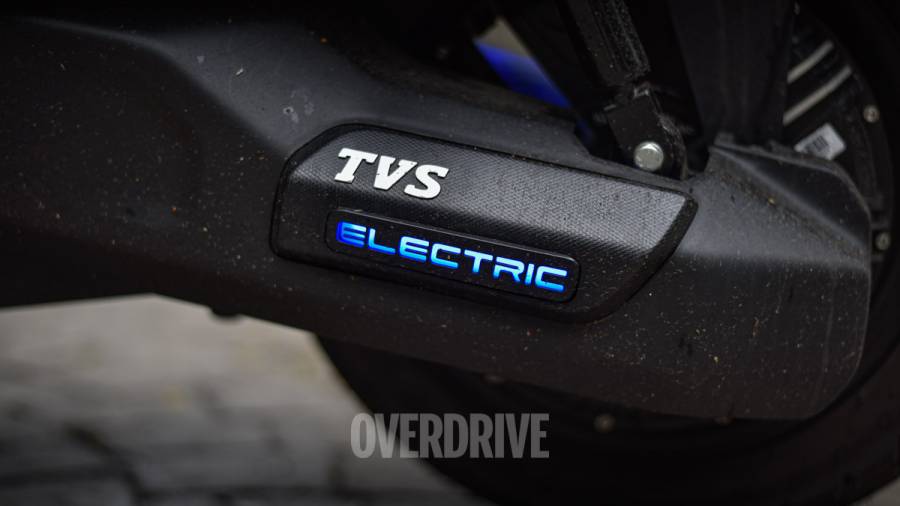 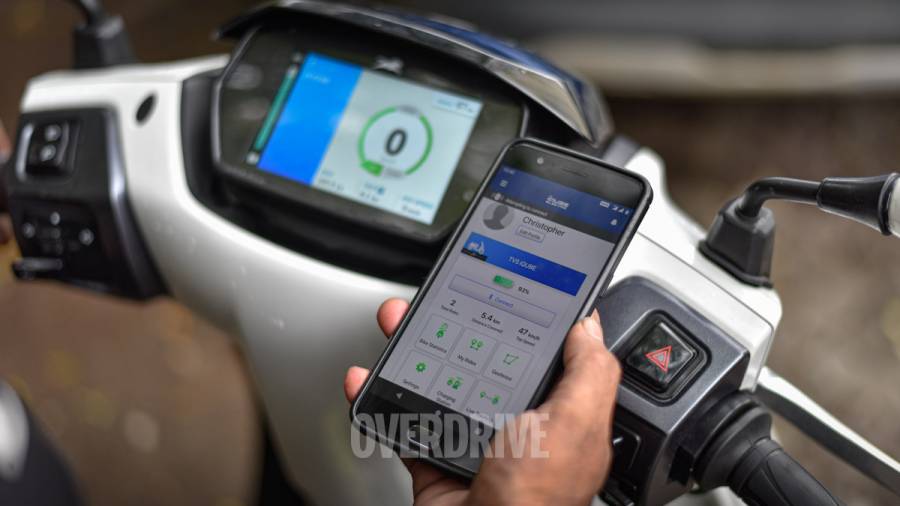 TFT display that's not a touch screen but it's not something to really cry foul about, the Q-park assist makes reversing a little easier if you've parked at an odd angle or on a slight decline. Regenerative Braking is a common feature with most electric models and with this scooter, helps in the reduction of speed to a great extent. The iQube also comes with an in-built sim which you can pair you're your smartphone. This grants you access to a host of useful data that you can access remotely of which the most useful are the ride statistics, charging status and geo-fencing. You also have the option of navigation assist but the mapping system is only capable of locating some notable landmarks like hospitals and gardens. When I tried to navigate to a friend's building in a relatively unknown part of town, the map couldn't locate the address and I couldn't even mark the building as a destination point, which was a downer. Also, to avail of all these services, including the live tracking data and geo-fencing alerts, you'll have to shell out an annual subscription of Rs 900 for the Advanced Pack. With the basic pack you will only receive information on your phones signal and battery status along with incoming caller and message notifications. 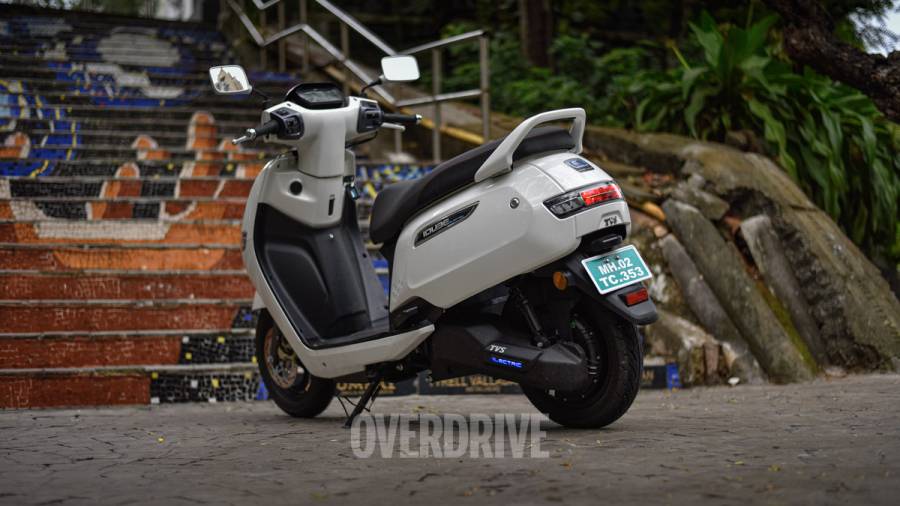 All in all, the TVS iQube is a superhero which can save you from going insane with running costs. It's a valiant electric scooter to have at your disposal if you're just going to use the scoot to run errands around town or your office is about 30km away from your home. But at this point in time, you have the right parking/charging facilities at your disposal to be completely satisfied while owning one. Currently, as far as electric scooters like the iQube are concerned, power comes with great responsibility and sacrifice. As of now, the method of charging is it's only its weakness. Now the iQube has is available in just a handful of cities  Bangalore, Chennai, Coimbatore, Delhi and Pune (where it recently launched at the price of 1.11 lakh on road), and it isn't on the menu for Mumbai as yet. Still, just as soon as the EV charging infrastructure of cities like Mumbai improve, so will the prospect of owning scooters like the TVS iQube . 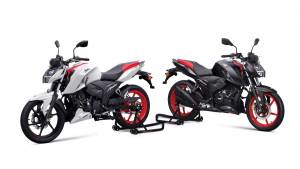 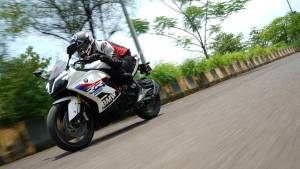 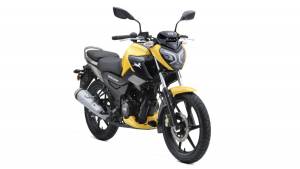