A day at the office: the 2013 Porsche Cayman S driven

The Cayman S is one of Porsches finest. It's based on the Boxster but is much sharper and focused. Now I am not going to delve in to all the intricacies of the Cayman S, this link here will tell you all that you need to know. All I want to talk about is how the Cayman S felt being driven our roads. 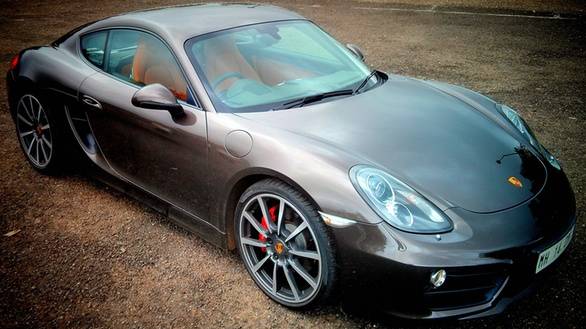 To do that I am going to use Ankit, my colleague from CNBC who hosts Tech Guru and Switch On, as reference. After all, he is of a stock of enthusiasts that swoons over anything with curves and sounds like the pearly gates opening. Ankit also loves numbers so the minute I start tossing specifications at him, I can see his glasses mist over. Yup, he can feel the heat! But Ankit brings a unique innocence to the whole equation because he, like a million others, has never been in a sports car. So to him, the simple task of getting into and out of the Cayman S felt arthritic. And that led to a joke about an irony of life  unfortunate as it might seem, a significant percentage of the Cayman-purchasing audience are rich old men probably suffering from arthritis. The hilarity of the situation continued  the instant I fired up the engine, a dozen people flipped open their umbrellas. Sorry guys, this isn't thunder followed by a deluge, its just the Cayman S firing up its six cylinders.

Ankit used to be a RJ too not too long ago so his motormouth is understandable, but for once he was left speechless. Though I must also add that this was the first time I saw Ankit with his mouth open wider than his spectacles, but not a word escaped those lips. The Cayman S can do that to you.

The Cayman S can also do a 100kmph in 4.9 seconds. With the optional Sport Chrono package this particular Cayman S came equipped with, it can do it 0.2 seconds quicker. It's a deal-maker and Porsche India would probably benefit from opening up a dealership at the mouth of the Mumbai-Pune expressway. "Want a demo of the Cayman S sir? Let's go for a drive up to the toll booth", you'd probably write a cheque 0.2 second quicker than the Sports Chrono package. 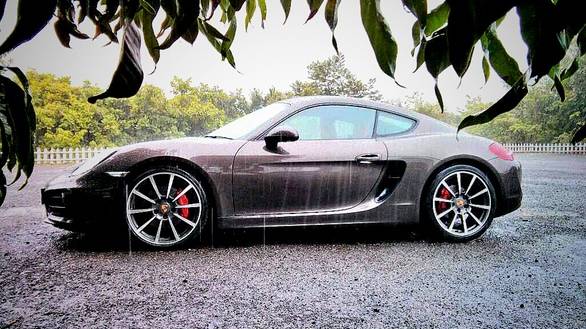 Streaked with rain and muck, the Cayman is still arresting

What was most interesting to me, however, was that through all of this  the hard acceleration, the glorious sounds, the even harder braking, Ankit was absolutely averse to the ride quality of the Cayman S. To me, the Cayman S is a reasonably stiff car even in comfort mode, yet the ride quality was plush. In the sense that you would never feel a bump. High-speed damping is exemplary and at urban speeds you'd crawl gently over potholes in any low slung sportscar. It's only when you shift to Sport Plus mode that the ride gets incredibly stiff. In that mode however, the ride quality is the last thing on your mind. In the Cayman S you begin to marvel at the ferocity with which the 325 horses spin the rear wheels. The flat-six roar when pedal meets floor is so incredibly audacious that it had techno geek Ankit reach for the volume button on the optional Bose surround sound system to turn it down to naught. As he perfectly described it, "with an engine note like that, its all the music you will ever need".

The climb up to Amby Valley was epic, punctuated by monsoon revellers hooning the Cayman S as it passed. I've come up here enough times with enough cars of all sorts to know that none have got the sort of admiring glances or catcalls like the Cayman S did, especially from the fairer sex. Axe effect, what's that?

So there it was  a middle of the week working day shooting a car gorgeous in every respect, turned spectacular. Ankit and I had a perfect day at the office, then. Guess Porsche did get it right; the Cayman S is definitely the car to drive to work! 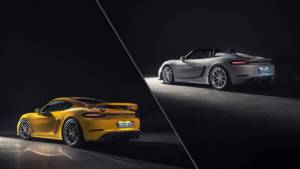