How do you deal with change? It's one of life's biggest questions, to which everyone will have a different answer. You could look at a situation and react to it entirely differently than the next person, and be at least somewhat right. But before we find ourselves deep in this self-help wormhole, let's segue into the world of motorsport. This sporting discipline is constantly changing, riding on the back of the individual, and team, grit, innovation and just a straightforward will to succeed. 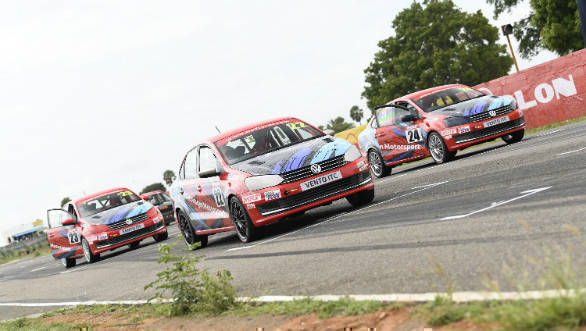 Walking through the pits at the first round of this year's MRF FMSCI National Racing Championship, I couldn't shake off this lingering thought at the back of my head. It all seemed familiar but something seems to have changed. At the centre of all this is the Indian Touring car category and the three entrants that Volkswagen Motorsport is fielding in this category.
Karthik Tharani, Dhruv Mohite and Ishaan Dodhiwala are driving the new Volkswagen Vento ITC cars. These cars debuted last year as the Vento TC4As in the new Turbo Class, but that has now been absorbed into the main grid, as the regulations have seen a quite a big overhaul.
Team-based racing is a standard fixture in on-track racing for us in India, but what sets this outfit out is that this is the first factory-backed team on the main ITC grid, and all their three drivers have won championships before this. 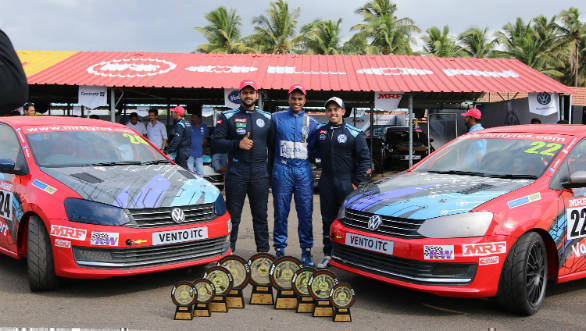 At this point, you might wonder if previous accomplishments are a guarantee that these drivers will be the best choice for VW's campaign here. But Tharani's response to this, he won the Formula JK last year and also helped develop the new Vento, makes a valid case, "As you keep racing, year on year, whether you win or lose, you keep levelling up. And learning from the previous year. For sure, from last year I've learnt a few valuable lessons, in terms of how you go about in a championship. The championship looked very difficult. But then it teaches you not to give up and keep focusing on what you have to do. So, in terms of lessons learnt, my last win was massive. It's not over till the last lap. It also feels nice. It's a good thing to have on the CV, but you still need to work hard to get sponsorship. That's the real decider on whether you move up the ladder." And Volkswagen's campaign in the ITC is not just about winning. It's about progress. Team boss, Sirish Vissa, has made it clear that they're competing in this championship as the only manufacturer to eventually be in a situation where enough people are running Volkswagen for them to be able to take a back-seat role as a supplier and not a competitor. They want other manufacturers to come in, but right now their focus is to see that the sport grows.

The decision to put Mohite in one of their Ventos backs this claim. He won the Ameo Cup last year, which promised him a VW sponsored drive in a championship for 2019. Mohite's expectations from this season of saloon car racing bring some new perspective to what the ITC class can become for a future crop of racers. He says, "When VW offered me this seat, it was sort of like a jackpot for me. ITC is the most reputed category of racing in India. It's been running for years and you have so many legends competing parallelly. The kind of exposure we get and the kind of technical involvement that we have as factory drivers, as a young racer is quite extraordinary. I haven't had a lot of input into my race cars after my karting days, so it's especially great for me. In September, I'm going to South Africa for my international race. When I go there, I at least know how cars work and I can have some positive input to give there." The theme of progress and change recurs in on-track racing as well. Arjun Balu from Race Concepts has 25 years of racing experience, that's about as old as the VW drivers are. This skill shows how honest he kept them in the first round. The Volkswagen drivers took seven of the nine podiums over the weekend, but that's only part of the story. In the third race, he was only a second behind over the course of the entire race, in a car that's been redeveloped entirely to be competitive in the new era. This is expected to get even closer in the next round in Chennai, where Balu has traditionally been very strong. 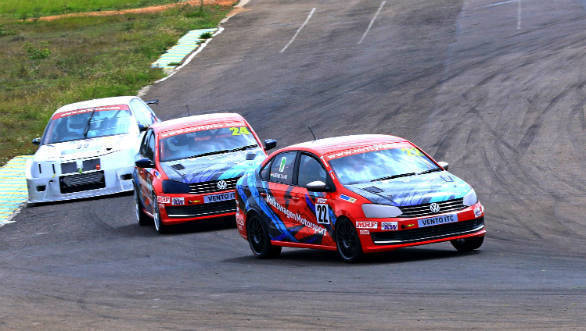 Now suddenly, the ITC has the most amount of contrast on the grid, be it in terms of drivers or machinery. You have the light, powerful, naturally aspirated Esteems and Cities, right up to the cutting edge, heavier, turbo-charged Ventos. Driving these are stalwarts of the Indian racing scene like 77-year old D Vidyaprakash to 21-year olds upstarts like Mohite. A situation set up for friction then, if you had to take a pessimist's view. But that isn't the case thankfully. Dodhiwala, who comes from a family of racers and has come up through the VW ranks thinks it makes the racing quite heartening," Coming from driving the Polo one-make series earlier and even the Formula 1600s, the cars here are all different. This changes the overall dynamics of how you race each other here. The other aspect is driving against legends like Arjun Balu, Leela Krishna and D Vidyaprakash, there is a fair amount of respect that comes in from one angle. But on the other hand, just because you respect them doesn't mean you're going to give them too much space on the track. So there is the balance to be held, being able to face fair but also not making silly mistakes or not making a move you would regret later. But overall, the racing in ITC is a little bit of both, driving aggressively when you can but at the same time being able to make that switch. It's a very different experience here, I experienced it a bit last year with the Turbo Class and learned from it. The driver's here race very hard and know how to use the track to their advantage, especially in Coimbatore. At the end of the day, we are racing drivers and we do what we can to win". 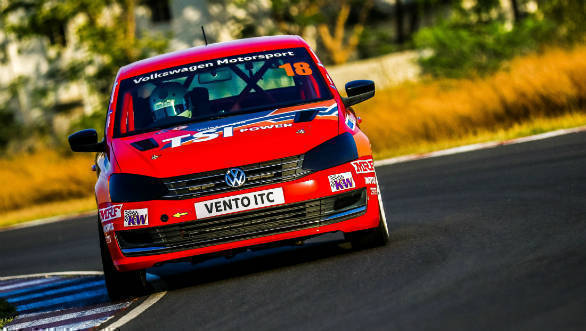 All of this points to the ITC being rejuvenated into something of a motorsport perfect recipe. The round at Kari showed us that it is possible, but there are issues. The new regulations have been a long time coming and immediately make a large part of the grid look obsolete. The grid was already smaller than last year because of this, which doesn't rule out some kind of unhappiness over the rule, causing the authorities to make them less comprehensive. The lack of highly well-funded outfits like Volkswagen Motorsport is another concern, which could make the consistent VW wins very monotonous, very soon.

What can't be doubted is that we are at some juncture in Indian motorsport, as far as the ITC is concerned. You have quick cars and a great talent pool of drivers coming in, and some existing teams making conscious efforts at challenging them. All three of the Volkswagen drivers have hopes of making it big internationally in GT racing, and all of them think this gig is a big positive towards that goal. A good way for changes to start happening, in my book at least.