2016 MotoGP Catalunya: Notes from the paddock

We're trackside at Catalunya, where the atmosphere is subdued due to the nature of events that transpired yesterday. However, the racing continues at the request of the Salom family. Here's what we observed on the Saturday of the CatalanGP:

Vale all the way
Valentino Rossi is a phenomenon. The way his colours dominate the audiences is probably not good for MotoGP. Because when he retires there will surely be a drop in viewership until things stabilise. But I've met him and I know that as shrewd as he is and as marketing-savvy as he is, there is a genuine fondness for racing and an honest man in Valentino Rossi. It makes him approachable and human, and I suspect that's why so many of us are so firmly in his corner. Here Rossi was the only rider to acknowledge the crowd with a wheelie at the end of qualifying. Most just roared by. The crowd clapped politely for every rider as they passed. For Rossi, they also cheered.

Racing and the Reaper
Death and motorcycles go together. It's an unfortunate pairing and one that technology, law and manufacturers have tried ever harder to break up. We were out for a walk in Barcelona looking for motorcycle gear shops when the news of Luis Salom's passing reached us. It made us sad. The next day, today, the paddock was alive with action and an innocent bystander would be hard pressed to notice the silence and somber mood in the paddock. But then the Aprilia riders walked into the Michelin hospitality. Stefan Bradl said, "It's hard to find motivation and go on in times like this. But we go on out of respect for the Salom family, they want it to be like this." Luis Salom's death brings to light, once again, just how cruel the sport we all love can sometimes be

Death is real and you cannot negotiate with it. The racers live a life they've chosen right on the edge. Let us be deeply grateful that death doesn't come often to the racetrack. Rather than forget that it exists.

Sound effects
It's unfortunate that television broadcasts of MotoGP don't have a 'no commentary, only ambient sound' mode. Because the real thing is heart-wrenchingly violent to listen too. I obstinately persisted in not using the supplied earplugs but the fingers went deep into the ears when more than two MotoGP bikes thundered down the straight. One MotoGP bike is loud enough. When they come down the main straight one after the other though...

But the Aprilia is special. It's the only bike that you feel in your solar plexus as a deep throb. All of them make incredible sounds and if I had to come to MotoGP only to listen to the bikes, I wouldn't hesitate even the slightest bit.

Paddock pass
The Paddock is the lane behind the pit building. It's a relatively relaxed affair on Saturday. You'll see the racers hanging around, but not the superstars. The paddock - the place where the racers, the mechanics and the autograph hunters all collide

The umbrella girls will be there for selfies and to hand out rider posters. The hospitality units are full and you have this sense of a giant machine slowly winding up tighter and tighter before it unleashes all that energy in a Sunday crescendo.

Child's play
They're just kids! The Moto3 class is full of young racers who are just kids when the leathers come off. From the trackside they're gods getting ready for prime time. But when you see them outside, in the hotel or lounging around while a promotional event gets underway, you see how young they are. 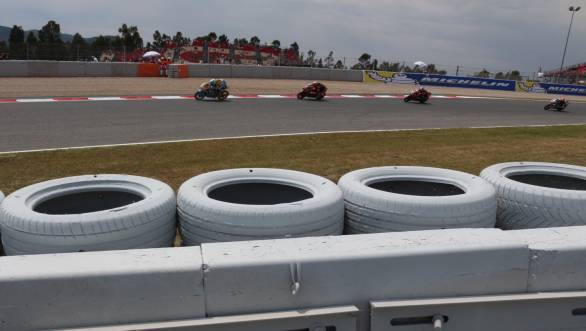 With their leathers on, the Moto3 riders are lean mean racing machines. It's only when the helmets come off that you realise they're kids

Makes me wish I had a lot more motorcycles in my youth in hindsight. And then you meet the senior racers and you see the difference. The same youthful energy and restlessness, but now tinged with a maturity that only comes with age and experience.

Speed is everything
Went for a garage visit and stood looking into the Suzuki MotoGP team garage during FP2. As Aleix Espargaro left the pits the mechanics decided to make a drastic change to his backup machine. Within minutes a team of three mechanics put up barriers, took off the fairing and suspension and went to work. 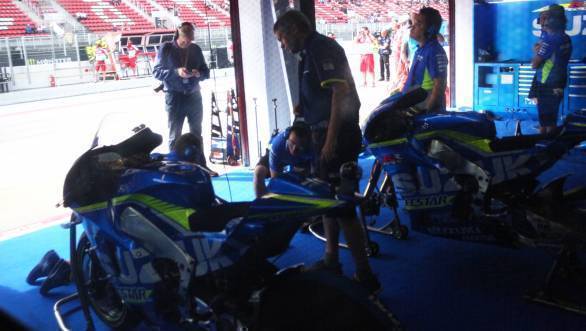 There's a mechanical, old-school fluidity to their moments and a visible precision that's deeply impressive. You could watch the world's top mechanics work on a motorcycles for hours and never tire of it. I obviously don't have pictures. As soon as the barriers went up, we had to lower our cameras. 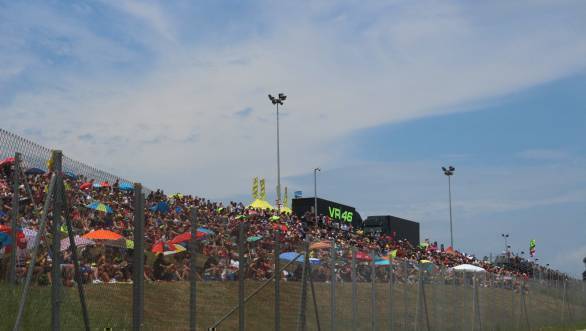 Packed grandstands and people sunning themselves - just another race weekend

A massive crowd turned up to see Saturday. That's practice and qualifying. Entire families with kids and parents. Many young couples. Tens of thousands of bikes. Makes you wonder what we have to do for the Indian public to have the same passion for this amazing sport.

Tyre talk
You cannot really sign off a race report without mentioning the tyres. Michelin has a huge learning curve in supplying tyres to the MotoGP. As many people told us - racers, technicians and Michelin officials - the challenge is to not let the level drop while working from a nearly complete lack of data. 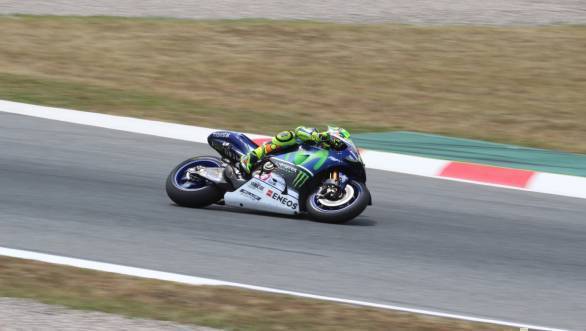 Today the data comes from testing with MotoGP, from the Endurance racing and many other sources. 1400 tyres arrive at each race event and form the only contact between motorcycle and tarmac. It's a big, big job.