Like all religious folk, automobile enthusiasts too have certain pilgrimages they hope to take someday  drive at the Nurburgring, watch the 24 hours of LeMans at the Circuit de la Sarthe, experience the Dakar, watch an F1 race at Monaco and of course, attend the Goodwood Festival of Speed. 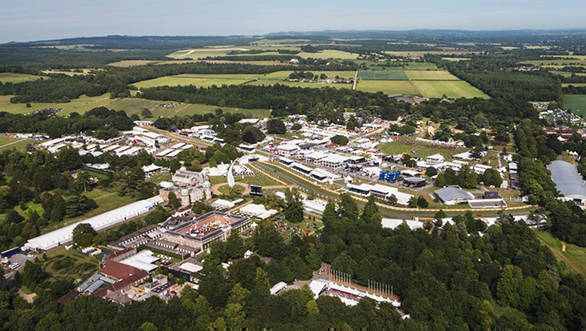 So why is it such a big deal then? Well, because it gives the average Joe, like you and me, a chance to get to the forefront of motorsport action, meet the legends and watch the unveiling of some of the newest cars in the industry. Every year, people from around the world, flock to the grounds of Lord March's Goodwood Estate, to gawk at the displays of some of the rarest vehicles, and also to watch some really fast drivers driving really fast cars up the Goodwood Hillclimb. The 2016 Goodwood Festival of Speed promises to be no different with its theme  Full throttle  the endless pursuit of power. 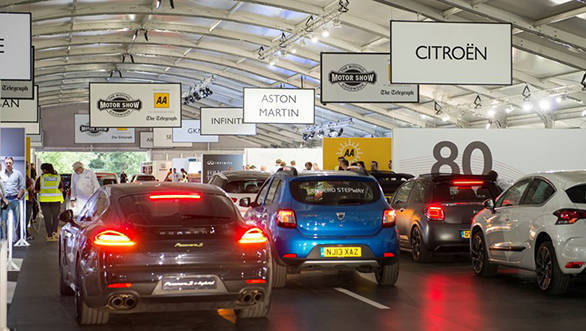 The Moving Motor Show provides an opportunity for manufacturers to showcase their products and also gives some guests the chance to get behind the wheel and take on the hill climb. The highlight of this event is that unlike other car shows, the cars are enjoyed the way they're supposed to be - on the tarmac. 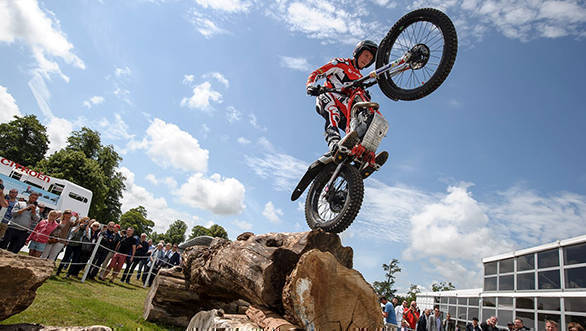 At the Goodwood Action Sports arena, you will find some of the best freestyle motocross, trials, BMX, and mountain bike riders performing stunts and having fun on the man-made playground. Once that's done, the aerobatic team, Red Arrows will be up in the sky performing their routine. 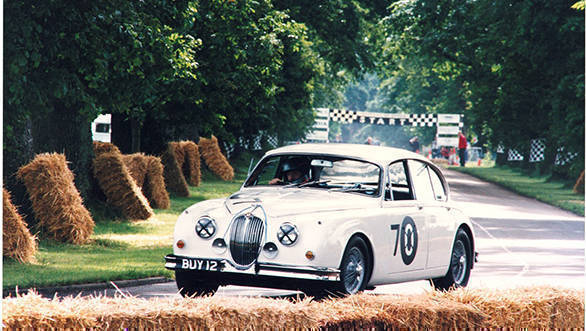 The hillclimb event, which starts on the second day, is the most iconic part of the event. The race to the top has several categories which include cars ranging from the pre-war era, up to modern supercars and racecars. Other categories include saloon, BTCC, rally, drift and NASCAR cars. The hillclimb is the one place that spectators will get to see old and modern racecars in their element, trying to set the fastest time in their class. On the final day of the event, 20 of the best drivers and riders from each class will go up against each other in the hillclimb. 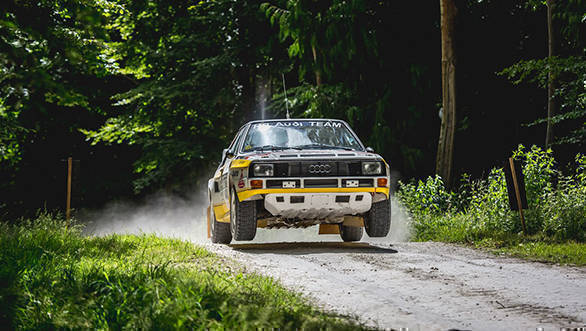 The Rally Stage is held through the network of woods where viewers can get up-close to the all rally action. They can witness iconic rally cars like the Audi Quattro, the Toyota Corolla and old Porsches kicking up dirt and going sideways just like in their heydays.

The Goodwood FoS is one place where you will find cars from every era in the same premises (a very large premises though). So to make things easy, here's a list of some of the rarer cars, both old and new, you'll see at the event. 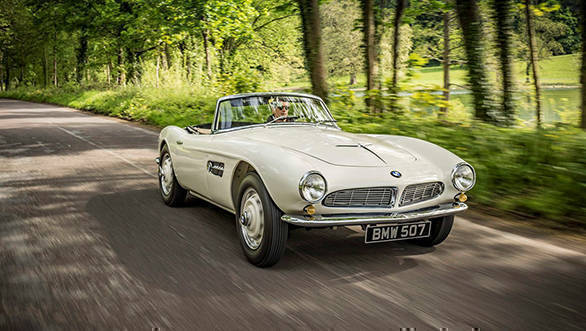 To kick things off, Lord March will drive his 1957 BMW 507, worth around one million pounds, up the Goodwood Hill to celebrate BMW's 100th year of existence. BMW themselves will be bringing a bunch of their cars of historic significance like the 1940 Mille Miglia winning 328 Superleggara, the 1983 Formula One World Championship winning Brabham-BMW BT52 and the BMW V12 LMR. 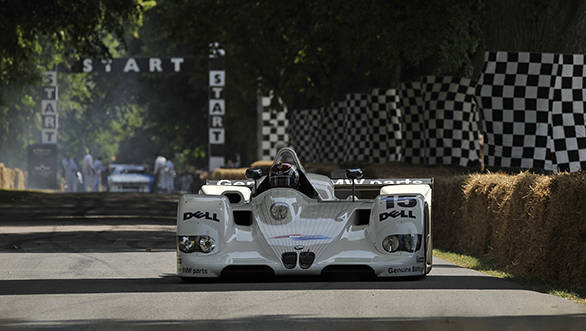 There is also the Cartier 'Style et Luxe' which will display some of the rarest cars from the 19th-century including the Vauxhall 30/98s, the first British production car to reach 100mph (160.9kmph), Rolls-Royce Phantom IIIs, the oldest-surviving Lambda in the world and even a 1959 Flaminia Sport Zagato.

The most exciting car that will make an appearance at the 2016 Goodwood FoS is the Bugatti Chiron. It will be the perfect car for the events "endless pursuit of power" theme, with its 1500PS/1600Nm quad-turbocharged 8.0-litre W16 engine. This could possibly be the quickest car to race up the hill. Unless of course, the McLaren P1 LM, which is technically a road-legal by P1 GTR, driven by 1999 Indy 500 winner Kenny Bräck, is the better car. Another McLaren that will be making its debut will be the 570S Sprint  a track-only version of the 570S. 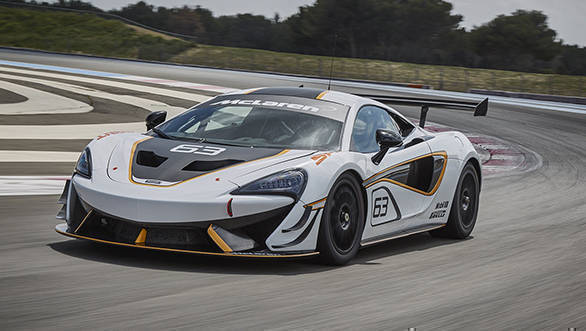 Meanwhile, Nissan will also have the 562PS 2017 GT-R raced up the hill while the 2017 NISMO version which puts out 592PS will be at their stand. Apparently, Nissan also has a couple of surprises for us and we can't wait to find out what they are! Another mad GT R at Goodwood will be from Mercedes-AMG. This car will make its world debut at the event and its twin-turbo V8 will put out 577PS, which could make it one of the fastest Mercs in production.

Also at the event will be a more environment-conscious car  the Tesla Model X. However, don't let the lack of a roaring V8 fool you. It has a Ludicrous mode which when engaged puts out 762PS and 967Nm, giving it a 0-100kmph time of 3.2 seconds!

The drivers and riders

The Goodwood Festival of Speed is the best chance you'll get at meeting some of the greatest motorsport drivers and riders, old and new. This year, you can expect to see legends like Giacomo Agostini, 15-time Motorcycle Grand Prix World Champion, riding an MV Agusta, Ken Block driving his Ford Fiesta RX43, Jenson Button driving the brand new Honda NSX and Lewis Hamilton and Nico Rosberg driving the Mercedes W05 Hybrid F1 cars. Also at the event will be Karun Chandhok, who was recently appointed as Williams F1's heritage driver, in the 1983 FW08C and the 1990 FW13B. 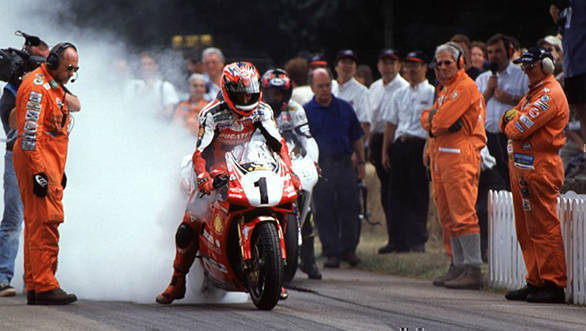 Carl Fogarty at a previous Goodwood Festival of Speed

Let's not forget Carl Fogarty, four-time World Superbike Champion, who will be returning to Goodwood after eight years.
There are whole lot of other drivers and riders, the list of which you can find here. 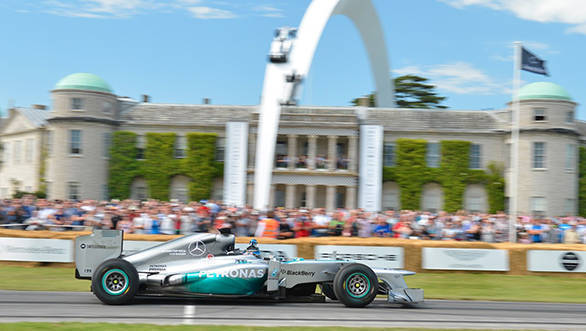 Apart from Mercedes, there will be six other F1 teams at Goodwood to take part in the hillclimb  Ferrari, Force India, McLaren, Red Bull, Renault and Williams. Fans will get almost unrestricted access to the Formula 1 cars and their drivers when they're not busy racing up the hill. 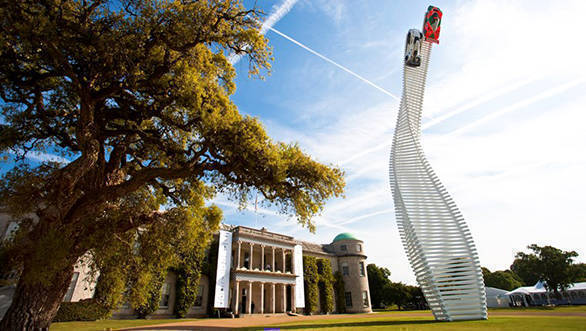 The Central Feature from 2015, which celebrates Mazda in motorsport

Since 1994 the Goodwood Festival of Speed has always had a central feature that commemorates something special in the automotive field. Since 1997, Gerry Judah has been entrusted with the task of designing and producing the central features. It has always been a symbolic representation that celebrates automotive design and heritage. This year, the central sculpture's marque will be BMW, which is celebrating 100 years of existence, and we can't wait to see what Judah has in store for us.

Where and when you can watch it 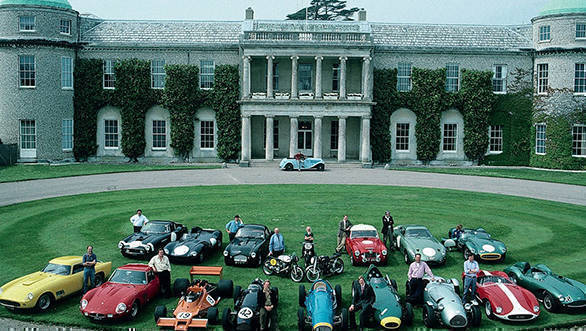 The Goodwood Festival of Speed is a four-day event and if, like me, you're not at the event itself, you can watch the live broadcast on their website www.goodwood.com. The stream goes live at 1.15pm IST tomorrow, June 23.