Things are always tricky at dusk. In the eerie orange half-light of neither here nor there, Murphy's Law seems all the more inevitable. And in endurance racing, it's dusk that is the witching hour. The hour when that tyre that's hanging on as best as it can, finally gives way. The hour when the blaze of lights against the orange sky plays tricks on the mind of the tired driver and helps him into the Armco. The time when engines finally give up the ghost. Oh, it's a very wicked hour indeed. 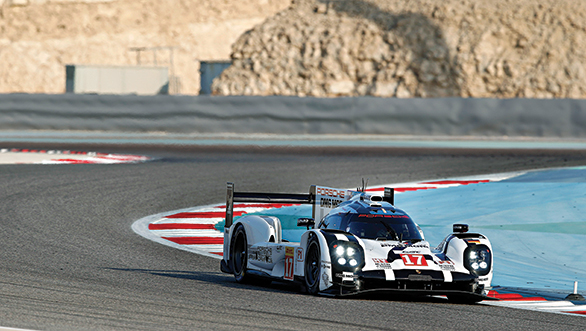 And it was in this time of twilight, the halfway point of the World Endurance Championship finale at Bahrain, that I saw the tension in the Porsche garage skyrocket. Timo Bernhard, in the No17 Porsche had just radioed the team that his car was losing power. Within a second the atmosphere in the garage changed. You see, the 919 Hybrid he was piloting had performed almost flawlessly through the entire season. And then, at the most critical stage, when it was the drivers' championship at stake, Murphy's Law was kicking in. What could go wrong, was going wrong. And with the depleting engine power, the hopes that Bernhard and his team-mates Brendon Hartley and Mark Webber had, of finally taking that coveted title, were also fading. 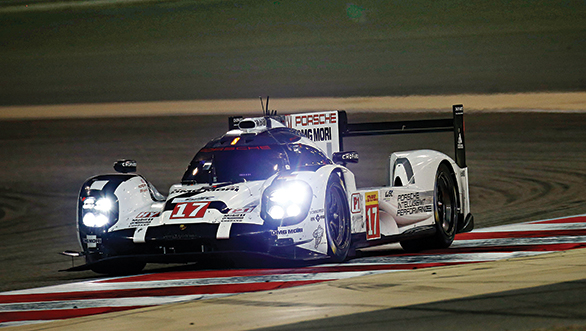 If there was one man who really wanted to be World Champion, it was Mark Webber. Ah, good old Aussie Grit. He'd been counting on the World Endurance Championship finale to finally grant him his long held wish for a title. He'd had years of being an almost-man in F1. Years of 'if only he had a better car', followed by years of 'if only his team-mate wasn't' This was his chance though. And going into the race, Porsche's No17 car had a 12-point lead over the No7 Audi, which meant it really was now or never. Webber could finally be champion. Provided the pace was maintained. Provided there were no mechanical gremlins. Provisions that endurance racing rarely allows. God knows, Webber had served his time. 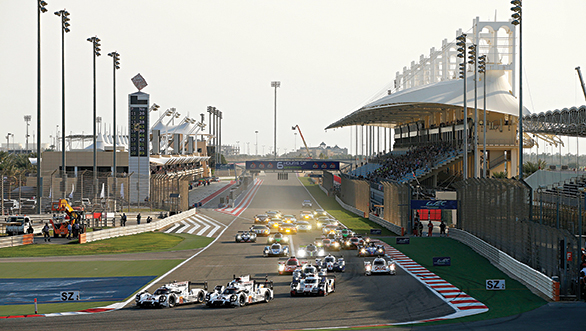 It had been years of single-seater racing for the Australian driver. Years when he had learned that your first and most fierce rival is your team-mate. Years of rather publicly strained relations between him and Sebastian Vettel. Helping a team-mate was something he'd unlearned during his time away from sportscar racing. Now, it was time to relearn those sporting ethics. And he'd done it well. When he'd signed on with Porsche at the end of 2013, he knew that he'd be playing the role of mentor to young Hartley. With the legendary Timo Bernhard, who'd already won the 24 Hours of Daytona, the 12 Hours of Sebring and the 24 Hours of Le Mans, Webber needed to help the next generation of racing blood. And young Hartley, who'd raced in the European Le Mans Series, Grand Am, and Le Mans, could do worse when it came to team-mates. 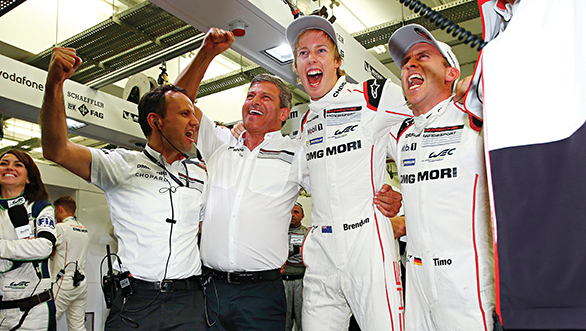 While the team is busy trying to calm the storm of the engine power crisis, I find myself wandering around the paddock, wondering why so many ex-F1 drivers end up in endurance racing. It isn't just Webber. Kamui Kobayashi, Anthony Davidson, Alex Wurz all took the F1 route to sportscar racing. In fact, it was a question I'd posed to the rather affable Neel Jani the previous day. And he'd given me the most convincing answer I've heard yet. Jani said that back in the day, F1 teams signed drivers on based on talent. It's something that's rapidly changing. Now it isn't just talent that counts, but the amount of money a driver can bring via sponsorship. Given that this isn't just break-your-piggy-bank money, but sums in excess of 20 million, many talented drivers can't afford it. And so they look at other series, like the World Endurance Championship, where they get paid to drive instead of just having to pump in money. Younger drivers are making it to the WEC now, the likes of Hartley, Richie Stanaway and Earl Bamber. It's a good time to be a part of endurance racing. And a good time to watch it. Looks like Porsche got their timing just right, what with Mission 2014, and then winning Le Mans in 2015!

But for Porsche, making a return to sportscar racing was no joke. With 16 wins under their belt, it seemed like no one would be able to touch their record at Le Mans. And then Audi entered the fray. And went on a winning spree. When they hit the number 12 mark, Porsche were sufficiently hot under the collar. They came back to the sport to claim what was theirs. But Mission 2014 didn't pan out how they'd wanted it to  Audi won number 13. Alex Hitzinger and the Porsche crew battled hard this year though, taking their record to 17 wins. But the rivalry between Audi and Porsche, even though they might be a part of the same group, is fierce as ever. Their approaches to endurance racing, though, are different.

Which brings us to the question  why do car manufacturers go racing at all? The truth, however bitter a pill it may be for fans to swallow, is that it doesn't have as much to do with passion, as it does with selling cars. And pushing the technological envelope to the edge. Audi going the diesel way means there is diesel excellence being pushed out into the Volkswagen Group. Porsche, thus, have chosen the petrol route, with a 2.0-litre V4 turbocharged engine. A small capacity engine, which, when the turbo kicks in on the straights, produces massive results. Le Mans-winning results, even. It's the best sort of advertising for any manufacturer, then, when their car lasts the torture on track that endurance racing results in. When it proves to be fuel efficient. When it goes the distance. And given that road cars are usually not subject to even five percent of the punishment a endurance racer goes through, there isn't much to fear. Racing drives technology, which then filters down to road cars which put smiles on the faces of customers. And these customers become fans. They cheer for the races, which drives the manufacturers to push the racing and race technology. And so this loop of racing driving sales, and sales driving racing, continues. In fact, I'm even told that the Mission E Concept that was debuted at the Frankfurt Motor Show this year will incorporate all that the company has learnt from endurance racing with the 919 Hybrid.

And it's Porsche's way of showing the world that they care about the depleting resources on our planet. That they're going green too. Just like endurance racing has. 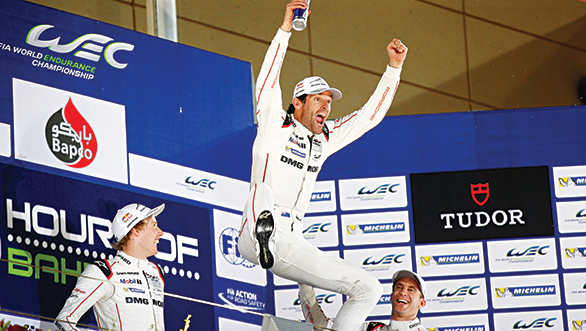 While I leave the respective teams to ponder over how to save energy resources and battle it out to be the best, I have an epiphany. I realise that endurance racing is not only about pushing man and machine to the limits. It is also about how everything comes together to achieve a state of perfect harmony, without which a race win is impossible. And to help the racers and their respective cars, there's this driving force behind it all  the race engineers and technicians. These unsung heroes are often the vital cog in the entire racing juggernaut. Imagine the consequences of tyres not being changed in a few seconds, or engine issues not being fixed in minutes, or the angle of the wing not being changed by precisely a single degree. The realisation also dawns on me that in such races, it's also the resources allotted to each team that must stand the test of endurance. 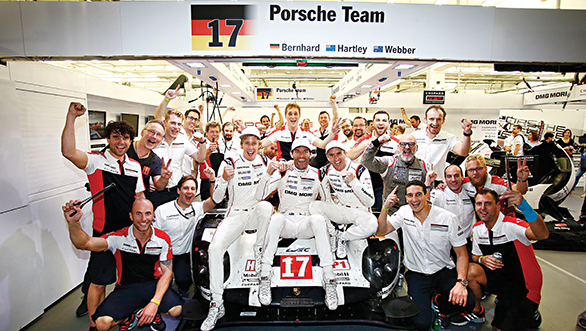 Back to the race then. The No17 Porsche which was leading when the engine power issues cropped up, dropped to position 5. This left the No18 Porsche to fend off the attack from the Audis and Toyotas. On the final stint, even with the actuator issue cropping up again (and aided by the fact that the No8 Audi is given a drive-through penalty) the No18 Porsche piloted by the wise Jani, and team-mates Romain Dumas and Marc Lieb wins the race. The No7 Audi follows home in second. And then come the two Toyotas, third and fourth. Which means Webber, Hartley and Bernhard's car manages to cross the finish line fifth. Enough to give them the drivers' title. It's the law of averages playing out. A flawless season, with an engine mishap to even things out. But the drivers' title nonetheless.

In the dark of night, I watch the celebrations under the bright lights. Champagne being popped. Victory leaps. Broad grins. Euphoria. And a world championship for Webber. What could go wrong, did go wrong. But it all turned out okay in the end. Joseph Murphy would have smiled.