Avalanche warning! That is what we heard on the airwaves a day before we arrived at Gulmarg and a day after we exited the town. I wasn't surprised. On January 20, 2015, my team and I recce-d Gulmarg just a couple of weeks before the Winter Drive was to be held. Gulmarg wore a skin of, hang on, not snow but dry earth. The road leading up from Tangmarg to Gulmarg was dry with some patches of snow on the shoulders. Gulmarg itself looked forlorn and disappointed, like winter had obviously forgotten this tiny hamlet, bringing the pain of dejection to a tourism-hungry ski destination.

Accuweather, the tabernacle of weather forecasts for most travellers had predicted snow but much like the Indian weather bureau, things weren't so accurate! Even the locals who kept looking up to the skies every now and then kept assuring us that the snow would come. Unfortunately, the only thing cold I saw that day were the cubes of ice in my drink. 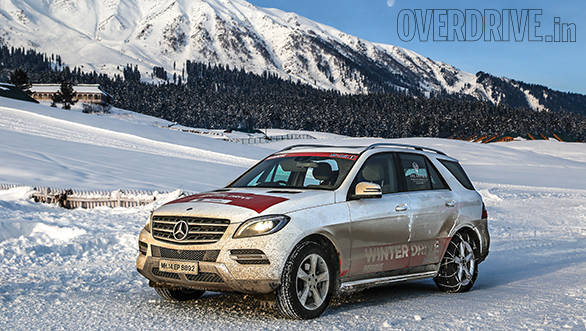 The next day we flew back, apprehensive if the weather gods would look down kindly on us and let it snow. As we stepped out of our flight in Mumbai and switched our phones back to cellular mode, Whatsapp beeped with an image sent by a colleague in Gulmarg. The frame was filled with something white, dense and thick as damp wood smoke. The cheers of excitement as high-fives got slapped around between the few of us who went for that recce had the other flyers look at us in disbelief. But we couldn't care less, because one week later we'd be in winter heaven!

And that is exactly what Gulmarg turned out to be, glistening in the snow, powder sparkling everywhere the sun shone down on it. I firmly believe the fact that our country has such magnificent natural gems that sometimes travelling abroad becomes redundant. Gulmarg is just one of dozens of such examples. The smooth mounds of snow spread out across this town give it a magical air. Driving in this would be surreal beyond belief.

Our rides for the 2015 edition of the Winter Drive would be the new Mercedes-Benz GLA 45 AMG, accompanied by old friends, the ML- and GL-Class SUVs. All of these are 4x4 SUVs which makes life a bit simpler in these tricky conditions. However, we struggled a fair bit last year because of the tyres the SUVs had back then. This year things were better, though we still needed snow chains to get us through the commercial routes. 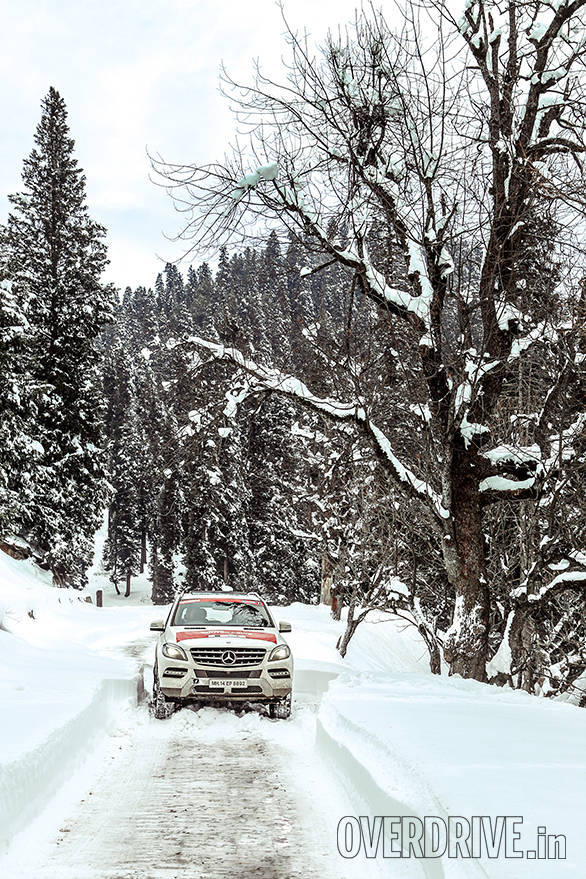 Gulmarg's outer road makes for a stunning drive past some of the most incredibly scenic locales. Narrow roads though can be tricky to navigate through

The roads leading up to Gulmarg were congested with traffic. Vehicular movement had increased since the snow fell because that gets a lot of tourists running to the ski slopes. In fact, when we recce-d the venue, the roads were bereft of ice and there was hardly any traffic. Now there was a constant stream of MUVs (shod with snow chains) ferrying people to the ski slopes and back. Fortunately, the roads hadn't iced up completely and the snow on the roads was still soft, which meant you had adequate traction to get by, unless you did something stupid.

What wasn't going to be easy was our purpose-built track. The average temperatures hadn't dropped as low as we had hoped they would. So what we had tacked down to build our driving course on wouldn't freeze over completely. To compound the problem, the sun had come out and at these altitudes, even a slight breeze carries warm air in it which acts like a hair dryer. This makes the snow soft and wonderful for skiers who keep falling into the stuff, but for us on the Winter Drive this was turning out to be a nightmare. 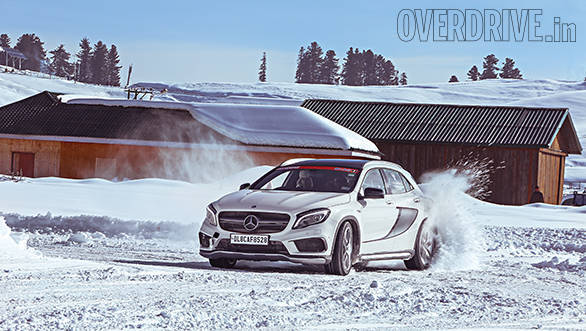 Picture this then, eleven drivers in three SUVs set off from the Khyber Hotel, the lone but very stunning five-star hotel in Gulmarg to the golf course. Out there, they get into the GLA 45 AMG on our purpose built driving track. Then they proceed to start going around the loop along with ace instructor Hari Singh. Slowly, they get the hang of it, coming quicker into the corners and then letting the tail slide out as they build the revs, opposite lock the steering wheel and drift out of the corners. This goes on for a while and then, the track begins to slowly disintegrate. First the tyres begin to pull out small chunks of snow, and then they yank out larger and larger chunks, and soon the GLA 45 AMG is teaching everyone how to shovel! But that is the Live Life in OVERDRIVE experience. 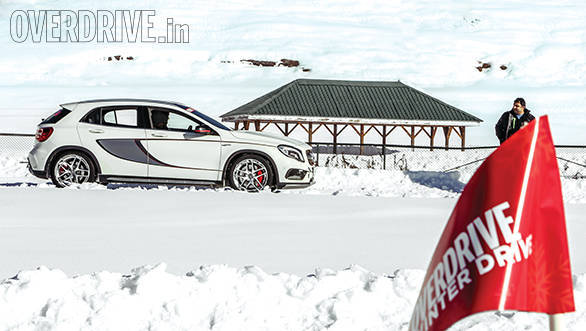 It's easy being intimidated by Hari Singh, five-time national rally champion and ace driver, who assists us as an instructor and course setter

When we first set out on our Winter Drive, we attempted driving up a pathway that was around a kilometre long. Except it was snowed in and we spent two hours shovelling, pushing and winching the SUVs up that path to cover that last kilometre. It wasn't easy but it was fun. At Gulmarg, we pretty much did the same. In between the rescuing and the driving, the participants generally cooled their heels off, literally.

After the track sessions, the participants also got to try out the braking exercises with Sanam Sekhon in the instructor's seat while some of the others drove around the outer ring road with ace rally driver, Sunny Sidhu. The braking exercise was simple, you drive down an incline maintaining just 40kmph and at a predesignated marker, you hit the brakes in order to come to a complete stop within an assigned area. An interesting exercise, it let everyone experience ABS, even though in these slippery conditions its effectiveness isn't as high as when on dry roads. So eventually you had participants planning their lift-off, braking on points to get as close within the box as possible. Unfortunately, a goof-up on our part resulted in some brake issues on the GL. I can still picture Bharat Reddy's puffed up and shocked face as he quite literally stood on the brake pedal of the GL trying to get the GL to stop. His effort landed him nearly twenty metres ahead of the box, worst braking record by far. Sorry Bharat, that one was on us! 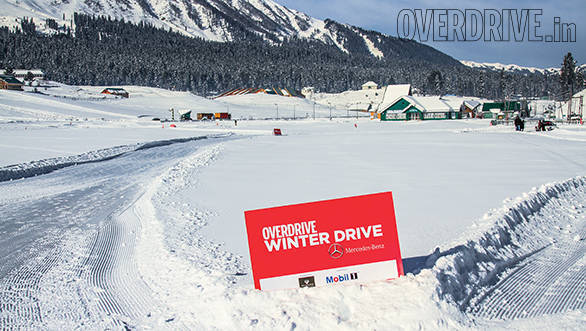 Our track on the Gulmarg golf course readied by the snow

On the road course, the Live Life In OVERDRIVE participants were getting more and more confident of driving in these conditions. Of course, it's also down to the electronics and the precise responses of these Mercedes engines and steering systems that kept things under control. Incidentally, sometimes the electronics don't always work to your benefit in these conditions. For instance while driving downhill on these slippery surfaces, traction control systems may detect slippage and apply the brakes to correct but that could upset the vehicle more than intended. At this point, it's up to the driver to understand whether he needs to apply a bit of power or correct the steering wheel input or drop a gear to ensure he is back in control. It's tricky but by the end of the day, almost everyone got the hang of driving in these conditions. 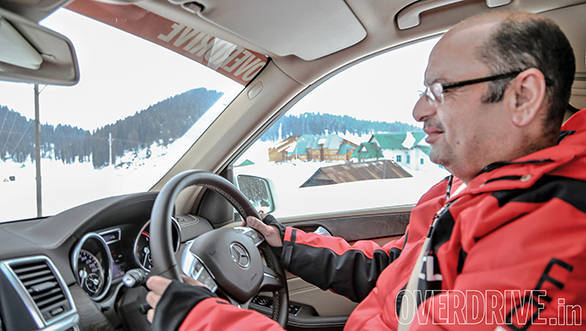 Deepak Chaddha, one of the participants, stays focused on the road

Fortunately for us, the day wound up without incident and everyone retired to the Khyber to partake of its comforts. And then around 8pm that night, the weather gods decided to smile down on us again. The evening began with a slight flurry but by the time dinner was done, it had transformed into a steady fall. By midnight, the snow was around a foot deep and the next morning when we woke up, another foot and a half must have piled up on top of that. All of Gulmarg was under a thick blanket of powder. So deep was the snow pile that our cars were completely buried. The shovels would have taken just too long to dig us out so we had to enlist a snow blower to clear the parking lot. But when our drive was over, the roads all across Gulmarg were snowed in. Access to anywhere except the road leading down to Srinagar was impossible. Time to head back home. 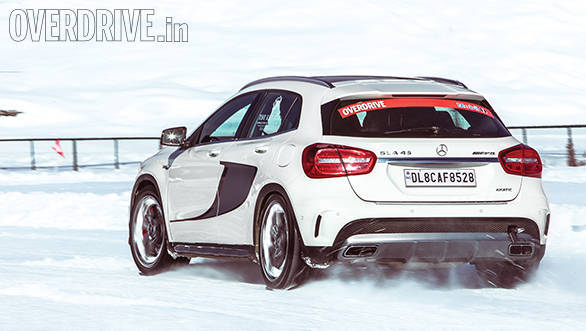 The 2015 edition of Winter Drive was fun. Tiring, yes. . . but fun. Amidst the driving and shovelling and playing in the snow, we met some incredible people who were more than ready for an adventure. Next year we hope to catch up with more kindred souls with as much enthusiasm as this bunch so keep an eye out for further announcements of such drives on our website.

More from OVERDRIVE on the 2015 Winter Drive: 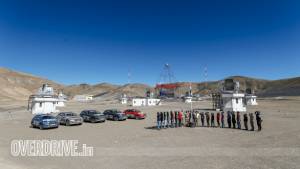 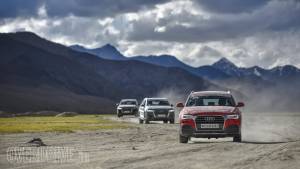 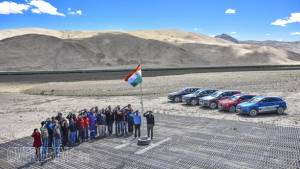