It's okay, calm down." Now these are the sort of words you normally hear a race engineer saying to a racecar driver. On occasion you're even likely to find a family member or friend trying to soothe the frazzled nerves of a racer under pressure. But it's not so often that you witness what I saw at the second round of the FIA Formula E championship at Malaysia. That was Karun Chandhok, who'd been very much in contention for a podium finish in the race, talking to his mechanic. And when a racer has to calm his mechanic down, it usually is an indicator of a rather serious situation. 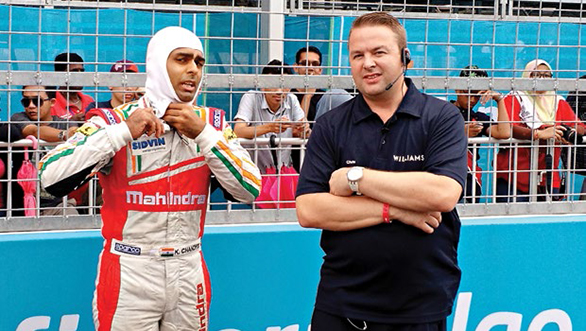 You see, Karun had been in fourth position on the Putrajaya street circuit when he decided he needed to pit and change his car. His regular mechanic had been hospitalised with heat stroke the previous evening, the dreaded Formula E Putrajaya Malaysian sun getting to him, and his replacement was a relative rookie. No wonder then that he was nervous when the car needed to be swapped, with perhaps a hint of his inexperience showing through. The pitstop cost Karun 14 seconds, and it was those 14 seconds that could have made all the difference, seeing him through to the podium. A team of 13 people manage each racecar in the Mahindra pits. And these mechanics and engineers are exclusive to each of the drivers - Karun and team-mate Bruno Senna each have a dedicated team working with them, in order to ensure that the quality of work on each car remains consistent. And this also drives home the point that the Formula E championship, like most other forms of motorsport, really is a team effort. 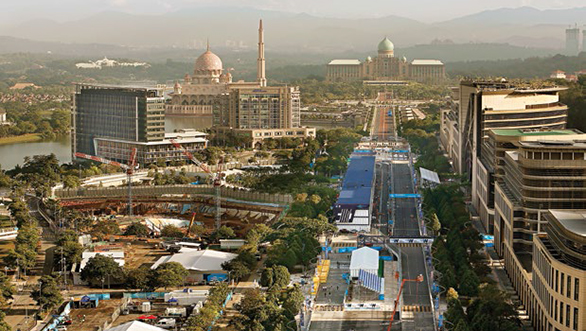 Of course, the botched pitstop meant that there was something of a blanket of gloom in the Team Mahindra Racing pit area. But it wasn't overwhelming. There were still a few smiles going around thanks to the fact that Karun, with some rather valiant driving, managed to notch up some points. Before the race Dilbagh Gill, team principal, Mahindra Racing, had said to me. "It's a team sport and a win or loss is shared equally by the team," and I get a sense of exactly this in the Mahindra garage. Of course, Gill also says, "We have the pace and are looking good in each race. We have to now translate this into a winning streak," a clear indicator of the way forward for the team.

The Formula E round at Putrajaya, Malaysia, much like all the other rounds, was being held at a street circuit. The circuit looks fantastic, and clearly wins the drivers' collective approval when they come back into the pits after the 15 minute shakedown on Friday and declare that the course is better than the street track in Beijing. This 2.5km stretch, they de clare, is also rather tricky because of the undulating surface. Nestled amongst the official buildings of the Malaysian government, the street race promises good footfalls. The stand by paddock and the pits have been constructed over a period of one month, I'm told. "Somebody had to work towards it. It was a chicken-egg situation. There were no teams and hence no championships and since there were no championships, no teams or cars," says Alejandro Agag, CEO of Formula E Holdings. Agag believes that Formula E should be a technology competition and not merely cars racing around. He says that the focus of the championship is sustainability, along with keeping costs low. And given the interest that the series is managing to attract from sponsors and given the fact that there is a 25 year contract with the FIA already in place, things are looking good for now. 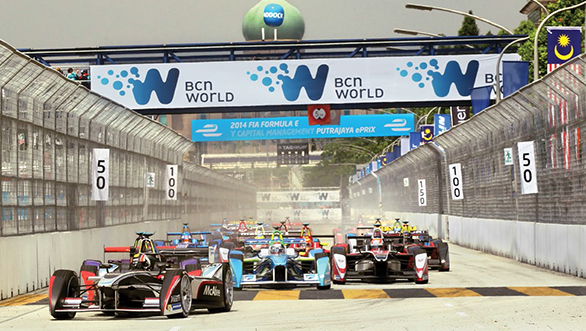 The series is focusing on young fans, trying to get them hooked onto the concept of a clean mobility solution, which someday will translate into more electric cars on the road and hence a cleaner environment. It's also for this reason that Agag has put in place the FanBoost system, where viewers can vote for their favourite driver, and based on their votes three drivers get 30kW more power for five seconds for each of their cars during the race. Add to that the fact that drivers are more accessible to fans, and the human connect of Formula E has a huge potential. Something we noted even in our tour guide Franky, who was thrilled that he had a chance to get up close and personal with some of his favourite former F1 drivers. 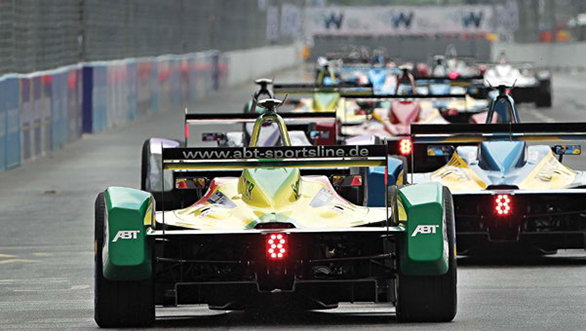 Back to the race then. The qualifying happens on the very same day as the race. So on Saturday, four groups of five drivers each are given 15 minutes to set their fastest lap. Team Mahindra Racing, the only Indian team in the Formula E had its racers Bruno Senna and Karun Chandhok in group one and two respectively. Nicolas Prost claimed the pole position followed by Oriol Servia and Sam Bird. Karun with some very good lap times ended up fifth on the grid, while Bruno was seventh. Of course, the crash between Prost and Heidfeld at the first race in Beijing had earned the Frenchman a 10-place grid penalty, which meant he would only start eleventh. When the racing got underway, and once I got used to the rather strange sound of the Formula E cars (truth be told, they sounded to me like cranky Maharaja mixer grinders) I was able to process that it was Sam Bird who was dominating the proceedings.

The BMW i8 safety car was deployed following a collision between Katherine Legge and Michela Cerruti. And soon after that, the safety car was once again called into action when Matthew Brabham and Nick Heidfeld collided. But away from all the chaos, the two Mahindra drivers were picking up the pace and making steady progress through the field. Karun especially looked good when he overtook Abt on the opening lap, while Abt would later declare that he'd been having car trouble from the word go. Senna also overtook Abt soon enough. Karun managed to then make his way past Oriol Servia to take third place, and even looked good to take second position from Jarno Trulli. But then came the matter of the delayed pitstop. 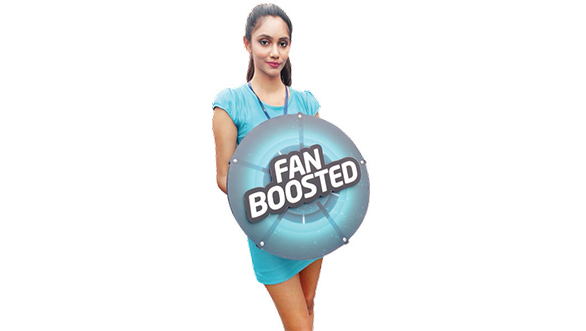 Over in the other Mahindra Racing car, Bruno Senna looked good. Equipped with FanBoost for this race, he looked set to be able to do well, but things didn't quite pan out that way. Senna managed to waste his first use of FanBoost when he attempted to get past Nelson Piquet Jr, who was too far ahead to catch. Although the second time, when he made use of the Death Race style toggle switch, he sailed past arch rival Prost. But his race came undone when he tried to overtake Sebastien Buemi on the last lap, and ran into a wall. However, full credit goes to Sam Bird for keeping a cool head and finishing on top of the heap. He was in fact the only driver in the race who raced for 19 laps in a single car, without the customary pitstop. 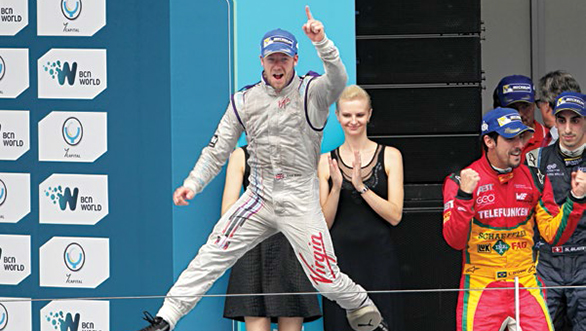 This strategy worked for him as he was able to maintain his lead throughout. Beijing race winner Lucas di Grassi also displayed exemplary driving skill to finish on second after starting from ninth on the grid. But it was Buemi, who started from nearly last on the grid to pull through and bag a podium finish, who stole the show. Meanwhile Karun notched up the points, to take joint third place in the championship standings. After the race is over, I'm watching the Formula E teams pack up, watching as the fans leave the track, and watching Putrajaya's racing circuit change back into a public road. And it is at this point that I start to wonder why Mahindra is involved in this at all. Ofcourse, the obvious answer is that the company, having recently acquired Reva, is keen on getting ahead in the electric car market and is also keen on changing the perception of electric cars as slow moving vehicles that get in people's way. If Formula E does catch on, there's a very good chance that they might achieve just that. We're a few battery charges, a few car swaps and