It was time. The cars were light, the spare wheels were at the ready, permits were locked and loaded, and we were all raring to go.

"This is Q5 Two, I have the package. Panic is not needed."

All the humour had gone out of the radio messages as we turned off towards Phobrang Model Village on our way to the last settlement on this road, the ITBP camp at the base of the ridiculously difficult 23km climb to the top of Marsimik La. 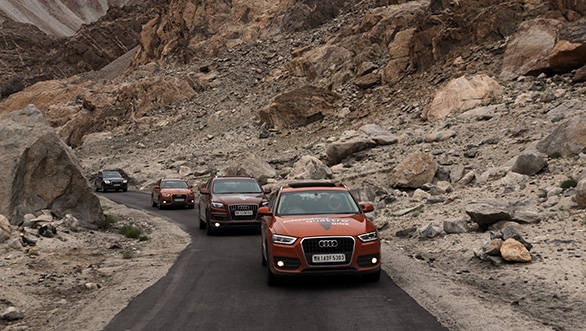 The road up to the camp was dispatched with a calm urgency before the guard at the camp flagged us off with a smile. I am still not sure what he was smiling at. Was it our ludicrously urban looking Audis in this rugged setting? Or the prospect of turning us back because the climb was too hard? Or because we didn't have permits?

We never found out. Once we showed him the papers, he smiled broadly, pointed down the road and said simply, "That way. It's tough. But please get off the mountain by 5pm. It gets really windy on top and the weather gets worse. We will, but don't make us come rescue you lot." 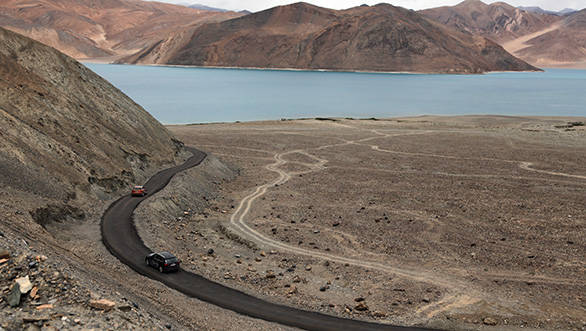 It gets really windy on top and the weather gets worse

Right sir. I saw a bead of sweat pop up on Bert's forehead spontaneously. It was half past three and that gave us just an hour and a half to get it done.

One turn later, the tarmac first broke, then shattered and then gave way to packed dirt. The Audis seems extremely happy through it all.

"Team, watch for stones. This climb is full of sharp stones and you don't want to cut your sidewalls."

Ah Murphy you annoying ass. The moment the words came out of the radio, the Q7 slowed to a stop. On cue, a sharp stone had managed to slice the Q7 tyre. 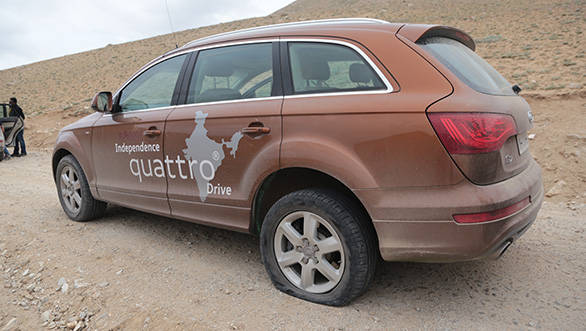 A sharp stone had managed to slice the Q7 tyre

With an eye on the clock, we decided to leave Halley and Ashok to fix it up and join us on top and carried on. Marsimik La had claimed its first victim for the day.

The next few kilometres were horrifying. A road was being built to connect the ITBP post to an outpost beyond the pass but it was blocked off which means we couldn't use it. Which means treading as carefully as possible through what look like easy terrain except that it was a minefield of sharp stones designed by the mad scientist who was trying to defeat pneumatic tyres.

The unpainted milestones passed with a glacial, menacing slowness as we slowly inched our way to the top. Every capability of the all-wheel drive system was being tested. All Audis had one wheel in the air at some point, used their rear-view cameras to get around the sharpest hairpins without slicing the tyres or indeed, reversing right off the mountain.

Inside the cabins, it was all cool and comfortable but we were not just well past 16,000 feet but the slow pace and the tension of the rocky road was getting to everyone. Why can't we ever do something easy for a celebration, then? We could have just gone and driven an exotic car with a has-been celebrity or rented a racetrack and partied all day with fast cars, right? Too easy. Inching along with throbbing hearts is much better. Hmph.

And then it began. "Rain!" said the radio and within seconds, the automatic wipers were working hard to keep the windshields clear while the tyres scrabbled for traction. The outside temperature dropped instantly from a comfortable 11 to a chilly 5 degrees. 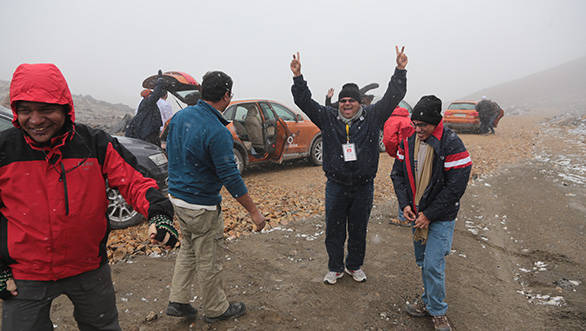 "SNOW!" And then the rain turned to snow.

"Guys, we need to hurry. If this turns into a blizzard, we will never find our way back, and there is no one here to ask for directions on the way back either."

With renewed urgency we continued our cautious crawl until the radio message from the first car came. "I've reached. Come on you lazy bums!"

One by one all four Audis reached the top of the pass. One of the luxuries of having the whole mountain to yourself is that you can park whichever way you like. Breathing hard from the altitude  we were nearly at 19,000 feet above sea level. Think about that. That's two-thirds of the way up Mount Everest in road-going cars. At this height, every movement is a conscious effort. Just breathing will make you breathe heavily. And we had work to do.

"Chi chi so so largayalo!" We cried and got to work.

The wind had picked up and was now driving snow crystals almost horizontally while we set about assembling the flag pole. Within moments it became clear that 3 degrees or less, driving snow, high altitude and winter gloves don't go with spanners, nuts and bolts.

The team, including the new members, weathered the storm as we quickly had our 12-foot pole ready. The original plan was to have four guy-wires hammered into the ground to steady it but the wind was too strong, the prospect of wielding a hammer too intimidating at this altitude and we decided instead to wedge the pole next to the Marsimik La board and hold it in place.

Er... What board? So remote is this mountain that unlike all the other passes, that yellow BRO board simply isn't there. There are prayer flags and a couple of stone slabs that have messages saying we were now at the top of the world. We picked the closest one, stuck an OVERDRIVE sticker on it so you will recognise it the next time you get to the pass and planted the flagpole.

Commander Bertrand D'souza was called upon to hoist the flag. It was a clever choice because whoever hoisted the flag was going to get a face full of snow.

And then the moment came. The snow seemed to pause, the wind eased up just a bit as Bert pulled on the rope and sent the Indian tricolour up. 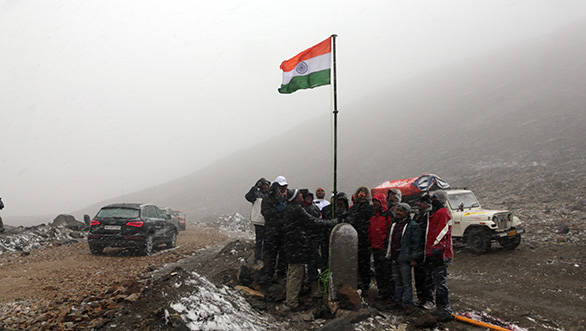 Our chests swelled, our smiles deepened and for once, a 1..2..3 was not required to sing the national anthem

It was an easy motion but the silence told everyone how much it meant to us. Our chests swelled, our smiles deepened and for once, a 1..2..3 was not required. The team broke into the national anthem with perfect timing. Goosebumps.

Never have I felt this proud to be an Indian, and I am very proud of being Indian. A quick glance around showed that everyone felt exactly the same way. It was a quick glance because snow was freezing on my forehead at this point and giving me the most hellish headache of my life.

But our words were clear, the pride evident and though there was no one to see how glorious the flag hoisting was, we were singing for the world.

Team OVERDRIVE was on top of the world on Independence Day riding in India's 66th in the biggest, most amazing fashion we could think of.

Marsimik La is magic, I tell you. Moments after the flag was up, the anthem was still echoing off the mountains and everyone was busy getting photographs taken. Hugs were being exchanged and chocolates being passed around.

And the light changed. The grey darkness suddenly gave way to an eruption of golden light. It looked like God had turned the headlights of his Audi on us.

Within moments, the clouds and fog parted to reveal an epic vista of valleys and mountains bathing us in a warm, golden glow of light that was very welcome. If this was a video game, it was as if the final boss as been defeated. 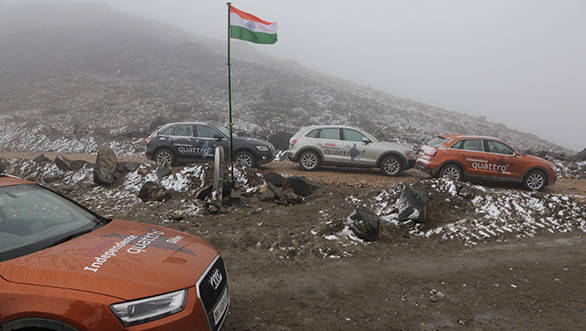 Team OVERDRIVE was on top of the world on Independence Day

But it was real. Already three members of the team were looking worse for the wear and 19,000 feet isn't really a rational place to be hugging, singing, assembling poles or hoisting things. Bert, as usual, was the first to plug back into the harsh reality while we basked in the glory of what we had managed.

Framed by a setting sun he said, "Guys, congratulations we've done everything we can. But now we still have to get back down. And collect Halley and Ashok on the way. So please, back in the Audis."

"Shumi, you looked very busy while we were assembling the pole. So now you're responsible for ensuring it is stowed. Here's a spanner, give me your glove."

Ah Murphy, you got me again. 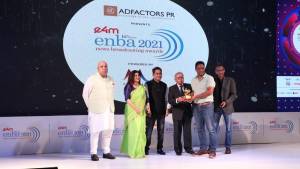