We all love our comfort zones. And why not, they are after all what we excel at and where we love to be. But life's generally determined by how well you adapt to being pulled out of your happy space. And the second EMR exhibition race at Gurgaon was definitely a new experience for most of us. Instead of organising the race at one of the country's three race tracks Toyota decided to try something different. A large open ground was identified at Gurgaon and Toyota then went on to lay a tarmac track. Now this wasn't your regular wide and fast race track but an ROC (race of champions) style circuit.

Coming back to those comfort zones, it was clear that a lot of the faster guys at Chennai were finding it hard to find pace. Both Diljit and Arjun Narendran who were podium regulars on the last round hit the tyre wall while fighting to set the quickest times of the day. The reason - the ROC format is very different from circuit racing. The track we were driving on was very tight and narrower than most go-kart circuits. The grip levels were quite lower than what we were used to at the MMRT in Chennai. The tarmac itself was taking a battering thanks to the hard driving coupled with the assault of the slick tyres and there was a constant build up of fine gravel as the tarmac wore down. The result was plenty of understeer with even a whiff of too much throttle. Since the speeds were nowhere as high as last time around, the damage was mostly limited to broken bumpers.

Friday was all about getting acquainted with the new style of driving required for this circuit. The trick was to be as smooth as humanly possible. Aggressive throttle work may feel fast in the car but the lap times tell a very different story. Being harsh with the steering and throttle simply resulted in understeer and wheelspin out of corners both of which kill timings. By the end of the day's practice sessions Binoy John Maddela was the quickest of the 25 drivers while I clocked the sixth fastest time.

Amey Rane who was fastest for most of day one blitzed through qualifying, setting a time 0.7 seconds quicker than second placed Ali Yawar Hayat. Diljith's bad luck continued when he accidentally drove in the wrong direction in qualifying resulting in a DNF that ended his weekend. I hadn't done much better and a poor lap meant I was out of the top twelve. Fortunately I got a second chance in Qualifying 2 and managed to top the times to get into the pre-quarter finals. Amey who was consistently setting the quickest times hit the tyre wall in his race which meant a five second penalty. Despite that he only lost by 1.5 seconds. Unfortunate considering that he could have given Binoy a proper fight to the finish. My race went well this time and I set the third fastest time on the way to the top eight. Sadly a poor start and too much speed into one of the corners threw my quarter final race away and I lost to Mezaan Anees who ultimately finished in third place. That was the end of my weekend but the quarter finals were full of neck and neck battles after which Swamathia Rayen, Mezaan Anees, Vendhan Boominathan and Binoy John Maddela made it to the semis and ultimately finished in that order with Maddela winning it.

The weekend taught us a few very important lessons - you have to be extremely precise with your inputs, keep a focused mind and most importantly, find consistency. It's relatively easy to set one or two blazing laps but the challenge is to keep setting the fast times lap after lap. Valuable lessons for the exciting next round. The exciting bit? EMR is going to be part of the famous night race in Sri Lanka and fifteen selected drivers from this round will be competing. Racing abroad is going to be a very exciting and invaluable experience for us all. And you know where to read all about it. 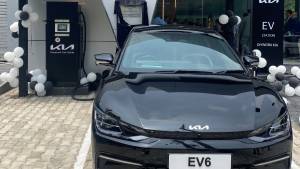 Vehicle sales surge upwards for the month of...