10 greatest rally cars of all time

Rallying is one of the most challenging forms of motorsport for both the driver and the machine. A rally car is driven in the most demanding conditions, be it gravel, broken roads or even snow. While rally cars have calmed down a bit over the years, they've become faster. What makes it even more interesting is that most cars are based on on-road models, and some made specifically for rallying but subsequently introduced to the public as high-performance street cars.

In the past 40 years, there have been quite a few iconic rally cars. Here are, what we think, the 10 greatest rally cars of all time. 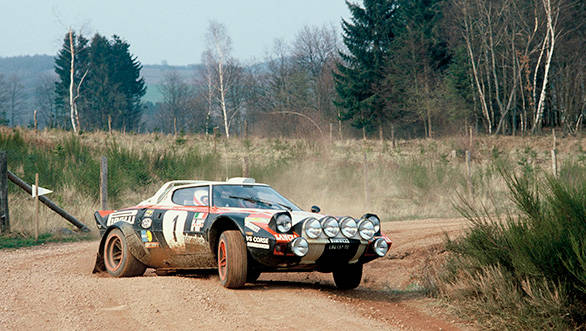 The Stratos was developed to be a rally car and only made it to production since the rally homologation demanded it. The car was so successful that it went on to win the World Rally Championship thrice in a row from 1974 to 1976. With a lightweight fibre-glass body, the Stratos was a supercar made for rallying, and was powered by a Ferrari Dino V6. The car was designed by Bertone in Italy and is best known for being the car that drivers loved going sideways with thanks to a powerful engine and rear wheel drive. The Stratos is definitely a legend and is even regarded as one of the best looking rally cars of all time. 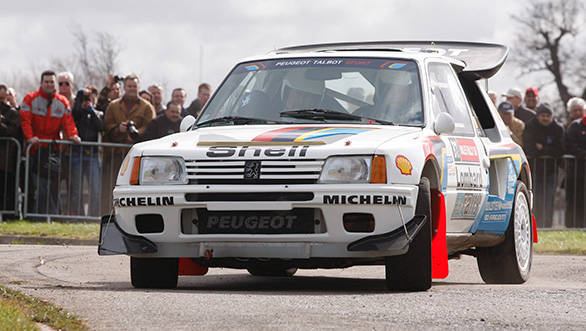 Another star that emerged thanks to the Group B class in the 1980s was the Peugeot 205 T16 (Turbocharged and 16 valves). The French maker's first Group B car resembled the compact 205 from the outside but everything else was completely different to the road car. The 4-cylinder motor moved to the rear of the car and power was sent to all four wheels. The car produced close to 450PS and weighed just 900 kilos. This made it a treat to watch every single rally. The car was very competitive and it went on to claim the World Championship in 1985 and 1986. Group B rallying unfortunately came to an end thereafter, but the T16 was modified to take part in several other rallies such as the Pikes Peak Hill Climb and the Paris-Dakar rally. 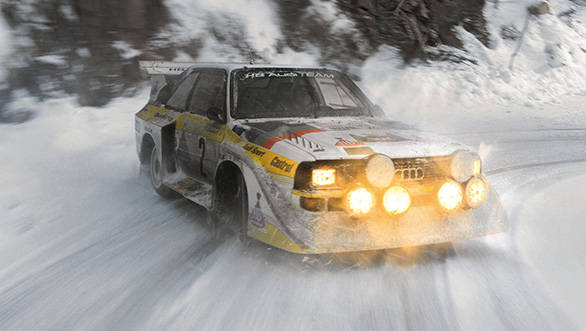 When Audi created Quattro (their version of the all-wheel drive system), it created a new category of rally cars that not just put out insane power but could also put it down to better use thanks to four powered wheels instead of two. This meant that other manufacturers went back to their drawing boards and had to redevelop their cars all over again. The sport Quattro was front-engined, produced 450PS and had its wheelbase shortened drastically to aid in super handling. The five-cylinder engine could produce much more but was restricted due to the Group B regulations. Weighing in just over a tonne, it was light too, and thanks to a high power to weight ratio and a game changing power-shift gearbox, the car could accelerate to 100kmph in just 3.1 seconds. Unfortunately, the car never saw success in the WRC. But in 1987 Walter Röhrl took a 600PS S1 to victory in the Pikes Peak Hill Climb making it the car's third consecutive win in the Colorado event. 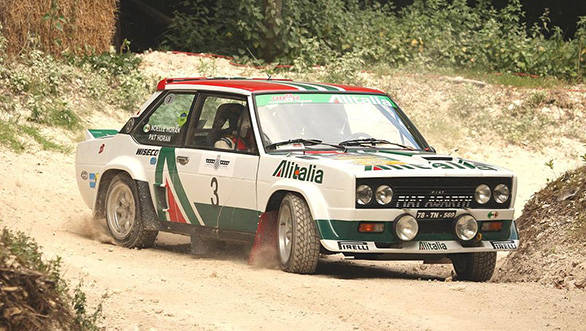 The Fiat 131 was a humble family car from Italy that was a common sight in most houses in Italy and the rest of Europe. But in the year 1976, the Italian manufacturer created a monster in the form of the 131 Abarth, named after Fiat's Motorsport division Abarth. To homologate the car for competition use, 400 road going cars were made. The 131 was a rear-wheel drive car, and it was perfect for rallying then since the 4WD era was yet to come. The car was modified to accommodate a fully independent suspension, the engine was upgraded to a 2.0 litre unit with 16valves (not a common configuration in the 70s) and the gearbox was a 5 speed unit. The most obvious change, however, was to the bodywork: the wheel arches were widened to match the increased track, spoilers and an air dam were also included giving it a true rally machine look. The 131 Abarth gave Fiat three World Championships in the years 1977, 1978 and 1980. 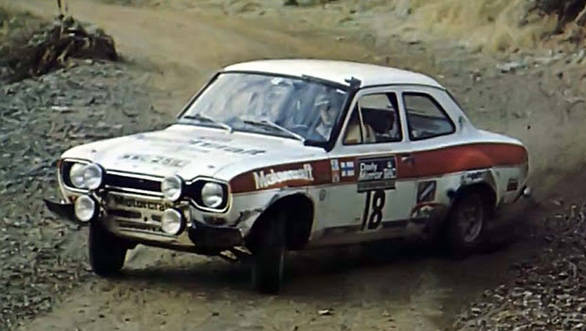 One look at Ford' overall victory list will tell you how successful the Mark 1 Ford Escort was. The car was hard to beat in the 1960s and the 70s. Powered by a 1.6-litre engine, the family car was transformed into a reliable rally car by the Ford works team and other manufactures found it hard to keep up. In 1970, the car, in the hands of Finnish legend Hanu Mikkola, went on to even win the London to Mexico World Cup Rally. Out of 100 cars that took part in the rally, only 23 finished and most of them happened to be Escorts. Ford went on to participate in future rallies with various other cars, but the Escort started it all and is the car that has given them the most wins. 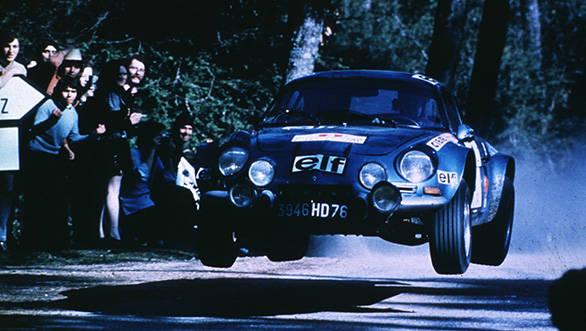 The A110 was the result of assembling various parts from Renault cars by French manufacturer Alpine, and as a result was purpose built. It was a sports car that was powered by a various Renault engines and in its most powerful state, produced 125PS and could max out at 210kmph. The car was immediately  recognised internationally when it debuted as a rally car in the 1970s. It went on to win several rallies in Europe including the Monte Carlo Rally where it finished first, second and third with an all French driver-co driver team. The rear engined, rear wheel drive sports car was very nimble and was considered to be one of the strongest rally cars of its time. Renault recently unveiled a concept Alpine car that takes inspiration from the original A110 and will soon be seen on the roads as a production sports car. 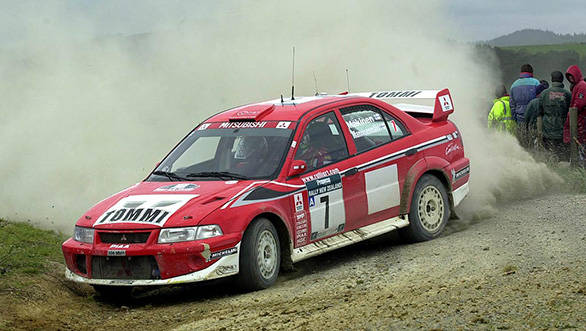 The Lancer Evolution will go down in history as one of the most successful rally cars ever. In 1992, Mitsubishi developed the car for competition use and as a result created a high-performance road-going car as well, thanks to homologation rules once again. The Lancer Evolution is known for its turbocharged 2.0-litre engine and all-wheel drive system; this combo made it a highly competitive car in the WRC. Legendary Finn, Tommi Makkinen piloted the team's works car and clinched the driver's title for a record four years in a row from 1996 to 1999. The car was known for its extreme agility and high speed dynamics. Tommi was unstoppable in this car, making it a tough challenge for rivals including Colin McRae. Mitsubishi later replaced the Evolution with a rally only model called the Lancer Evolution WRC, but it's the older Evolution that gave the Japanese manufacturer the legendary status. The car is rallied even today in a few Group N rallies. 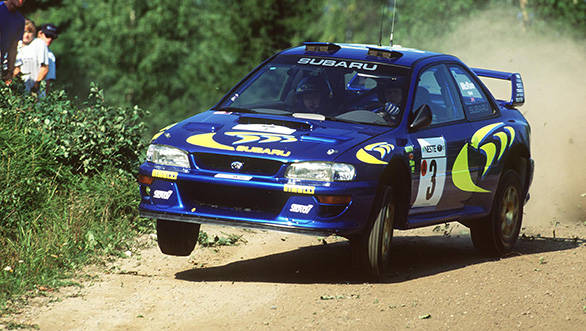 Think Impreza and one will imagine a blue car usually flying low with yellow 555 livery on it. That's because the car usually came out on top during the last rallying decade. Developed especially for competitive sport, the Scooby has gone in to be one of the most successful rally cars ever. It was driven by legendary rally drivers, Richard Burns, ColinMcRae and, more recently, Peter Solberg and Chris Atkinson. The Subaru World Rally team is no more active in rallying, but the team claimed the world championship in 1995, 1996 and 1997. The success in rallying has helped the road going Impreza WRX achieve cult status and has helped the company sell good numbers. Both the rally and road cars are best known for their agility and are the reason why the car is still being used by privateers around the world in Group N rallying. 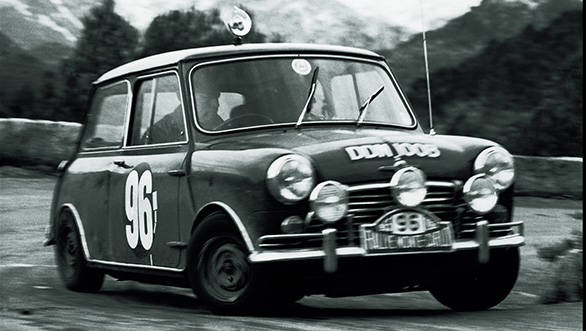 In 2010, the rallying world was super excited with Mini returning to rallying after a really long gap. Four decades ago, and it was the tiny Mini Cooper that went on to win the legendary Monte Carlo Rally three times in 1964, '65 and '67. The small people's car turned out to be perfect for rallying, and it even went on to out-pace larger rally cars in those tight European stages. The Cooper has won more than 25 rallies till date, a figure very few rally cars can boast of even today. 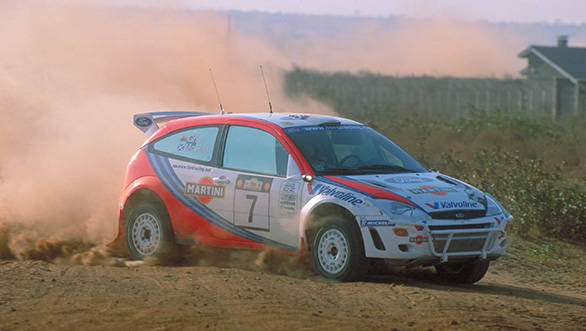 The first generation based Ford Focus never went on to win the World Rally Championship but makes it to this top 10 list since it still outpaced its competition in several rallies in its debut year. Colin McRae drove the car to its best potential, and it was a spectacular sight in every single rally. The car took a lot of abuse and at times, like in the Rally of Argentina, even flipped more than once but still finished the rally. The car is also the focus of the Colin McRae Rally Game; this PC and Playstation game has got a lot of modern day enthusiasts from around the world hooked into the world of rallying. The Focus was upgraded every year and new models emerged until recently but the first gen car will always be the one that paved the way. 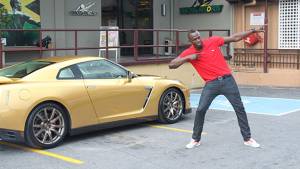 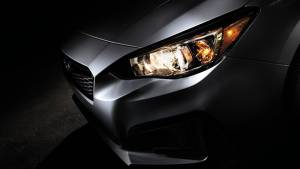