In the Caterham 7 Asia Zonal Championship held alongside the Formula 4 South-East Asia Championship at the MMRT near Chennai, both races of the weekend saw B Vijayakumar from Coimbatore take the win. Following him in both races for the second and third place were MR Dastur and Vicky Chandhok.

In the first of the 10-lap Caterham race, spectators were treated to some intense moments when Vijakumar started on pole but was quickly overtaken by Chandhok. Eventually, Chandhok was given a 30-second penalty for a jump-start which meant he ended up being classified in third place. 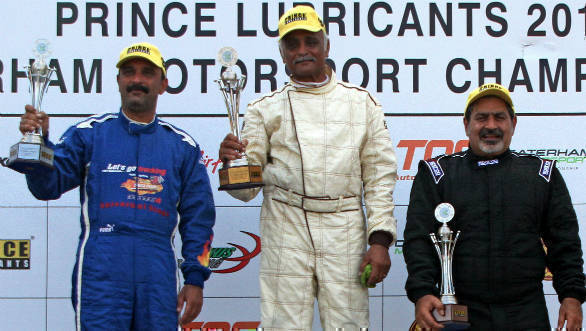 B Vijayakumar (centre), MR Dastur (left) and Vicky Chandhok who finished in that order in both the Caterham 7 races (Sept 9)

In the three 15-lap Formula 4 South-East Asia Championship held over the weekend, each race threw up a different winner. The first race saw Frenchman Alessandro Ghiretti win, he was followed by Kane Shepherd (Thailand) and Luke Thompson (Ireland). In the second race, Alister Yoong from Malaysia took the top step of the podium, he was joined by Ghiretti and Antoine Potty from Belgium. In this category's last race, Muizz Musyaffa (Malaysia), Alessandro Ghiretti and Kane Shepherd finished first, second and third respectively. Evidently, Ghiretti stood out in this class.