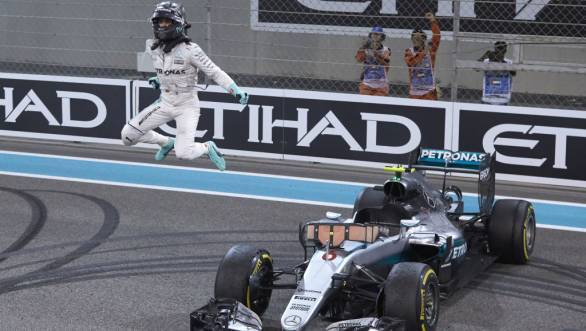 Nico Rosberg won the 2016 Formula 1 Driver's Championship title after finishing second at Abu Dhabi's Yas Marina circuit. It was Rosberg's Mercedes AMG F1 team-mate and title-rival Lewis Hamilton who won the race. Rosberg went into the race only needing to finish third, to take home the title, in the event that Hamilton won the race. As things turned out, he managed to finish second. Rosberg now forms part of only the second-ever father-son duo to win F1 world championship titles - his father Keke Rosberg won the title in 1982. The other father-son world championship dup are the late Graham Hill (1962, 1968) and Damon Hill (1996). Rosberg is now the 33rd Formula 1 world champion.

For Hamilton, who was on pole at Abu Dhabi, it was clear that a race win could still not ensure him a title. However, he still did the best that he could, taking a lights to flag win. Third-placed Sebastian Vettel did put Rosberg under pressure during the closing stages of the race. It wasn't just the Ferrari driver who gave Rosberg a reason to sweat, though, with Red Bull Racing's Max Verstappen (who ultimately finished fourth) also putting pressure on the German. Verstappen himself had an eventful race and did well to finish fourth after a first lap altercation with the Sahara Force India of Nico Hulkenberg saw him drop down to last on the grid.

Finishing fifth for Red Bull Racing was Daniel Ricciardo, while Kimi Raikkonen finished sixth for Ferrari. Seventh and eighth places for the two Force India drivers - Hulkenberg and Sergio Perez, ensured that the team took fourth place in the constructor's championship. Felipe Massa took ninth position in his last ever F1 race, while Fernando Alonso took tenth, and one point for McLaren. His team-mate Jenson Button, also driving his very last F1 race, did not finish. Button's McLaren suffered a suspension problem on the 12th lap of the race.

Meanwhile, Hamilton's win was his tenth win of the 2016 season, while Rosberg's tally of first places from 2016 is nine.