Valtteri Bottas scored victory at the Azerbaijan Grand Prix, the fourth round of the 2019 Formula 1 season, keeping team-mate Lewis Hamilton at bay. It was Mercedes' fourth straight one-two finish of the four races held this season. Sebastian Vettel took third place for Ferrari. 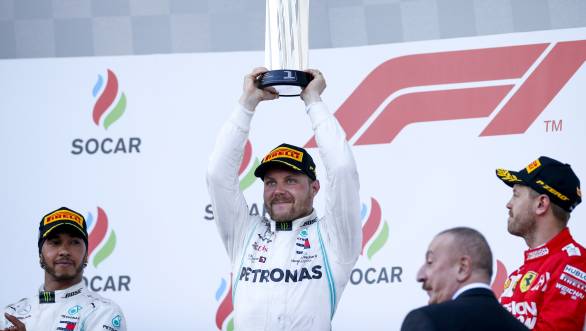 Valtteri Bottas celebrates his victory at the 2019 Azerbaijan Grand Prix

Bottas was on pole at Baku, and got off to a moderately good start when the race began. The Finn came under attack from his team-mate during the first few corners, but he managed to hold his own and continued in the lead of the race. From then on he managed to lead the race largely unthreatened, with the sole exception of Ferrari's Charles Leclerc staying out at the head of the order on medium tyres, longer than anyone else on the grid. Leclerc, who started eighth on the grid after crashing out of qualifying during Q2, was on a different strategy to the front runners, and his troubled weekend got worse when he lost time on worn tyres, with Ferrari calling him into the pits for a very late stop. 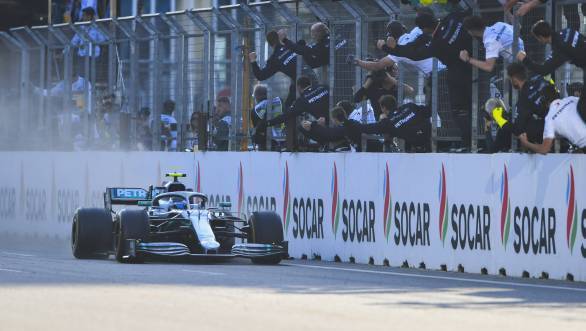 Bottas crosses the finish line at Baku, claiming his second F1 win of 2019

Hamilton managed to cut down Bottas' lead towards the end of the race. The pair were separated by less than two seconds, until a late Virtual Safety Car stint was caused when Pierre Gasly's Red Bull came to a stop on track. Hamilton did manage to get closer to Bottas once again, within DRS range, but the Finn managed to retain his lead and crossed the chequered flag first. His win gave him a one-point advantage at the head of the championship standings, which he now leads with 87 points. Hamilton, with 86 points is second, while Vettel is third with 52 points. 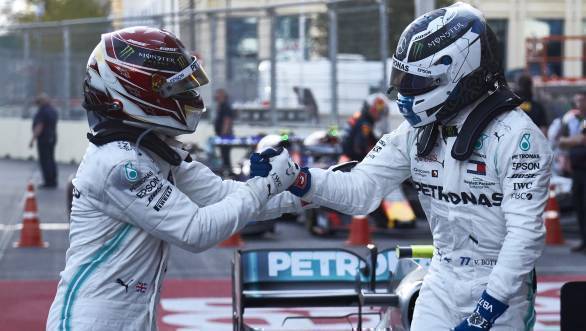 Vettel managed a third place finish for Ferrari, while Max Verstappen finished fourth for Red Bull Racing. The second Ferrari, with Leclerc at the wheel, finished fifth. He also claimed a point for fastest lap of the race, when Ferrari switched him onto a new set of soft tyres for the last couple of laps.

Racing Point's Sergio Perez finished sixth, while McLaren drivers Carlos Sainz and Lando Norris finished seventh and eighth. Ninth place went to Lance Stroll in the second Racing Point car, while Alfa Romeo's Kimi Raikkonen (who had a pitlane start after having been disqualified from Qualifying) took the final point for tenth place.