Lewis Hamilton took victory at the 2019 Hungarian Grand Prix, claiming his eighth win of the season. The Mercedes driver managed to catch and pass Red Bull Racing's Max Verstappen, using a clever two-stop strategy to his advantage. Over the last 20 laps of the race, Hamilton had fresher rubber compared to the Red Bull driver ahead of him. While Verstappen struggled on old tyres, Hamilton made up over 20 seconds, and managed to pass the Dutchman with four laps left in the race, claiming victory. The British driver now leads the championship standings by 62 points as the season heads for a summer break. 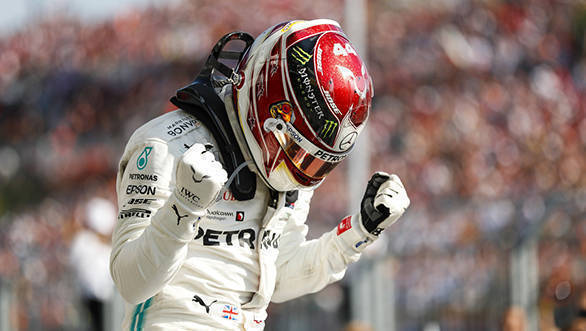 The man on pole at the Hungarian Grand Prix was Max Verstappen, fresh from success at the German Grand Prix held only a week earlier. Verstappen managed to get a good start when the five red lights went out, and pulled into the lead ahead of Hamilton. However it was bad luck for Valtteri Bottas, who ended up making contact with Ferrari's Charles Leclerc. The Finnish driver had damage on his car, but stayed out for five laps in all, before finally coming in for a new front wing. This dropped him down to last on the grid, and he spent the rest of his race working back through the order.

Up ahead, Hamilton was busy battling Verstappen, with the duo pulling away from third placed Leclerc and his Ferrari team-mate Sebastian Vettel. With the first round of pitstops coming up, it was Verstappen who went into the pits at the end of the 25th lap. He went back out on track on hard tyres, ahead of the two Ferraris. Mercedes kept Hamilton out on track longer, and opted to call him in at the end of the 31st lap. This, coupled with a slow change to the front tyres, ended up ensuring that Verstappen had a five-second gap to Hamilton after the latter's stop.

However Hamilton soon got on the job, managing to close in on Verstappen within two laps. When the race was at the halfway point, the two began to work their way through backmarker traffic, with Hamilton managing to get quite close to taking the race lead. A couple of moves almost came together, but not quite, and the British driver was left sitting in second place. He was summoned into the pits at the end of the 48th lap. Mercedes switched Hamilton to medium compound tyres and then sent him back out. Up ahead, Red Bull decided that they would keep Verstappen out on track. Bringing him in would mean that he would end up behind Hamilton on track. However, Hamilton, with newer tyres, began making inroads into Verstappen's lead. Verstappen responded with a series of fast laps himself, and it seemed like Hamilton would not be able to catch him. However, when Hamilton found himself in clean air, he was able to gain over a second a lap on the race leader. Verstappen found himself on tyres that were, in his own words, dead, losing more than two seconds per lap. 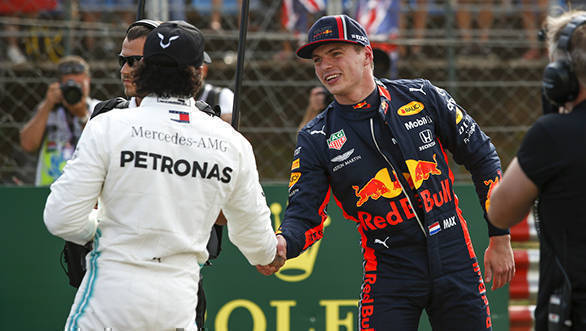 With just give laps left, Hamilton managed to get past Verstappen and shoot into the lead. Meanwhile Red Bull finally brought Verstappen in, gave him a pair of soft tyres, and sent him back out on track. This meant that Hamilton claimed victory - his seventh at Hungary - by 17 seconds. Verstappen settled for second place, plus a point for fastest lap, and Vettel claimed third place ahead of Ferrari team-mate Leclerc.