Victory at the Formula 1 season opener at Melbourne ensured that Sebastian Vettel and Ferrari got off to a good start in 2018. The German driver beat Mercedes driver Lewis Hamilton to the win, while third place went to Ferrari's Kimi Raikkonen. 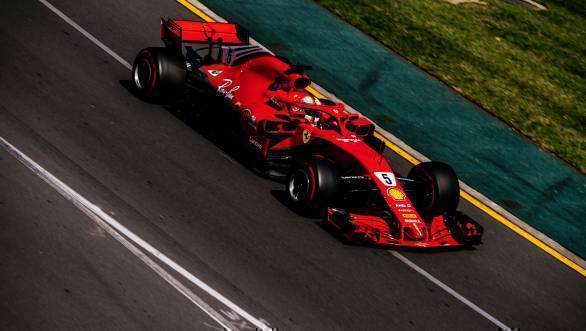 Starting on pole, Hamilton managed to get off to a good start over Ferrari drivers Raikkonen and Vettel, leading the first stint of the race, with a four second gap to the chasing pack. Raikkonen was ahead of Vettel until his pitstop. After him, Hamilton pitted, and came back out in second place. Meanwhile Vettel was still out running on Ultrasoft tyres, where he stayed until a Virtual Safety Car (VSC) situation was caused when the Haas of Romain Grosjean needed to be cleared. The VSC allowed Vettel to get into the pits and out of the pits with a lead over Hamilton.

After the VSC was converted into a full Safety Car, and once the Safety Car went into the pits and racing resumed, it was Vettel who led from Hamilton and Raikkonen. The Red Bulls of Daniel Ricciardo and Max Verstappen were both recovering after having been stuck behind the Haas F1 machines. Fernando Alonso in the McLaren was in P5. 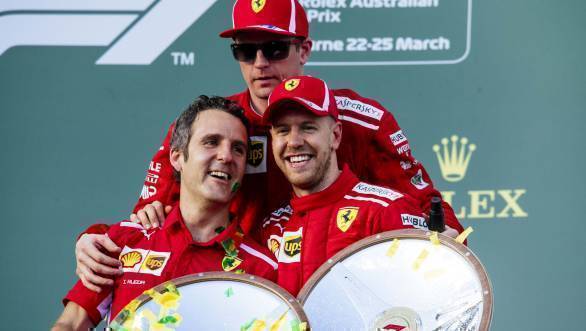 The rest of the race saw Vettel continue to lead, while Hamilton tried to get close enough to pass him. However, a mistake saw the Brit run wide onto the grass, which meant that the gap was back up to 2.5 seconds. It meant that Vettel was able to cross the finish line first, taking victory at the Australian GP, while Hamilton took second place, a little over five seconds behind. Kimi Raikkonen took third place, and Ricciardo took fourth. Fernando Alonso took fifth place, with Verstappen sixth, Renault's Nico Hulkenberg seventh and Valtteri Bottas eighth in the second Mercedes. Stoffel Vandoorne took ninth place for McLaren, while Carlos Sainz Jr rounded off the top 10.