Lewis Hamilton claimed victory at a dramatic Azerbaijan Grand Prix, snatching his first win of the 2018 season of Formula 1. With 15 laps left in the race, Hamilton was running 20 seconds behind his team-mate Valtteri Bottas who was the race leader. But a collision between Red Bull drivers Max Verstappen and Daniel Ricciardo would result in a chain of events that tipped things in Hamilton's favor. 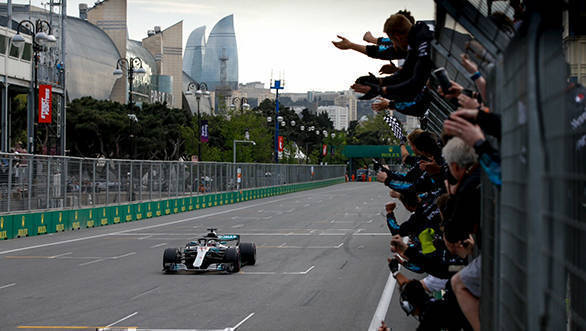 At the start of the race, though, it was Sebastian Vettel who took the lead from pole position, with Hamilton running second and Bottas running third. Behind, the second Ferrari of Kimi Räikkönen collided with the Force India of Esteban Ocon, putting the latter out of the race.  Sergey Sirotkin, meanwhile, was caught between a rock and a hard place - read Nico Hulkenberg and Fernando Alonso, which forced him to retire, and brought out the Safety Car. Alonso pitted on two wheels, while when the Safety Car peeled into the pits, Vettel took a  commanding lead once again.

The battle between the Red Bull drivers was already on, with Ricciardo already having been pushed wide once by his team-mate. Their battle continued through the race, and they had a few close moments, making contact but without sustaining damage.

Up ahead, Vettel was leading the race, with Hamilton falling behind, seemingly into the clutches of the Red Bull's. However, with the RBR drivers increasingly preoccupied with each other, Hamilton could still focus on the battle for first, distant though it might have been. It was when Red Bull's Ricciardo and Verstappen had both pitted, and were  back out on track, with Ricciardo attempting to regain his position from Verstappen, that things came to a horrible end for Red Bull. Verstappen closed the door on Ricciardo, the two collided, and the race was over for the both of them. 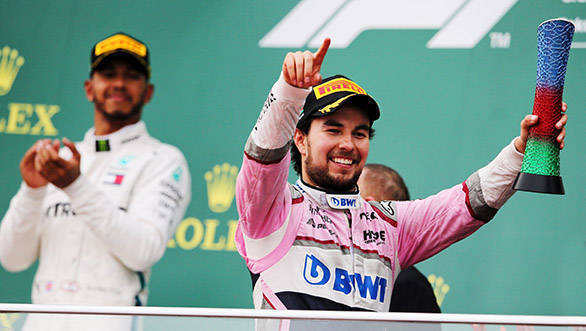 The Safety Car Situation caused, helped  Mercedes, who ended up pitting Bottas and getting him back out on track ahead of Vettel. Another Safety Car was needed, when Romain Grosjean crashed out. Bottas made a good start at this point, leading from Vettel, who did try to get past, only to run wide and end up fourth on track. Bottas looked set to take victory, but disaster struck, with his right rear tyre blowing, and the Finn unable to get his car to the end.

Hamilton was then the man in the lead, two seconds clear of Kimi Räikkönen, who crossed the chequered flag second, while Force India driver Sergio Perez finished third - his first trip to the podium since 2016.