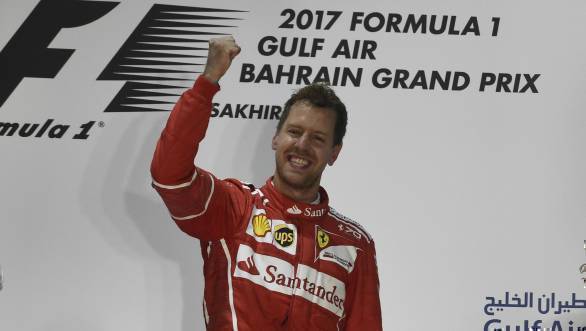 Sebastian Vettel celebrates victory at the 2017 Bahrain GP, his second win of the season

Ferrari's Sebastian Vettel took his second win of the 2017 Formula 1 season at the Bahrain GP, allowing him to move to the head of the driver's championship standings after three races. The German driver, who also won the season-opening race at Australia, now has 68 points, seven points clear of Mercedes' Lewis Hamilton who has 61 points. Third place in the championship standings currently rests with the other Mercedes driver, Valtteri Bottas on 38 points.

The Bahrain GP started with Bottas on pole, the very first of his F1 career. When the five red lights went out, it was the Finnish driver who got off to a perfect start, pulling away from the chasing pack. There was some amount of chaos behind him though, with Vettel getting the jump on Hamilton, moving into second place. Vettel then set off after Bottas, while Hamilton followed, chased in turn by Max Verstappen and Daniel Ricciardo in the Red Bulls. Three seconds separated the top five drivers. 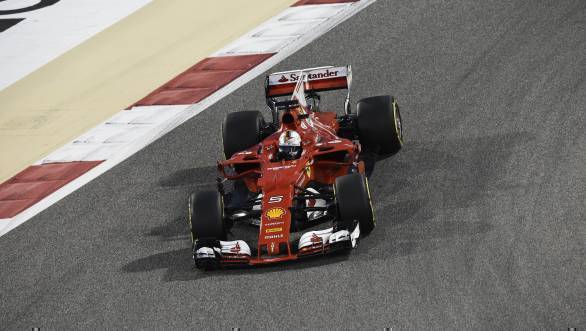 Vettel then decided to pit at the end of the tenth lap, allowing him to get out from behind Bottas. Verstappen was the second driver to pit, but was soon sent into retirement, when he rear brakes failed on his out lap, sending the Dutch driver into the wall.

When Lance Stroll and Carlos Sainz Jr. ended up making contact with each other, it was the Mercedes drivers who pitted. Bottas lost time in the pits, coming out behind Vettel. Hamilton, who entered the pits soon after slowed down in the pit lane so as to allow Mercedes enough time to send Bottas on his way before Lewis came along. But since he impeded Daniel Ricciardo while doing this, he was handed a five-second penalty.

When the racing began again on the seventeenth lap, Vettel was at the head of the order, followed closely by Bottas. And though the Mercedes tried to get past the Ferrari, Vettel was having none of it. Meanwhile, Hamilton moved up to third place. Up ahead, Vettel managed to steadily increase the gap over Bottas, gaining a lead of around six seconds by the time the race had reached the halfway mark. 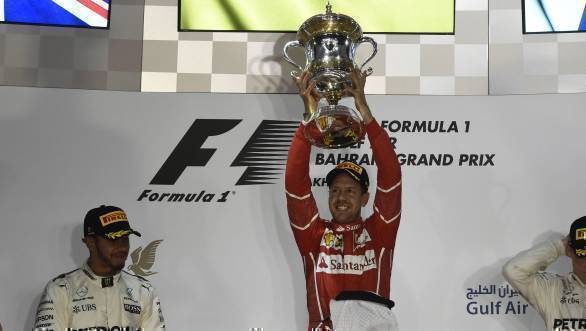 Hamilton looks on as Vettel raises the winner's trophy for the Bahrain GP. Valtteri Bottas, only half in the frame, was none-too-pleased with third

Bottas was struggling by now, the tyres on his Mercedes overheating. This allowed Hamilton to take position from his team-mate. Eventually Mercedes brought Bottas into the pits and replaced his ailing super-softs with a soft compound tyres. Vettel pitted soon after, while Hamilton led the race. When the British driver finally pitted, his car was also shod with soft tyres, and he came out of the pitlane in third place. He'd get past Bottas, who was told to let his team-mate by, to take second place. The Finn would have to remain content with third.