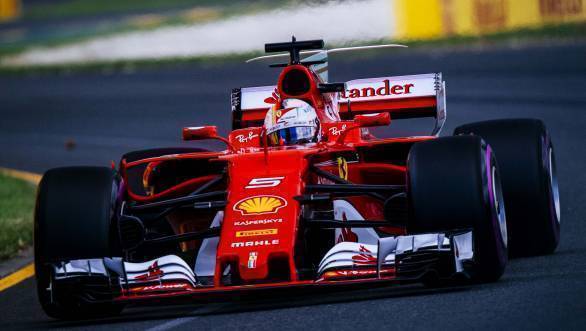 The 2017 Australian Grand Prix was a thriller. This, because even though it was Lewis Hamilton who began the race on pole, things changed after the first round of pit stops. Hamilton pitted early, relinquishing the lead of the race to Ferrari driver Sebastian Vettel. And when Vettel went in for his first pitstop of the race, later than his rival, he managed to come back out on track ahead of the Mercedes AMG F1 driver. From that point on Vettel led the Australian GP, steadily increasing his lead over Hamilton, who had to ultimately settle for second place. Third place at the Australian GP went to Hamilton's team-mate - Valtteri Bottas.

Let's go back to the beginning though. While the race start was aborted, after Nico Hulkenberg's Renault was found to be out of position on the grid, things went well for Hamilton during the restart. He was able to pull ahead of Vettel and increase the gap to the chasing Ferrari, while team-mate Bottas slotted into third, with Ferrari's Kimi Raikkonen fourth and Red Bull's Max Verstappen fifth.

When the pitstop window opened, it was Hamilton who pitted first, at the end of the 17th lap. The Mercedes AMG F1 W08 was shod with soft tyres that would last him till the end of the race. When Hamilton came out on track once again, he found himself behind Max Verstappen, who would simply not let him get past. Then Ferrari called Vettel in for a pitstop on Lap 23, allowing him to get back out at the head of the order. While Verstappen pitted, Hamilton found himself in second place, already six seconds behind Vettel, with Bottas breathing down his neck. Thus things would stay till the fall of the chequered flag.

There were changes up and down the order though, and moments of excitement and disappointment thrown in too. Daniel Ricciardo's race ended in retirement, much to the sorrow of his Australian fans. Which meant that when the race was over, it was the lone Red Bull of Max Verstappen that took fifth, behind fourth-placed Kimi Raikkonen. Felipe Massa took sixth place on his return to F1 with Williams (well he never really went away), while his team-mate Lance Stroll's race ended in retirement.

Vettel's victory at the 2017 season-opener is his first win since the 2015 Singapore Grand Prix.