Sebastian Vettel claimed pole position at the Mexican Grand Prix, his 50th career pole in the sport. The Ferrari driver pulled out a near-perfect lap during Q3, which denied Max Verstappen a chance at pole. If Verstappen had managed to claim pole, however, it would have made him the youngest driver to claim pole in the history of Formula 1. 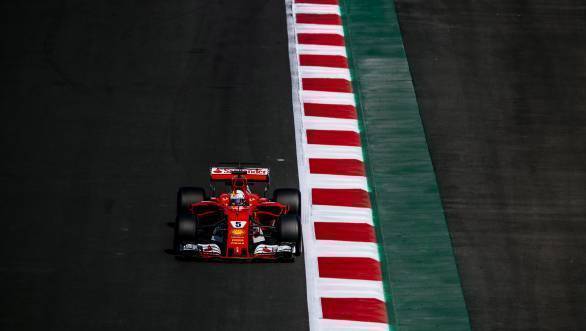 Sebastian Vettel will start the 2017 Mexican Grand Prix from pole

Verstappen did indeed look like he would take pole, after he had managed to lead both Vettel and championship-leader Lewis Hamilton during the initial runs during Q3. However, Verstappen's last attempt wasn't able to yield the best lap of the session. Thus it fell to Vettel to make the most of the opportunity, which he did, setting a time of 1min 16.488sec, which was 0.086 seconds ahead of the Red Bull.

While Verstappen had to settle for P2, there was some doubt that he might be penalised for impeding Valtteri Bottas during his hot lap in Q3. However, the Dutchman was allowed to keep his position after the stewards analysed the matter.

Four-tenths of a second off Vettel's pace, and third on the grid is Lewis Hamilton. This still leaves Hamilton with a very real chance of claiming his fourth F1 championship title after the race. The Mercedes driver needs to finish in the top-five in order to snag the title. Fourth place on the grid goes to Hamilton's team-mate, Bottas.

Nico Hulkenberg and Carlos Sainz Jr took Renault to P8 and P9 on the grid, while Sergio Perez rounded off the top 10.

Williams duo, Felipe Massa and Lance Stroll took 11th and 12th position respectively. Brendon Hartley managed to take 13th on the grid for Toro Rosso (his best qualifying position yet in F1), although he didn't set a time during Q2 thanks to an engine issue. The McLarens of Fernando Alonso and Stoffel Vandoorne took 14th and 15th on the grid. Marcus Ericsson and Pascal Wehrlein took P16 and P17 for Sauber, while Haas F1's Kevin Magnussen and Romain Grosjean took 18th and 19th on the grid.

Pierre Gasly took the last spot on the grid, after engine issues necessitated two engine changes, leaving him down in 20th position.