Sebastian Vettel's victory at the 2017 Monaco Grand Prix was Ferrari's first win at the prestigious event in 16 years. The German driver, already four-time F1 champion, finished the race ahead of team-mate Kimi Raikkonen. It was Raikkonen who was on pole initially, however Vettel managed to get ahead of the Finn after the first and only pitstop session. Later on in the race it did look like Vettel was likely to lose his position, thanks to a Safety Car period, however, he drove well to take the win after all. 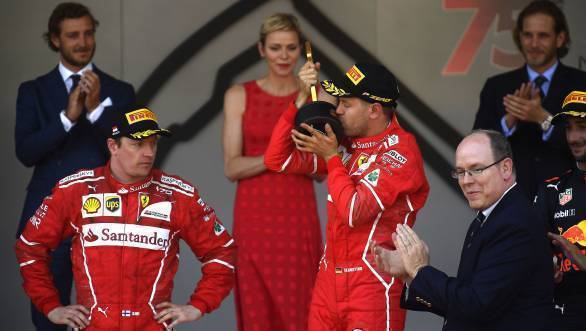 Sebastian Vettel celebrates his second win at the Monaco GP

When the five red lights went out at Monaco, it was Raikkonen who got off to a good start, leading in the beginning. Vettel took off right behind him, with Mercedes AMG F1's Valtteri Bottas in third place. Raikkonen seemed like he'd be able to keep Vettel at bay, and did fairly well too, with the pair even managing to increase the gap to a chasing Bottas. When it was time for pitstops, though, it was Max Verstappen who was the first driver to pit, with Red Bull Racing blinking on lap 33. Bottas pitted one lap later, coming out of the pits ahead of Verstappen. Ferrari brought Raikkonen in next, and sent him out into the middle of traffic. This meant that Vettel was able to stay out late, and put in a set of blistering laps. 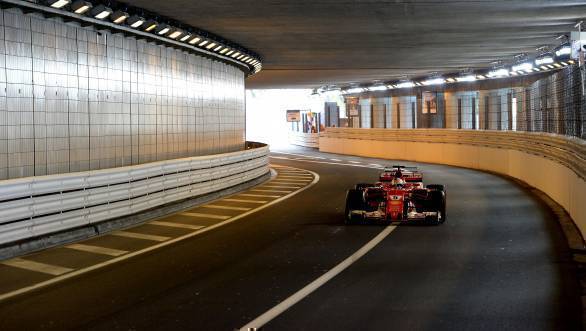 Vettel in the famed tunnel at Monaco

When he finally did pit, it was after setting a series of fastest laps. Ferrari sent Vettel out on super-soft tyres, ahead of his team-mate Raikkonen. It was a slightly strange crash, with just 17 laps left in the race, caused when Jenson Button (filling in for Fernando Alonso) tried to dive down the inside of Pascal Wehrlein. The Sauber driver's car flipped and came to a stop on its side, leaving him trapped inside until marshals rescued him. 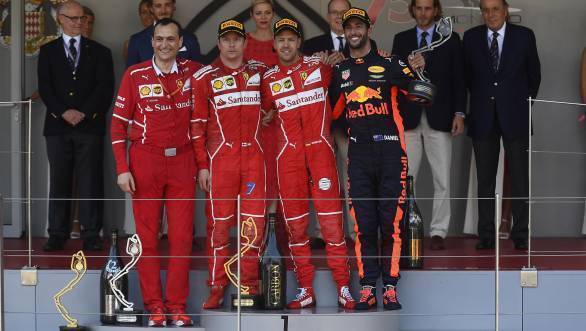 Raikkonen looks a little bothered by the fact that Vettel got the jump on him at Monaco. Or is that just Iceman Kimi as usual?

When the race was restarted, Vettel managed to open the gap up at the head of the order, although team-mate Raikkonen was the cause of some worry. But it was Vettel and Raikkonen who coasted to a 1-2 finish at Monaco for Ferrari. Red Bull Racing's Daniel Ricciardo was third.

This means that Vettel has now managed to increase his lead in the championship to 25 points.