Lewis Hamilton took pole position at the 2017 British Grand Prix, giving home fans a reason to cheer. The Mercedes AMG F1 driver produced a perfect lap at the very end of the qualifying session, with a laptime of 1min 26.600, which was half a second ahead of the rest of the pack. 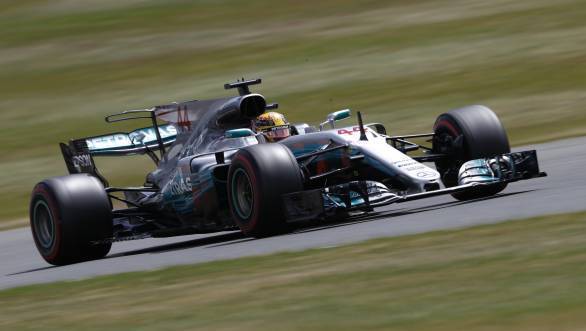 There was some amount of concern within the Mercedes camp after Hamilton set his pole time, because he came under investigation by the stewards for blocking Haas F1's Romain Grosjean. However he was cleared, with the stewards declaring that he would not face a penalty for the incident.

Second place on the grid went to Kimi Raikkonen in the Ferrari, while Sebastian Vettel took third place in the second Ferrari. The timings that the Ferraris posted were enough to push the other Mercedes of Valtteri Bottas down to fourth on the grid. Unfortunately for Bottas, who won last weekend's Austrian Grand Prix, a five-place grid penalty for a gearbox change will push him down the order to ninth place on the grid.

Max Verstappen set the fifth fastest time for Red Bull Racing, while Renault's Nico Hulkenberg set the sixth fastest time. Setting the seventh and eighth fastest times were the Force India duo - Sergio Perez and Esteban Ocon. Stoffel Vandoorne set the ninth-fastest time, out-qualifying his team-mate Fernando Alonso who in fact had managed to set the fastest time during Q1, quite a surprise for McLaren. Tenth-fastest was Grosjean in the Haas Ferrari.

Alonso ultimately set the 13th fastest time, but will start further down the order due to grid penalties.