Lewis Hamilton clinched his career's 71st pole position in Formula 1, after setting the fastest time during Q3 at the 2017 Japanese Grand Prix. Hamilton's time of 1m 27.319s was the new outright lap record at the Suzuka Circuit. 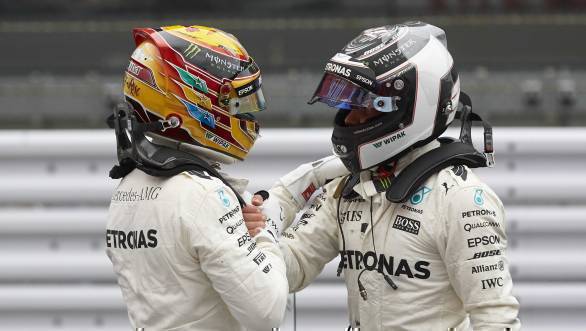 Setting the second-fastest time was Hamilton's Mercedes AMG F1 team-mate Valtteri Bottas. However, the Finn has incurred a five-place grid penalty for an engine change, which means he will start the race further down the grid.

This elevates Sebastian Vettel, who set the third-fastest time of the session, to second on the grid. The fourth and fifth fastest times went to Daniel Ricciardo and Max Verstappen, of Red Bull Racing, while Kimi Raikkonen set the sixth fastest time. Raikkonen, has also been given a five-place grid penalty.

Esteban Ocon and Sergio Perez set the seventh and eighth fastest times, with Felipe Massa setting the ninth-fastest time on the grid. Fernando Alonso set the 10th fastest time, but has been hit with a 35-place grid drop after an engine change at Honda's home race.