Hamilton took his Mercedes AMG F1 car to the head of the grid with a lap time of 1min 22.188sec, which beat out Ferrari driver Sebastian Vettel to second on the grid. However, Ferrari certainly does seem to have gotten things right in 2017, helping them take the challenge to Mercedes far more effectively than they did in 2016. 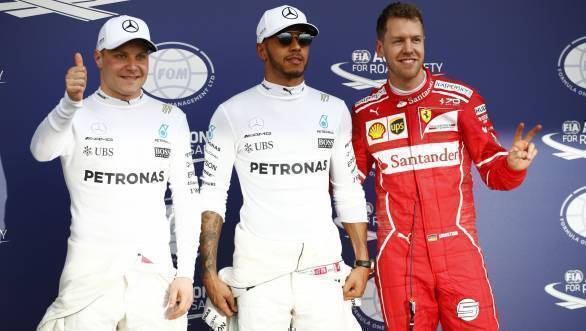 Pole man Lewis Hamilton, flanked by Sebastian Vettel who starts P2 on the grid, and Valtteri Bottas who starts from P3

Third place on the grid went to Hamilton's team-mate Valtteri Bottas, who replaces Nico Rosberg at Mercedes AMG F1. Bottas just managed to pip Kimi Raikkonen to third place, with the second Ferrari driver having to settle for fourth place on the grid.

Sixth on the grid went to Romain Grosjean in the Haas F1, while Felipe Massa took seventh spot on the grid for Williams. The two Toro Rossos of Carlos Sainz Jr and Daniil Kvyat will start eighth and ninth on the grid. 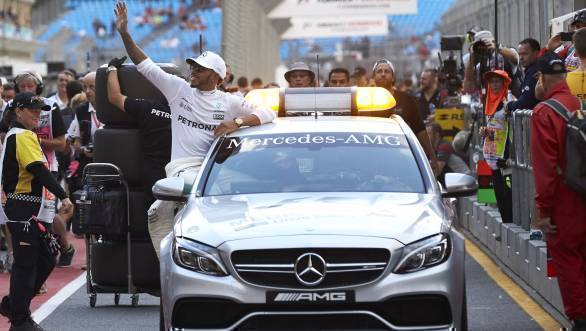 It was also a difficult qualifying session for Sergio Perez in the newly pink Force India. Perez's car suffered an engine issue, which meant that he could qualify no higher than eleventh place. Twelfth place on the grid went to Nico Hulkenberg, driving for Renault this year.

Fernando Alonso's trials continued with McLaren, with the Spaniard able to drag his car to 13th on the grid - a far higher position than it might have managed had anyone else been at the wheel. Fourteenth position went to Esteban Ocon, also driving for Force India.

Perhaps the big surprise of the qualifying session was Antonio Giovinazzi, who made his qualifying debut (replacing the as yet unfit to drive Pascal Wehrlein) for Sauber, and finished 16th. His team-mate Marcus Ericsson managed to qualify 15th. Kevin Magnussen took 17th for the second-placed Haas F1 car.

The tough times continued at McLaren with Stoffel Vandoorne qualifying no higher than 18th place, dropping out in Q1. While Lance Stroll, the much-talked-about Williams rookie, managed to crash during P3, and followed that up with a 19th place on the grid. The only driver who is behind him on the grid for the Australian GP is Renault's Jolyon Palmer.