The 2016 season of Formula One hasn't been going very well for Red Bull Racing driver Daniil Kvyat. The Russian driver's first incident took place during the first corner of the Chinese GP, where he took the inside line, forcing Ferrari driver Sebastian Vettel into his teammate Kimi Raikkonen. This resulted in damage to both Ferrari cars in that race. While most agreed that this was purely a racing incident, what happened the following race at Sochi was met with more criticism. 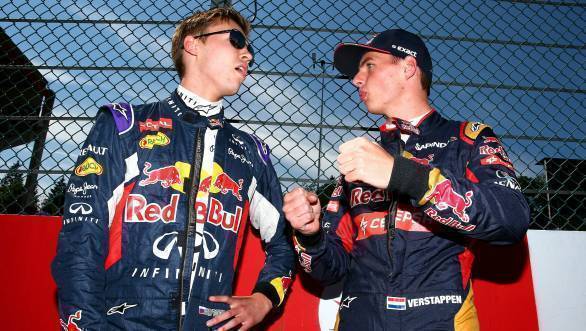 At the Russian GP, Kvyat shunted Vettel during the first lap on consecutive corners, with the second shunt decommissioning Vettel's car from the race. Kvyat's teammate Daniel Ricciardo also got caught in the fray and spun out, resulting in Red Bull Racing scoring no constructor's points at Sochi.

As a result, there were rumours that Kvyat would end up swapping seats with Max Verstappen from Toro Rosso. The rumours, of course, came into being in the aftermath of the incident, with Vettel and Ricciardo both not amused by the Russian's "suicidal" and "impatient" driving, for which he has since apologised.

However, in a rather aggressive move, Red Bull has confirmed that Daniil Kvyat has indeed been dropped from the Red Bull Racing team, and switched to the Toro Rosso team. Max Verstappen, son of former F1 driver Jos Verstappen, who also became the youngest driver ever in F1 when he joined the grid in 2015, has been promoted to the Red Bull team where he will partner Daniel Ricciardo.

Christian Horner, Team Principal of Red Bull Racing, has said that Kvyat now has a chance to work on improving his skills in an environment that he is already familiar with, adding that the team was very pleased to have Verstappen on board.

The move to swap the two drivers is rather extreme, with Jenson Button having come out in support for Kvyat, sending out a tweet that says, "Really? One bad race and Kvyat's dropped. What about the podium in the previous race? #Shortmemories."

We've got to say that we agree with Jenson on this one.