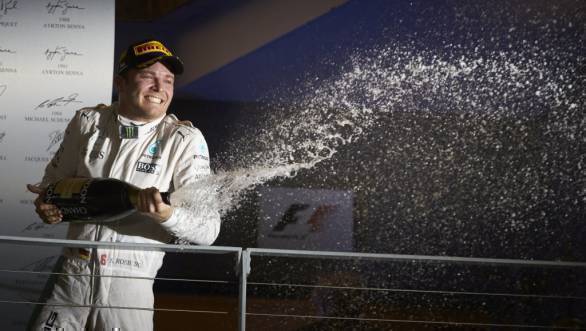 Nico Rosberg celebrates his win at the 2016 Singapore GP

Victory at the 2016 Singapore Grand Prix has ensured that Nico Rosberg moves to the head of the F1 Drivers' Championship standings once again. It was the German driver's third straight win of the season, which means he now leads the title race by 8 points over team-mate Lewis Hamilton.

Rosberg was on pole at Singapore, and maintained his lead over the course of the race, only to feel the hint of a threat from Red Bull Racing's Daniel Ricciardo during the closing stages of the race. Ricciardo, who had switched to super soft tyres with just 12 laps left in the race, managed to put some pressure on the leading Mercedes. Ricciardo had eleven laps with which to do away with Rosberg's 22 second lead, and he set about reducing the gap by around three seconds a lap. Unfortunately for the Australian driver, he ran out of laps with which to make his move, ending the race less than half a second behind Rosberg who crossed the chequered flag first.

Lewis Hamilton, defending champion, could do no better than third place, which meant that he has some amount of catching up to do in terms of the driver's championship. Hamilton, with 265 points, trails Rosberg who has 273 points, by eight points. He has six races with which to regain the lead and aim for his fourth world championship title.

The Singapore GP wasn't without its fair share of nail-biting moments. The Safety Car made its appearance, as it usually does at Singapore, to remove Nico Rosberg's crashed Sahara Force India. The Safety Car remained on track for two laps, and when the race restarted, a marshall was left floundering, having to run out the way as cars barrelled towards him, a matter that is being investigated by the FIA now.

The star of the race, however, was Ferrari's Sebastian Vettel, who charged all the way from last on the grid to fifth place, one position behind his team-mate Kimi Raikkonen. Max Verstappen could do no better than sixth, after a difficult race. Fernando Alonso put in another strong drive to finish seventh, with Sergio Perez taking eighth place for Force India. Daniel Kvyat finished the race ninth, marking his return to points, while Kevin Magnussen took 10th for Renault.