Nico Rosberg was in a class of his own this weekend. Initially setting a blistering lap time early into qualifying, he then went on to win the race with a comfortable lead over the pack that followed. Rosberg also made history by becoming the first ever winner of the European GP at the Baku City Circuit in Azerbaijan. 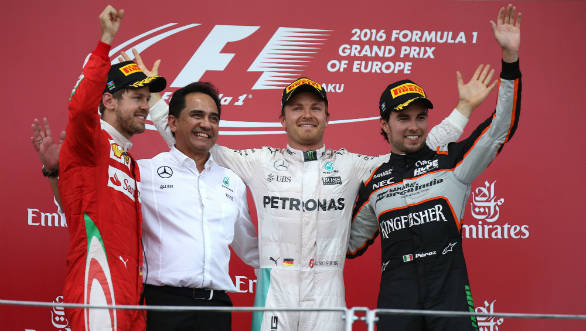 Right from the green lights, Rosberg's position remained unchallenged until the chequered flag. Team-mate Lewis Hamilton started the race at P10 and managed to climb up to fourth position but then began facing ERS issues just as he attempted to pass Perez. Hamilton had to settle with a fifth position finish.

Force India's Sergio Perez chased after Rosberg initially, but then got passed by Sebastian Vettel on lap 6 as he pitted early to switch to softs, finishing the race in 3rd. Vettel then gunned after Rosberg throughout the race, but could only manage to reduce the gap to 16.6 seconds as he went past the finish line.

Mclaren's weekend was the polar opposite to that of Rosberg's  Button just managed to score a point, while Alonso was forced to retire due to downshifting issues.

The next race will be the Austrian GP on July 3, held at the Red Bull Ring in Speilberg.