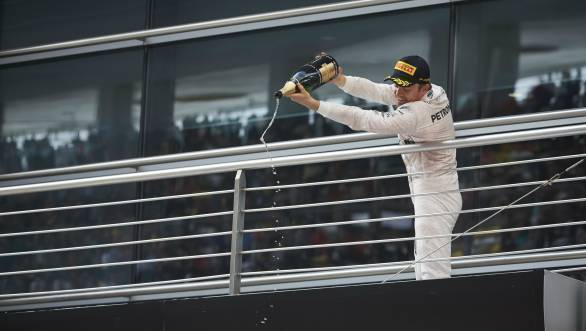 Of the three races of the 2016 season of Formula 1 held so far, Nico Rosberg has been victorious at all. His most recent win came at the Chinese GP, a race for which he was on pole, took control early on and never looked back.

The race began with some amount of trouble for Rosberg, in that he was passed by Daniel Ricciardo in his Red Bull RB12. However, various collisions up and down the order meant that the track was strewn with debris that resulted in a puncture for the Australian driver. Rosberg meanwhile had gotten back to the front of the grid, a position that he maintained through the race, crossing the chequered flag first, thus extending his lead in the world championship to 36 points.

Behind him, though, there was chaos. Sebastian Vettel and Kimi Raikkonen had a collision that resulted in damage especially to Kimi's car. Vettel wasn't too happy about it, believing that the crash had been caused by Red Bull's Daniil Kvyat, who he would later have an argument with just before the podium ceremony. However, Vettel still made it to second at the end of the race, while Kvyat, who maintained he was doing nothing more than racing, finished third.

While the top three positions seemed pretty definite by the 21st lap of the race, there was plenty of overtaking going on for the places further behind. To begin with Ricciardo managed to muscle his way through the grid, even managing to pull off a terrific move on Lewis Hamilton, en route fourth place. Raikkonen managed to make it back to fifth place after what was a far from ideal race for him.

Felipe Massa meanwhile played spoilsport to Hamilton's attempts at moving up the order. It was the Williams driver who stayed very firmly in sixth place, which meant that Hamilton had to settle for seventh.

Behind them it was the usual suspects that appear to be making it to the top 10. Max Verstappen took the first of the Toro Rosso's to eighth place, with Carlos Sainz Jr. finishing ninth. Valtteri Bottas rounded off the top 10.

The big disappointment of the race was Romain Grosjean. While the Haas F1 team has had two very good results, with points scoring finishes at the first two races of the season, Grosjean had a troubled run, even telling his team over the radio that the car was "undriveable". He finished 19th, ahead of Felipe Nasr, Rio Haryanto and Jolyon Palmer, in a race that saw no retirements.