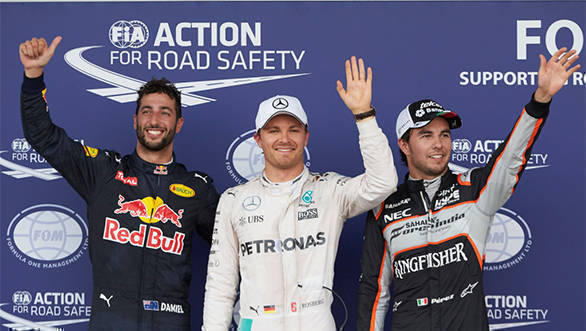 Lewis Hamilton on the other hand had a hard time at qualifying today, getting blocked by Hulkenburg, plenty of near misses with the barriers. Hamilton eventually collided with one in Q3, forcing him to retire and settle with P10. The real 'on-the-edge-of-your-seat' moment however, was in the final moments of qualifying, when RBR's Daniel Ricciardo and Ferrari's Sebastian Vettel set identical lap times of 1:43.966. Ricciardo will start the race at P3 in front of Vettel due to the Australian completing the lap first.

Meanwhile, both Mclarens couldn't keep up with the pack and settled with Alonso at P14 and Button at P19.

The European GP will commence tomorrow at 13:00 GMT.