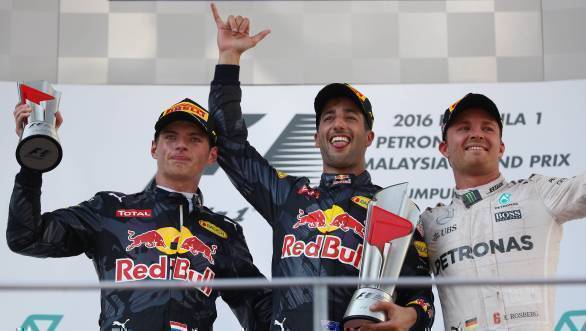 Daniel Ricciardo won the 2016 Malaysian GP ahead of Red Bull Racing team-mate Max Verstappen. Finishing third at Sepang was Nico Rosberg, who managed to extend his lead in the 2016 F1 Driver's Championship, while his team-mate's championship hopes seemed to blow up, along with his engine.

Indeed, it was Mercedes' Lewis Hamilton who was leading the Malaysian GP, looking set to take his seventh win of the 2016 season. He was 20 seconds ahead of Ricciardo, when, during the closing stages of the race, Hamilton's engine blew. Of course, given that it happened at a critical point in the season, and given that it's only Hamilton's engines that appear to have blown up this year, the Briton said "Someone doesn't want me to win this year". He also said that Mercedes owed him an explanation for the engine failures he'd suffered this season.

Meanwhile, Rosberg's charge to third hadn't been all too easy. During the first lap of the race, the German driver was tapped by Ferrari's Sebastian Vettel, which pushed him down to the back of the field. The Ferrari was out of the race immediately, while Rosberg had to work his way back up the pack.

After two virtual safety car periods, Hamilton was out in the lead, with Ricciardo and Verstappen behind him. Meanwhile, Rosberg and the Kimi Raikkonen in the Ferrari, were beginning to have a proper fight for fourth. But on the 39th lap, Rosberg managed to get ahead, even while clipping the Ferrari, later earning a ten-second penalty for the move.

But up ahead, on the 40th lap of the race, Hamilton's Mercedes gave up, and a very upset driver got out of the car. Red Bull driver Daniel Ricciardo found himself in the lead, with Max Verstappen second, with Rosberg safe in third place.

It was Red Bull's first 1-2 finish since the 2013 Brazilian Grand Prix. And it was Ricciardo's fourth F1 win.

The championship standings now see Rosberg with 288 points, while Hamilton has 265 points and Ricciardo has 204 points.